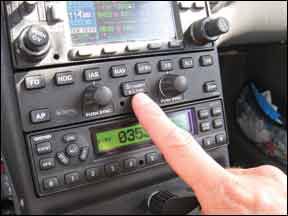 I’m sure you’ve heard the crudity about likening opinions to a certain anatomical feature that every human body is equipped with. But not many of us are actually paid to have opinions and because the staff of Aviation Consumer is among that chosen few, it’s worth a few words to explain how we do what we do. (Some of our opinions get us likened to the aforementioned body part, but indulge me here. There’s a point hovering just ahead.)

Editors are basically diviners of sorts. There’s no magic formula that tells us what to print; we don’t have time or resources to do extensive surveys; companies and advertisers—at least at this magazine—don’t drive editorial decisions. We read the e-mail, talk to subscribers and travel to learn what’s on the minds of readers—what they’re interested in, what they might want to buy.

There’s also a sea change afoot. A big one. I’m not sure I can trace its exact dimensions, but the gist of it is this: Aircraft owners still have money to buy things and do upgrades, maybe not as much as they once had, but there’s still money out there. But owners—at least those who subscribe to this magazine—are clearly much more demanding about how they’ll spend it and they may take longer to reach a buying decision on everything from kneeboards to avionics. And that’s what shapes our job around here.

In testing and recommending products, we have to get ourselves inside the heads of our reader/buyers and ask the
questions they would, trial the products as they would and crunch the pros and cons as they would to reach a fi nal buying decision. Obviously, because everyone sees things a little differently, not everyone will agree with our opinions. See John Jones’ letter on the opposite page. Some of these letters are what I call, Dear Idiots letters. And that’s OK. I have a thick skin and this sort of thing goes with the job.

When we arrive at our recommendations, we try to do so not to please the largest number of readers because they agree with us or to coddle manufacturers, who rarely agree with us, but to overlay what we think are the typical reader’s requirements and concerns. Given the aforementioned higher threshold for pushing the buy button, this job is, I think, more challenging than ever. And I’ve been doing it for awhile.

Operating as we do in reader surrogate mode, we sometimes recommend products we might not personally like much, but which fi t the reader/buyer brief. An example? We’re hitting the coverage of iPad-related products fairly regularly. Now I own an iPad. I like it just fi ne. But from its fi rst introduction, I thought the thing was oversold and overblown and far from the game-changing technology it’s touted to be. But many readers don’t agree with that view and the iPad has inspired a lively aviation apps market. I even use some of these myself, even if they haven’t changed my game. Our reader mail tells us to cover the iPad, so that’s what we do, making the best recommendations we can, given what we imagine our readers interests to be.

It would be disingenuous to suggest we don’t spin off in the wrong direction sometimes. Or miss key points in a product or service that readers would like to see discussed in detail. But, as an old newspaper editor I used to work for said, if you get it wrong today, you can try again tomorrow. For us, the do over is next month, but I think you get the point. —Paul Bertorelli