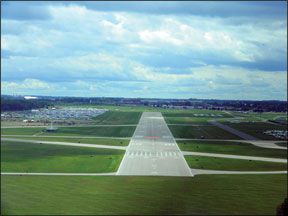 Managing editor Larry Anglisano took the accompanying photo as we were on final for runway 27 at Oshkosh. It was at 3:15 PM on Sunday, the day before the official opening of AirVenture, a time when the airport has historically been bursting at the seams with airplanes, regardless of the weather. I was astonished by the relative absence of airplanes on the right (north) side of 27.

I later learned that the overall number of visitors was consistent with previous years, and the vendors I spoke with said crowds and sales were good. Nevertheless, the aircraft parking areas told their own story through the show—there was room for a lot more airplanes. For many years, my private measure of overall general aviation health has been how full OSH gets at AirVenture.

I thought of the intro philosophy class discussion about the glass being half full versus half empty. Rather than debate esoterics, I feel that the more apt approach as to how to view our glass containing valuable general aviation essence is that of the Chicago Cubs fan: He’s afraid that someone will knock the glass over. Our industry seems fragile in many ways—avgas is going away whether we like it or not, airports are under attack, costs continue to increase faster than inflation and pilot numbers are down. Yet, as I walked around Oshkosh, I saw that there were many hands doing their best not only to guard the glass but also pour in more elixir.

For the first time in many years, the crowd didn’t seem to be made up almost entirely of older white guys. I saw more 20-somethings and teenagers than I was used to, more women and more of a racial cross-section. While it wasn’t a big difference, it was encouraging, because the only hope of long-term survival of general aviation is to massively widen its appeal.

For years, the EAA has spoken of its welcome to visitors from other countries—who knew that it would become such a driver in selling U.S. aviation? Manufacturers and mod shops in this country tell me that a third to half of their sales are now overseas. I saw the evidence walking around at Oshkosh this year—flag pins and numerous languages spoken within my hearing.

Of course, it’s not all good news. I spent time talking with some of the folks involved with getting an avgas replacement up and running. I came away of the opinion that we have at least two unleaded fuels that meet certification requirements right now. However, issues of manufacture, distribution, insurance, quality control along the distribution system and resistance by oil companies and some FAA employees mean that challenges of getting it into our tanks remain.

At the same time, the developments in the aero-diesel world seem to be coming about at an increasing pace. Will retrofit diesels offer a way to get universal aviation fuel availability and better fuel specifics than gasoline engines?

I keep hearing folks bemoaning the dearth of new products. Yet, the number of new apps or upgrades to apps that came out was eye watering. In the hardware world, the Cirrus G5 is being delivered and overall sales are up a reported 32 percent over last year. I think manufacturers are realistically looking at development costs and carefully researching markets before bringing out new hardware. For example, PS Engineering introduced its PAR200, a certified comm radio with built-in audio panel, for under $3000; the Skycraft SD-1, single-place, Light Sport airplane priced at $50,000 made its appearance; the Terrafugia flew and I’m looking forward to Avidyne’s slide-in replacements for the Garmin GNS 430 and GNS 530.

I left Oshkosh not caring whether the glass is half full, half empty or how big it is. What matters is that there’s good stuff in it. Yes, there are plenty of threats surrounding it, but there are determined people fighting for it—and we’ll keep reporting objectively on all of it.