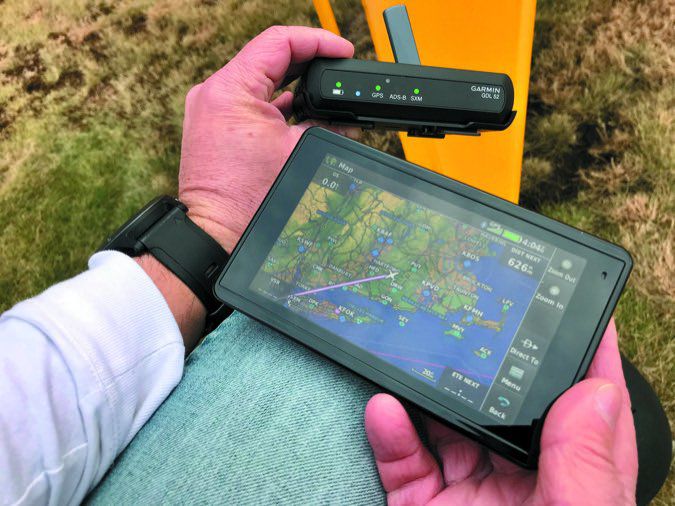 With little fanfare, last fall Garmin released the GDL82 low-cost ($1795) ADS-B Out solution. Along with the uAvionix SkyBeacon, we think it makes practical sense for lower-end aircraft. Read about both in the February 2018 Aviation Consumer.

But since the GDL82 doesn’t have ADS-B In, you’ll need to select a portable solution if you want ADS-B weather and traffic. Garmin covers all the bases with its new GDL50-series portable weather receivers. But with no fewer than six different models (including remote-mount versions) deciding which one suits your flying will take some thought. If that’s not enough, you’ll need to decide whether to play the traffic and weather data on a tablet, on a portable GPS or on a panel display.

In this article we’ll help sort it out with a look at the GDL50-series hardware options and how they interact with Garmin’s Pilot tablet app and portable GPS units.

We looked at the GDL51 in the portable SiriusXM roundup article in the November 2017 Aviation Consumer, and since then Garmin has expanded the line. The new GDL50 series replaces the GDL39 3D portable ADS-B/GPS receiver. While we always thought the GDL39 (and remote GDL39R) was a good performer, the footprint was a bit bulky for stashing on top of the glareshield.

The new devices are completely redesigned and all three portable models (GDL50/51/52) share the same chassis. They stand 4.9 by 1.3 by 3.4 inches, weigh .75 pounds and have built-in antennas, but have inputs for external antennas. The receivers have an anti-skid base to keep them from sliding around when on the glareshield and Garmin has a securing base mounting bracket and a suction cup mount for the cable.

The base model is the $799 GDL50 and it’s equipped with a dual-channel (978/1090 MHz) ADS-B In traffic receiver. There’s no ADS-B Out, of course, but the device outputs the ADS-B data via Bluetooth to tablet, smartphone and Garmin portable GPS displays. More on that in a minute.

Power comes from an internal lithium-ion battery that runs for nearly eight hours when fully charged with the supplied Micro-B USB cable. The device is stone simple to operate. There’s a power button on the left side of the case, plus annunciators on the front that show status of the battery, receiver and Bluetooth connection.

Priced at $699, the GDL51 is a SiriusXM receiver and doesn’t have an ADS-B receiver, although it does have a built-in WAAS GPS for sending position, speed and backup attitude data to Garmin’s Pilot app and select portable GPS units.

The flagship device is the GDL52 and it’s priced at $1199. It has a dual-channel ADS-B receiver, WAAS GPS and also a SiriusXM receiver for broadcast datalink weather and SXM entertainment. Let’s take a look at how these devices interface with Garmin’s Pilot app and portable navigators.

The GDL50-series Bluetooth receivers connect with a Garmin Pilot subscription-equipped smartphone or tablet (iOS and Android) via the Connext tab in the main menu. Once connected, the Connext submenu shows the status of the ADS-B and SiriusXM receiver. For ADS-B, you can see active ground stations and the signal quality. Unless you’re in close proximity to the ADS-B ground station, don’t count on reeling in weather products when you’re on the ground. This is a major benefit of the SiriusXM-equipped GDL51 and GDL52, as SXM generally works reliably on the ground.

If you’re interfacing the GDL with the aera660 portable GPS, a dedicated Weather tab is where you select the weather data source—either GDL FIS-B weather or SiriusXM. No, you can’t display both sources of weather at once, but Garmin’s software is smart enough to display the more current weather products of the two. If you select the Auto tab, the system defaults to SXM as long as the GDL51 or GDL52 receiver is connected. If a weather product has yet to be received by SXM, the system is also smart enough to display the equivalent FIS-B ADS-B product, if it’s received. The receiver can queue the weather from ADS-B and/or SiriusXM while the display device is sleeping or turned off so it automatically updates when you power the screen back on.

The Products tab on the aera660 Weather page is where you select which weather products you want to see, which in the case of the SiriusXM receiver will be governed by which SXM subscription you own. Both the aera660 and Garmin Pilot app are equipped to display Nexrad composite and base reflectivity, satellite mosaic, echo tops, winds aloft, temps aloft, lightning, storm cells, METARs, AIRMETs, SIGMETs, TFRs, PIREPs, freezing level, turbulence and icing forecasts.

The aera660 also overlays the weather data on the Map page when you turn the Weather option on in the Map Options submenu. You can also animate the weather.

The GDL50/52 ADS-B receivers automatically adjust the traffic advisory (TA) sensitivity level to reduce nuisance alerts. For example, traffic alerts are issued when the threat traffic is predicted to be within a specified volume of airspace around the host aircraft in a specific amount of time. Of course, if your aircraft isn’t ADS-B Out equipped, you’ll likely miss some traffic that might otherwise be uplinked from a ground station.

But in a full-up ADS-B Out interface, the GDL50/52 portable receivers provide an advanced traffic interface thanks to Garmin’s TargetTrend relative motion software. TargetTrend is used on Garmin’s panel displays—everything from the GTN retrofit navigators to the G1000 through 5000 integrated avionics suites—and it’s also embedded in the Garmin Pilot app and in the software of the aera660 and GPS795/796.

TargetTrend—which is velocity based—gives you a real-time indication of where the traffic target will be in respect to the aircraft’s position as it flies along. On a traditional traffic display you might be able to figure out where the threat target is moving, but you might not be able to figure out if you’ll overtake it or not. There’s also TerminalTraffic that enables ADS-B surface targets to be overlaid on the SafeTaxi georeferenced surface diagram within the Pilot app and on the portable navigators.

We like that the GDL receiver can connect with multiple devices/displays at the same time. For example, with the optional power/data interface harness you could hard-wire the GDL to two additional displays, for a total of four when you count the two Bluetooth displays. Maybe you have the GDL connected wirelessly to an iPad and also an iPhone but also want to connect to a hard-wired aera660 or GPS796.

Since the GDL51 and GDL52 receive SiriusXM entertainment programming, you can access SXM channels directly on the Pilot app and wirelessly connect the audio to a Bluetooth-equipped audio panel. The GDL51/52 also have wired audio output (a 3.5 mm stereo jack) for wired music out.

All new GDL models come with a one-year subscription to Garmin Pilot, which you’ll need to interface the devices to a smartphone or tablet. No, ForeFlight won’t work.

Which model GDL you select really comes down to whether you want SiriusXM or not. If you must have weather data on the ground when an internet or cellular connection isn’t available, the GDL52 is a top pick because you’ll get reliable weather, plus ADS-B traffic.

But if you can live without weather data on the ground, save the $400 (and the SXM subscription, although there’s a $200 rebate if you sign up) and go with the base GDL50.

Click here to watch a video of Garmin’s GDL50!