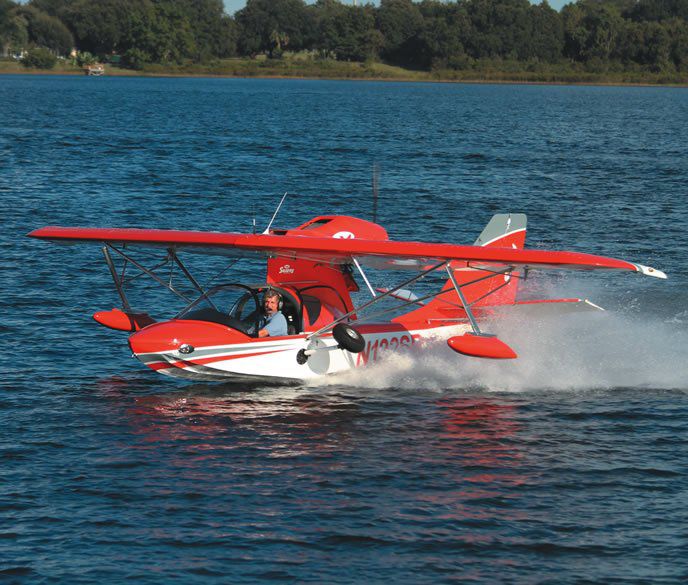 Our editor’s choice awards are all about innovation and value. As we look back at the last 12 issues of Aviation Consumer, we find no shortage of credible products, especially in the ADS-B and aircraft consumable markets. But no single product or company stood out for being the most innovative.

So to keep our high standards in check, we won’t hand out an award for product or company of the year. Instead, we’ll present a combination of a dozen products and companies that we believe deserve equal recognition for being the best of the best.

We’ll start with the Searey Elite pictured in the lead shot above. With a base price of $158,000, the factory-built SLSA Elite isn’t a cheap toy. On the other hand, we think Searey Elite buyers will get a lot for the money.

The Searey Elite is powered by the 115-horsepower Rotax 914 turbocharged engine, offering more takeoff and climb authority should you operate it around your hot and high mountain lake house.

While the Searey is no stranger to the water (Progressive Aerodyne has been around since 1992), the Elite is a fresh model built in Aerodyne’s new manufacturing facility in Taveres, Florida. For more, visitwww.searey.com.

Part of what continues to impress us is the performance of the Beringer ALIR antiskid system, which uses an adjustable differential braking pressure regulator to prevent wheel locking. Beringer wheel and brake kits are available in four-, five- and six-inch wheel configurations and sell for around $1100 per wheel. Go to www.beringeraero.com for a complete list of systems, accessories and pricing.

Yes, Garmin’s GNS430W WAAS GPS navigator is a few years out of production. No, it doesn’t have a touchscreen. But yes, a GNS430W still makes sense for lesser aircraft in desperate need of a basic and affordable single-box IFR upgrade. Plus, its WAAS GPS engine is an approved position source for driving an ADS-B transponder, including the GTX330ES, KT74 and others.

With a good eye you might score a well-maintained GNS430W from a reputable shop for around $6000. Better yet, Garmin’s Flight Stream wireless bluetooth device breathes new life into the GNS430W (and the larger GNS530W) since you can enter victor airways into its flight plan bank via Garmin’s Pilot tablet app with a push of a button. Garmin tells us it plans to support the GNS430W well into the future.

OpenAirplane says that a single checkout at one FBO allows a pilot to rent aircraft from other FBOs across the country. We tried it. It works.

With just six participating FBOs when the Internet-based OpenAirplane went live in 2012, the service has grown to 79 locations with over 260 rental aircraft available around the country.

The premise is simple—a pilot signs up with OpenAirplane through its website, provides information on his or her flight experience and rental insurance and then schedules a thorough Universal Pilot Checkout flight review.

Signing up for OpenAirplane is free and only the hourly flight time for the rental aircraft is billed (a rate set by the owner, while OpenAirplane takes a 10 percent cut).

Our experience with OpenAirplane was quite favorable. Once checked out, we rented a clean IFR-equipped Cessna 172 at Orchard Beach Aviation in Manistee, Michigan, and found that the OpenAirplane process was as straightforward and convenient as the company advertises. Contact www.openairplane.com.

Just because you rely on your maintenance shop to look after the inlet air filter on your engine doesn’t mean all filters are created equally. We evaluated the three FAA-approved filters—Donaldson, Challenger and Brackett—and found that while they are all effective at filtering unwanted contaminates, we think Donaldson’s dry pleated design offers the best combination of airflow, good filtering properties and convenient replacement and servicing procedures. For more, visit www.donaldson.com.

After some resistance, we ditched a well-worn backpack for good in favor of Sporty’s Navigator flight bag. After enduring two years of abuse, it is proving to be rugged and spacious, plus it has plenty of padded pockets in all the right places.

At 10x22x11 inches, it has both headset and tablet computer pockets, plus four additional external pockets of varying shapes and sizes. Our only beef is the amount of space the bag occupies in smaller cabins, but that’s a compromise with many full-sized flight bags.

Portable cabin cooling devices may seem crude and perhaps intrusive, but they are a cheaper and simpler alternative to maintenance-intensive aircraft air conditioning systems.

At $299-$429, the B-Kool portable cooler series holds 25 pounds of ice and can pump roughly two hours of cool air. We like its smaller size (11x18x16) compared to other portable coolers we evaluated. Place it in the baggage area and point the flexible ducting into the cabin.

It plugs into a cigarette lighter and is easy to drain the water after the flight. Hot and smelly passengers and pilots will appreciate the comfort. For more information, visit www.b-kool.net.

Just because the dominant iPad is so popular for cockpit use doesn’t necessarily mean it’s the best choice. To find out for sure, we put Apple’s mid-sized mini3 head-to-head with Samsung’s mid-sized Galaxy Tab S 8.4. And man, it was a close call.

As impressed as we were with the Samsung Galaxy’s display, battery and processing performance, we slightly favored the iPad mini3 because of navigation app and mounting hardware compatibility. There are simply more options for the iPad than there are for the Samsung. As for the full-sized iPad, we think it has a decent screen, but we also think its body is too bulky for use in smaller cockpits.

That’s because Continental isn’t backing off on its Centurion Jet A-burning piston engine technology, even if the current global demand seems to be cooling.

When we visited Continental’s diesel manufacturing plant in St. Egiden, Germany, we found it building a couple of Centurion engines a day, while ramping up volume.

Continental is moving forward with its 300-HP six-cylinder diesel, an engine that’s based on a Mercedes-Benz automotive engine.

For certain, we think an innovative Continental is positioned to be the industry leader should the diesel aircraft engine market really come alive.

We’re continuously impressed with PS Engineering’s drive to advance its products. Just as it hits one out of the park, it goes back to the think tank to develope something better. The latest is the $2395 PMA450 audio panel, which takes the already impressive-performing PM8000-series to the next level. The PMA450 has a function it calls IntelliAudio, which is based on the Air Force’s dimensional sound technology. With IntelliAudio, you can place each comm radio in different locations within the headset so the brain can more easily discern one source from the other. We flew with it and we liked it better than Garmin’s audio panel. Visit www.ps-engineering.com.

One of the more neglected components on the airframe is the aircraft battery enclosure. Its replacement is often deferred because of the riduculous price of many OEM enclosures. When the battery box on one of our evaluation aircraft began spewing corrosive battery acid onto the airframe, we took a closer look at Bogert Aviation’s aftermarket boxes and liked what we saw.

Bogert has FAA-and PMA-approved replacement enclosures for most Piper and Cessna applications and they are much improved from original designs. This includes a venting system which allows air inflow and outflow through the box.

What impressed us the most is Bogert’s build quality. The boxes are TIG welded and finished with powder coating, while the stainless steel vent tube is welded to copper fittings. The hardware isn’t inexpensive ($800-$1100), but we think it’s a better choice than many OEM replacements costing three times as much. Visit www.bogertaviation.com for model compatibility.

There are several new portable options for bringing texting and talking capabilities to the cabin. This includes Iridium’s Go and the DeLorme InReach Explorer. We tried them both (in addition to Globalstar’s Sat-Fi, but it didn’t work in the air), and favored the handheld DeLorme Explorer for its all-in-one text messaging, satellite tracking capability and SOS emergency functionality.The Iridium-based Explorer also impresses with a small, yet rugged case that’s easy to manage in the cockpit, plus fantastic battery endurance.

The DeLorme Explorer retails for $379 and requires one of several annual or monthly data service plan options. You’ll find this pricing at www.inreachdelorme.com.