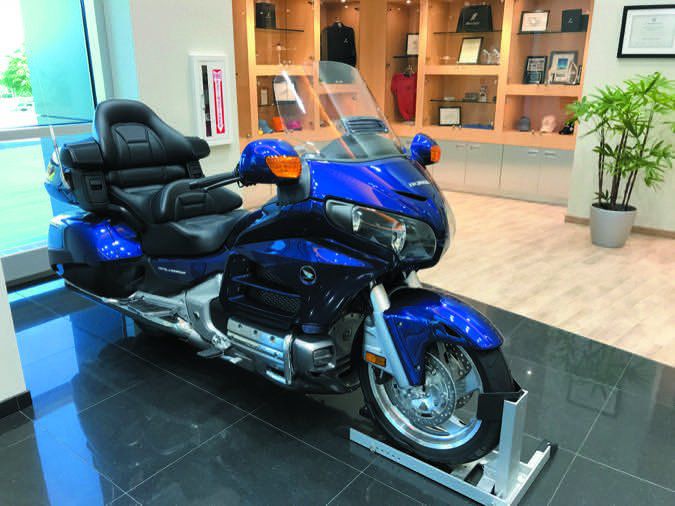 The Gold Wing in the main photo was shot at Honda Aircraft Company’s massive headquarters in Greensboro, North Carolina. It’s the first thing you see when entering the main lobby, and presumably it’s there as an important reminder of Honda’s heritage. In 1946, Soichiro Honda established the Honda Technical Research Institute to develop machine tools and engines. In 2017, the brand name is delivering an ultramodern jet. For motorheads and curious consumers alike, the Honda timeline of milestones is an interesting read.

While studying in the late 1980s, a required reading in my business lecture was Robert L. Shook’s Honda: An American Success Story. Despite some foggy school daze, the story of Honda’s success in America was so intriguing that I embarked on my own academic research focusing on the Honda brand loyalty, which was gaining momentum at the time. I’m among the loyal, having invested plenty in Honda products. My stable currently houses no fewer than five of them, including two vehicles (one from the Acura division), a motorcycle and several pieces of Honda power equipment. Reliability and performance keeps me coming back and I’m not easy to please.

A Honda Aircraft marketing exec said customers like me (but ones with $5 million to spend) are drawn to the HA-420 jet simply because it’s a Honda. The company has notoriously ridden the sails of brand loyalty partly because of brand recognition and quality, but I’d call this the ultimate test. Judging by the investment in the 80-acre operation at Greensboro Piedmont Triad Airport, Honda isn’t just testing the market and it’s easy to speculate what other products could be in the works. Piston models? UAVs? There’s more than the jet, in my estimation.

The visit to the spotlessly clean and highly structured aircraft division reinforced a lot of what I learned a long time ago about Honda’s corporate obsessions and customs. While the white coat and green cap Honda corporate way of life is clearly on at Honda Aircraft, building and selling the HondaJet isn’t like moving generators and Civics. Or maybe it is. For certain, reliability and field support of the HA-420 hangs in the balance just like it did for the automotive line in Honda’s early days. Historically in Japanese autobiz culture the buzzword was Kami-sama, or God—which is how the customer was to be treated.

Honda has always enforced a well-organized dealer network, and for a handful of HondaJet dealers in the U.S., initial support of the HA-420 won’t be easy. There are now over 40 aircraft in service as we go to press, plus some in the delivery process. There will be a shop learning curve, plus the typical growing pains of a complex first-gen business jet. Flight Safety, which is housed on Honda’s campus, is responsible for maintenance and avionics training for the jet and in my experience, the company offers some of the best type training available. Current HondaJet dealerships include TAC Air in Utah, Cutter Aviation in Arizona, Banyon Air Service in Florida, Des Moines Flying Service in Iowa and the in-house dealer at company headquarters. There is more support abroad. Regardless of location, Honda culture expects smiling happy faces from workers and customers.

I think Honda’s entrance into the certified aircraft world draws at least some parallels with the automotive market in 1986 when Honda entered the luxury car market with its Acura line. At the time, no other Japanese car maker ever had marketed another vehicle line in the U.S. under a separate division. While the product spoke for itself (the first Acura Legend was a huge success and the automotive press gushed over its fit, finish, quality and performance) there were sizable challenges to overcome. After all, it would be easy for buyers of higher-end BMW and Mercedes cars, to name two, to dismiss the Acura line because it came from a company that also made inexpensive economy cars. But like other Honda products, the Acura was so enticing that it quickly sold itself. How the HA-420 fares against an Embraer or Cessna jet remains to be seen, but Honda’s old-school culture and earned respect in other markets can’t hurt.