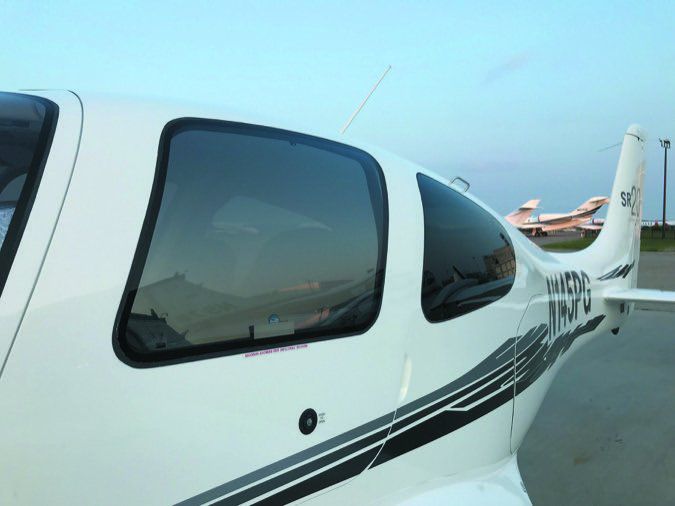 The Jet Shades product is the direct result of a pilot trying to solve a nagging problem: extreme heat in the cabin of his Eclipse Jet. “I’d take off single pilot in that airplane and the cabin heat was just killing me,” said company founder Kevin Duggan.

But it’s not just about reducing heat. Skin cancer should be a real concern in sun-splashed cabins, as should the long-term health of the aircraft’s avionics and interior plastics.

Tired of sticking random things around the cockpit windows to shield the sun-and trying products sourced at auto parts stores and even car dealerships (without much success)-he developed the Jet Shades for use in the cockpit (and passenger cabin), which can be left in during flight. We tried a set and were pleased with their performance, impressed by their construction and frustrated by fitting them, proving that interiors aren’t all the same among some models.

The shades are designed to be easily removable and they use no Velcro to stay in place. Who needs that mess when the adhesive melts in the sun? Instead, you install them by pushing their outer trim in place and remove them by grabbing on to pull tabs.

The shades are made of optical-quality polycarbonate-material that’s virtually unbreakable and it will not shatter. An important point is that the Jet Shades are not acrylic, which can shatter.

We bent a shade over pretty hard and it didn’t lose its shape or create any ripples in the coating. The panels are designed to be flexible, because that’s what it takes to get them in place. More on that in a minute.

Rhode Island-based Jet Shades told us that although the regulatory specs on aircraft windows prohibit tinting them more than 30 percent, this product is easily and completely removable-not requiring an STC.

The Jet Shades specs say they block 72 percent of visible light, 99.9 percent of infrared light and 44 percent of solar energy. The company makes a good point that glare can kill the contrast and visibility of tablet computers and panel displays, so the shades reduce glare by 70 percent. As for harmful UV protection, they’re said to block 99.9 percent-sunglasses for the windows, of sorts. Jet Shades has a patent for its coating.

During the early stages of its market testing, Jet Shades made the panels in two different tints, but some pilots complained that the darker tint was problematic for their deteriorating eyesight. The company experimented with a variety of tints and ultimately settled on a custom mix of heat-reflecting, heat-absorbing, light-blocking, heat-blocking and UV-blocking coating. We found them comfortable to look through with and without sunglasses.

We also found the construction of the shades to be quite good, and Jet Shades stresses that the product is made to high standards in a temperature-controlled, clean-room environment. No, these aren’t garage-made panels. The patent includes several types of sub-strates and coatings, as well as CAD-based and robotic CNC cutting processes.

Each shade has crushable trim around the entire perimeter, so as it goes into the window frame there are several bite points and the shade’s trim compresses around the trim of the window, keeping it in place.

Duggan made it clear that the shades do not touch the window-something that’s important in pressurized aircraft. Since the shade doesn’t touch the aircraft window, there’s also no passing of heat to the window. Each shade has an approximate 8-inch air pocket for small amounts of airflow from the front and rear corners of the shade.

“In pressurized cabins, we’re careful not to seal the window with these shades-that’s very important,” Duggan told us.

If you’ve flown an aircraft with separate pilot and passenger cabins you might have found that it’s difficult to equalize the temperature, even with dual-zone climate control. Plus, it’s not uncommon to have sizable temperature fluctuations between the pilot’s and copilot’s side of the cockpit, especially when the sun is dominating one side. The Jet Shades are an effective solution for balancing the temperature, while also making the air conditioning more effective.

Since these are light-limiting tinted shades, you don’t want to be flying with the cockpit shades in at night. But in the rear cabin, we don’t see any real reason to remove the shades. In our estimation, they can replace foil sunshades that might be removed and reinstalled every time you fly and park. For some aircraft, that’s a time-consuming chore. And like traditional foil shields, the Jet Shades can protect the interior from cracking and discoloration while parked in the sun. Duggan said the Sun Shades are the only aircraft-purposed shades for cockpit use in flight.

There’s also a bit of an aesthetic advantage in going with a full set of shades (as the chart above shows, you can order a full set or panels for the cockpit). Since the shades give the aircraft a tinted-window appearance from the outside, we think they boost the aircraft’s ramp appeal and also offer privacy when the aircraft is parked.

For safe storage, Jet Shades includes a microfiber storage case with each set it ships.

In our evaluation, we ordered a full set (cockpit and passenger cabin) of Jet Shades for a Pilatus PC12NG. Out of the box, the shades for the rear windows fit like a glove. But the cockpit shades-not such a good fit. We snapped a bunch of photos showing the fit discrepancies and sent them to Duggan, who quickly had another set cut and sent. They were closer, but still not an exact fit. Duggan explained that this is simply the nature of some interiors and in the case of the Pilatus PC12, he’s learning that they aren’t all identical. Others, like the Cessna Citation, are proving to be an exact fit across the board. We think as more Jet Shades end up in the field, fitting a set of shades will get easier for aircraft that haven’t been modified or upgraded. But that won’t help aircraft with custom interiors and will result in custom fitting a set.

According to Jet Shades, due to the age of the aircraft, restorations, variation in the installation of the trim and the distortion of the trim due to heat, for some models it now sends out templates that the customer can adjust to fit their specific application. From there it designs and builds a custom set of shades. Duggan told us there will be a design charge for custom shades, but the company is still in the process of figuring that out and will publish the pricing on its website. Speaking of the website, www.jetshades.com is where you start and the company sells directly to end users. The website has a catalog that’s broken down by jets, turboprops and props. Click on the appropriate aircraft and you’ll see the various shades appropriate for that model, which includes windshield and cabin window shades.

Worth mentioning is that the side window shade for the Pilatus blocked the SXM signal of a Garmin portable weather receiver.

Not Cheap, But Fair

While pricing is far from cheap, we think it’s fair given the quality and effectiveness of the product. A full set of Jet Shades for our Pilatus PC12NG testbed is $1599. That’s a total of 14 pieces. For the cockpit only (five pieces) it’s $999.

Pricing for a Beechcraft Bonanza is $599 for cockpit shades and $999 for a full set to cover all the windows. We like that the company offers the option of buying a partial set for most aircraft models. For example, you can buy a set for the windshield of a Cessna 182 for $299, for the cockpit doors and passenger windows for $499 or a full set (seven pieces for $999). Duggan said that shades for jets cost a bit more because many have larger windows, plus they’re made a bit differently than the ones made for some piston models.

Click here to see a video of the Jet Shades!