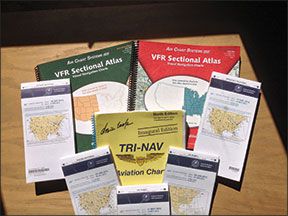 Pulse Oximeters
Your article on pulse oximeters in the March issue correctly pointed out that they increase safety, however, there is one situation where they do not and can give a pilot a false sense that all is well. The symptoms of carbon monoxide (CO) poisoning are the same as the symptoms of low blood oxygen—hypoxia—a feeling of well-being.

CO poisoning causes a pulse oximeter to give a normal or high blood oxygen concentration reading, the CO displaces the oxygen in the blood. This can cause a pilot who might otherwise be concerned to see a normal blood oxygen reading and get a false sense of security.
To be protected, a pilot should also carry a sensitive CO detector in the airplane.

I agree that the FARs are inadequate to protect a pilot against the dangers of hypoxia. There is significant variation amongst pilots as to tolerance to altitude. Pulse oximeters will definitely convince more pilots to use oxygen.

Aircraft Tugs
The article on aircraft tugs in the April issue missed a good tug that I like. Redline Aviation produces a high-quality “power-drill”-type tug called the Sidewinder. I’ve had one for years.

It utilizes a 28-volt lithium battery to power a Milwaukee drive unit that easily moves my Bonanza up a slope into my hangar. Even though it’s more expensive than the units you covered, I think the way it’s made makes it worth the price. It folds in half, making it portable, and I’ve even seen one pushing a Cessna Citation.

GTN Survey
A year ago, I had Sarasota Avionics install a GTN750/GTN650 in my Cessna 421. While its touch screen is more advanced than what I’d been flying, the underlying foundation of the GTN series did not come from the more advanced GNS480, but the dumbed-down GNS430/30. With the GNS480, I was able to accept a “full route clearance” and enter it as it was given. With something such as “radar vectors to V24,” I just went to my flight plan and put in V24, and the system would come up with all the exits automatically.

With the GTN750, you have to find an intersection behind you that is on V24 and enter it. How backward can you get?

The GNS480 would alert me when the localizer was alive, a nice safety feature when the workload is high. The GTN does not.

When Garmin came out with its first update to the units, I had my shop do it as I assumed they would have some of the upgrades I’d been requesting. Not only did they not have any new features, they disabled some that were there before the update—so I had to pay the avionics shop to restore the original software.

I feel as if suggestions to Garmin fall on deaf ears.
You would think I hate the GTN series, but that is not entirely true. I just think Garmin chose the wrong platform for creating it.

Paper VFR Charts
A quick thank you for your article on paper VFR charts in the April issue. I have subscribed to two sectionals, an area chart and my local AFD for years. It never occurred to me to shop for price on such a small purchase. I noticed in your article that MyPilotStore sold the same items for less than half of what I’d been paying once shipping is included. That’s over $30 a year for charts.
Thank you for remembering the small consumers in aviation.

The timing of your article on paper VFR charts couldn’t have been better. After using the very good Air Chart Systems product for years, just before I read your article, I was notified by Air Charts that it was going out of business. (We got word of Air Charts’ impending demise just after the April issue went to press—Ed.)

I know, I know, with my iPad loaded with charts, I don’t need paper charts, having an up-to-date backup that can’t overheat or run out of batteries or crash is cheap insurance. Look like it’s time to check out the Tri-Nav product. Thanks!

A good source of paper VFR charts is Duracharts. They print the charts in the same size and format as Aeronav, but on tear-resistant, plasticized paper. Prices are similar to other companies, and I no longer have to spend time taping up my charts along the folds as they wear out.