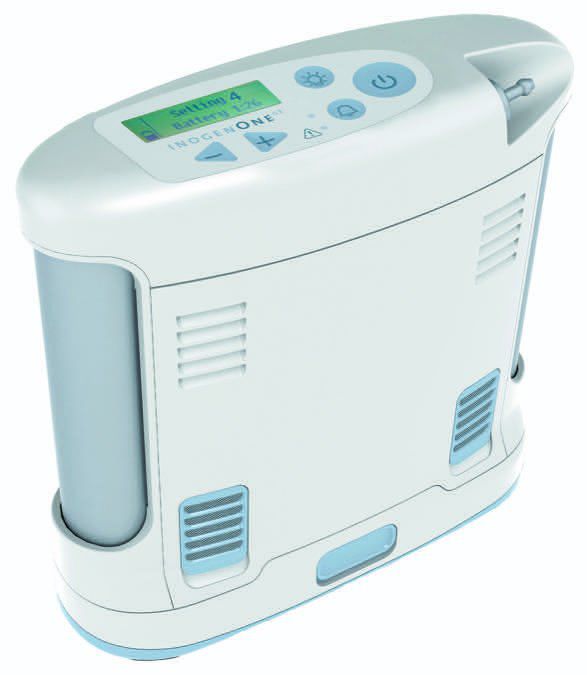 There are good reasons to make oxygen available at altitudes less than those recommended by the FAA. Face it, unless you’re using a pulse oximeter on every flight (we certainly don’t when flying at lower altitudes), you don’t really know how your physiology is reacting on a given day. We think blood oxygen saturation is an important biometric to keep on top of.

So having determined that supplemental oxygen is either a legal requirement or simply a good idea, is a portable oxygen concentrator—instead of bottled O2—a good idea? For some we think it is.

Given the clinical-focused form factor and electrical power requirements of systems we’ve looked at in the past, we all but dismissed them as impractical for use in small aircraft. But a fresh scan of the market reveals there are some viable options, mainly from Inogen.

Oxygen concentrators were developed in the 1970s to meet both industrial and consumer needs, creating a relatively inexpensive, limitless supply of oxygen. Starting in the 1980s, oxygen concentrators became an option for the oxygen-dependent, providing the COPD or congestive heart failure-afflicted with an ongoing supply of O2, and allowing freedom of movement by not being dependent on a compressed bottle.

The purity delivered by a concentrator isn’t as great as for bottled oxygen, which can deliver O2 purities greater than 99.9 percent, if you want to pay for it—which might not be necessary.

For our purposes in the airplane (and for certain industrial solutions), 95 or even 90 percent pure oxygen from a concentrator is acceptable. Unlike bottled oxygen, concentrators do not remove water vapor, and the pulsed bolus (more on that in a minute) doesn’t constantly stream across sensitive membranes, giving concentrators a desirable advantage. Face it, nobody likes dealing with dry nasal passages.

The basic technology behind modern, small form-factor O2 concentrators is a zeolitic compound. Zeolites are a naturally occurring aluminum/silicate mineral that is microporous. Scientists choose from among 40-some natural zeolites (or from over 200 man-made ones) based on pore size, which determines which molecules get trapped, and which are allowed to pass through. In this case, a zeolite is selected that when air (80 percent nitrogen) is put through the zeolite under pressure, it traps the nitrogen molecules, but allows oxygen and water vapor to pass through.

The concentrator box contains a compressor that grabs surrounding air and boosts it to roughly 20 PSI to pass through a filter. Then, a microprocessor controls the compressor speed to match the airflow set as the desired outflow of oxygen. The processor also controls the switching (think of a manifold) amongst two or more filters.

Once a filter’s zeolite is saturated with nitrogen, it can be allowed to discharge and rest, outgassing the nitrogen, while a second filter strips out the nitrogen during its turn in the cycle. Chemical engineers among us call this pressure-swing adsorption. Note that this isn’t absorption—that’s a subject for an entirely separate lecture.

So where’s the O2 in a concentrator? It’s stored in a pressurized tube where it’s pulsed—on demand— to the nostrils via traditional cannulas. Thanks to microprocessors, concentrators are smart enough to sense human breathing and flow (pulse) accordingly.

The process eventually switches back to the freshly nitrogen-depleted filter, giving the alternate zeolite canister a rest in turn, while the cycle continues.

It was inevitable that someone would consider aviation applications. Windblade Corporation took on the challenge a decade ago, working with the founders of Inogen to tweak the small Inogen One G1 system’s hardware for aviation use. It worked with the FAA to identify potential problem areas like radio interference, while addressing the concern of optimal battery endurance. The other task was modifying the system to work acceptably up to 17,999 feet. Consumer-grade concentrators are generally rated for airline travel, where typical cabin altitudes of 8000 feet are the norm.

The resulting Inogen Aviator concentrators are simple to use and they include a pulser, which flows a bolus (think of it as a single gulp of oxygen) whenever you inhale. This is much more efficient than continuously streaming oxygen that is ultimately lost between inhalations. Each unit includes a detachable battery to assure at least four hours of use if the DC power input is interrupted during flight.

The battery has a self-discharge rate of about twenty days if disconnected, or just five days if the computer-style power supply is left attached. This makes inflight recharging useful. An AC power adapter is also provided so the batteries can be kept topped off in the hangar between flights.

There are three models in the Inogen Aviation line (the G2, G3 and soon the G4) and all meet FAA guidelines for supplemental oxygen, are certified to FAA radiated emissions standards and have simple controls and decent LCD displays. The $2795 Aviator G2-1265 is the flagship unit tested to 18,000 feet. Why not higher?

While you might wear an oxygen mask above 18,000 feet, the pulse delivery of an oxygen concentrator doesn’t generally work well with a mask. On the other hand, we’ve heard reports from pilots who successfully use concentrators in the low flight levels. Still, we think backup oxygen is a smart plan.

Consider that 1265 ml/min is the maximum available oxygen flow rate, or just over 1.3 liters on the unit’s maximum output setting. The G2 weighs 7.25 pounds, including the battery, and measures 10.7 inches long and 9.5 inches high. At only 3.9 inches wide, it’s easy to wedge between the seats. Inogen says the single battery lasts up to five hours, but the optional double battery lasts up to 10 hours.

The $2795 Aviator G3 (yes, it’s the same price as the G2) has been tested to 15,000 feet and delivers 840 ml/min. What the 4.8-pound G3 lacks in output it makes up in portability and a smaller form factor. It measures 8.75 inches long and 8.25 inches high. At 3 inches wide, it might fit even better between the seats. Its single battery can last up to four hours, while an optional double battery increases the endurance to nine hours.

While it might seem like a logical plan, the Inogen concentrators aren’t practical for remote mounting because they require a key press to power on and off, plus the operator needs to have access to the front panel display. There’s also an alert annunciator.

Accessories include a higher-capacity battery pack for $495, or a spare standard-capacity battery for $395. External battery chargers are $275. Replacement particle filters are $19 each. Windblade also sells a spare cannula for $99, which also includes an inline flow-confirming spinner. The systems come standard with a DC power converter, which serves double duty for charging the battery.

Inogen says the Aviator units can be shared amongst two users, but this reduces the service ceiling. For example, the G2-1265 can be shared between two users up to 14,000 feet (reduced from 18,000 feet for one user), but this depends on demand. We’ve shared the Inogen on two occasions, but with mixed results. Plan on having backup oxygen when carrying a passenger.

We’ve been using the older Inogen G2-1080 for six years with good results. You might find this and the older G1 on the used market.

A few years ago we evaluated the OxyFly Light O2 concentrator made by Germany-based Durr Technik, reported in the March 2013 Aviation Consumer. While we liked the capability, we weren’t convinced that a unit weighing nearly 50 pounds and drawing 25 amps of current is a good across-the-board portable solution. It’s hardly budget based.

We found that the compressor heats to almost 250 degrees F, plus several mechanics we consulted with were concerned about the unit’s lack of chafe protection for the exposed wiring bundles.

We do like that the OxyFly can supply oxygen for up to six people (up to 18,000 feet) when using the Oxymizer oxygen-conserving cannula, or up to four people wearing traditional cannulas. The OxyFly’s output is 90 to 95 percent pure oxygen. The OxyFly Light is priced at $13,500 and only works on 28 volts DC.

There are plenty of non-aviation portable concentrators, but many are much larger than the Inogen units. In our research, we found that some European aviators seem to have good results with the SeQual Eclipse 5 portable concentrators, which may be available online for about $1500. The specs are 96 ml per bolus or gulp of air. Even with some performance degradation, they may match Inogen performance. There haven’t been reports of interference issues with onboard avionics and we haven’t evaluated them. If you use one, we want to hear about your experience.

Use caution with low-cost concentrators. While many can be found for as little as $300, most deliver only a 35 percent oxygen concentration, which won’t provide much benefit above 10,000 feet. Plus, altitude performance, heat and RF interference issues are unknown.

While bottled oxygen might be cheaper than a concentrator, there’s peace of mind in knowing you’ll always have a supply, instead of relying on someone to fill the bottle.

From our experience, you might discover that without any apparent direct costs (in dollars or refill effort), you’ll use oxygen more often and benefit from the lack of fatigue and better mental acuity at times when you really need to be at your best.

Our top pick is the Inogen G2-1265 for its 18,000-foot operating ceiling and simplicity. If size is a concern, consider waiting for the Inogen G4 if you can live with its 13,000-foot ceiling.

The Inogen Aviator line is sold by the California-based Windblade Corporation. Contact them at www.inogenaviator.com, 805-448-5289.

Contributor Paul Millner is a Cessna turbo Cardinal owner, the technical editor of the Cessna Cardinal Flyers type club and is based in California.