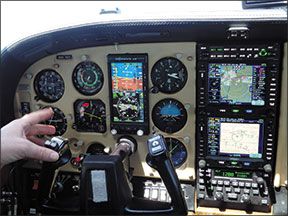 recent spirited discussion with Frank Bowlin, my counterpart at sister publication IFR magazine, got me thinking about the largely ignored aftermarket avionics training market. Bowlin pointed out that a sizable part of the critical training market is underserved, and we missed an opportunity to expose this industry failure in the glass cockpit training article in the June 2014 issue of Aviation Consumer.

That article focused on training solutions—mainly apps and desktop programs—that could save some time and money when transitioning to glass-equipped aircraft. While there are plenty of Garmin G1000 training products, our research uncovered few options for learning retrofit systems, save for a Sporty’s app that covers Aspen’s Evolution PFD. Still, I’m not convinced there can be a one-size-fits-all training solution given the variations that exist in wiring and interface configurations.

This was reinforced when I attended Garmin’s G500/GTN retrofit training course last year. The course (presented at Garmin’s Olathe, Kansas, training center) was a two-day cram session targeted at learning the ins and outs of these systems. Each student received a training manual, functional GTN750/650 navigators and a G500 flight display to use while the instructor presented real-world button-pushing scenarios as if we were programming the system in the real world. It was about as realistic as classroom training can be.

The session came to a roadblock when a discussion unfolded over programming the systems with aftermarket autopilots in the mix. For instance, several students had the G500, GTN750 and S-TEC 55X autopilot installed, but there were variations in how the systems were interconnected, particularly the way installers wired the GPSS digital steering portion of the interface. There was no way the instructor—or several product support specialists that were called to the class—could effectively teach this critical portion of the user interface because not all interfaces are wired alike. Ultimately, it’s install-specific nuances like this that put avionics shops in a training role.

When I worked as a shop-level avionics tech, it wasn’t uncommon to be thrown into training situations when frustrated owners couldn’t grasp the concept of advanced interfaces. Autopilot programming was a common snag and I heard my share of harrowing accounts of near-augers in the clag because of button-pushing confusion. But is it the shop’s duty to provide avionics training? Geoff Hill at the Aircraft Electronics Association (AEA) hinted that familiarization training is part of customer service and should tag along with a major retrofit. All indications are that the better shops are trying.

John DenDekker at Carpenter Avionics in Smyrna, Tennessee, told me that he uses the post-installation flight check as an opportunity to provide the aircraft owner with at least some training to learn the basics, although the shop isn’t equipped to provide structured training. DenDekker admitted that since his shop primarily installs Garmin equipment, including the GTN750, he points his customers to Garmin’s GTN750 iPad training app.

Duncan Aviation’s Gary Harpster noted that avionics upgrades for larger Part 25 aircraft include orientation training in a classroom setting, in addition to continued orientation on the flight line. He acknowledged that while most shops can install systems per the manufacturers’ guidelines, there are few that can fully demonstrate the capabilities of the system. That could change.

An FAA inspector once told me that the administration will ultimately require repair stations to providing customer training. While that’s asking a lot—especially with the predicted last-minute ADS-B demand—it may be the only solution in a lacking avionics training market. —Larry Anglisano