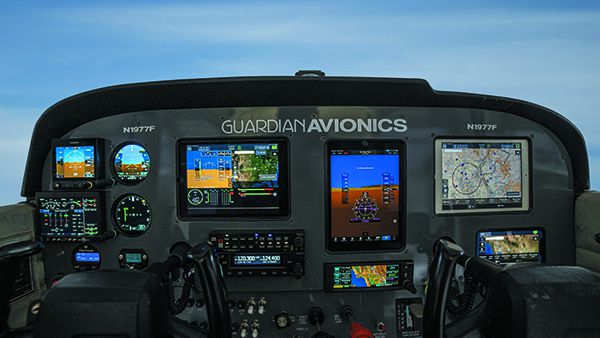 After giving a presentation to a bunch of homebuilders on ways to choose an avionics suite, more than one kit builder told me he was holding out on buying any avionics for a few years because by the time his project is ready for the electronics, iPads will dominate the panel-mount avionics market. Eh, I’m not sure that will be the case even in the experimental world where pretty much anything goes. We know what can happen. iPads run on self-contained batteries, they can overheat and shut down, plus the I/O potential between the iPad and other systems has a long way to go for IFR reliability. But check out that panel above—it’s what an iPad suite looks like on a Cessna 172.  The install comes from Guardian Avionics, and sports no fewer than four Apple devices in the mix. It’s called the smartPlane interface and it doesn’t get the attention it deserves.

Guardian says it’s the first and only iPad suite approved for installation in Part 23 aircraft under the FAA’s NORSEE (Non-required Safety Enhancing Equipment), which is considered a minor alteration. Get an A&P or FAA repair station to sign it off with a logbook entry. That’s all good, inexpensive and capable, but the panel here is also backed up with a lot of certified gear. As we say in the music world, let’s break it down. Starting at the far left there’s an STC’d Garmin G5 electronic flight instrument and dual Garmin GI 275 TSO’d flight instruments. There is also a Garmin IFR GPS navigator, making the airplane well-equipped for IFR flying. Add the Apple stuff and there’s more belt-and-suspender backup than anyone needs. But Guardian, with its smartPlane interface, has an interesting approach to building an iPad panel network with third-party avionics equipment. I think interfaces like it (maybe with fewer iPads) will grow in popularity.

Guardian’s iPad suite originally started with the company’s $699 smartPlane EM100, which is an engine monitoring module that also works with the company’s smartLink 851 flight data recorder for displaying a lot of customizable flight data on an iPad. The way it works is the remote engine monitor connects via plain-vanilla RS-232 serial data to the smartLink device, which then connects to the iPad via a wired USB connection. The smartLink also has Bluetooth connectivity. And of course it’s app driven, with the data hosted by the Guardian smartMFD app for iOS, and when connected to the smartLink 851, the iPad receives the data and also power for charging. The smartMFD app stores and uploads the captured data after each flight to a virtual cloud. As for actually mounting the tablet on the instrument panel, Guardian makes a line of iPad panel docks, in addition to extension cables for mounting the iPad in various locations. Mounting portable devices on the panel is hardly new. It was actually AirGizmos that may be credited for pioneering panel mounts for portables, with a bunch of interfaces for Garmin portable GPS navigators, and then iPads. At the shop, I remember FAA inspectors hyperventilating about the mere thought of panel-mounting a portable (some even connected to autopilots), but they eventually accepted the standard of shops just signing the interfaces off with logbook entries, supported by the FAA Form 337 as a minor alteration.

But now there’s NORSEE, which I think will kick tablet computer interfaces to the next level as Guardian Avionics is doing with smartPanel. But for most, iPads aren’t ready for serving as primary instruments. —Larry Anglisano