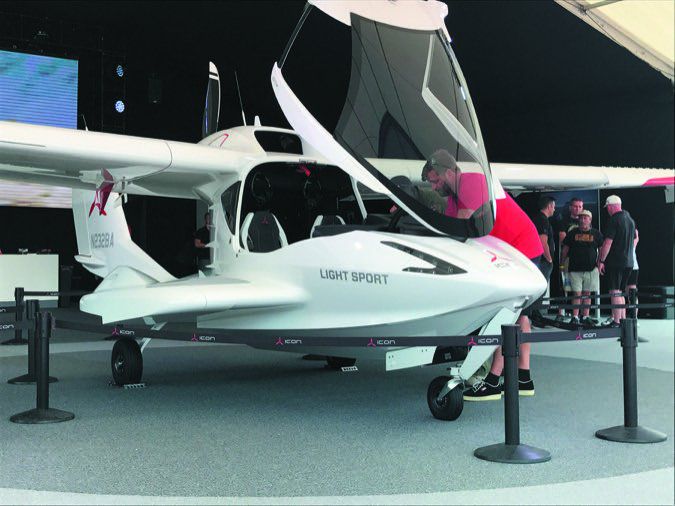 When I made my products-to-see checklist before launching for Sun ‘n Fun last month, Icon’s A5 never made it on and it should have. But in my world it was an easy chore to drop because Icon went silent. There had been no press releases in my inbox and little if any industry chatter since the high-profile fatal crash of Roy Halladay last year. So when it dawned upon me while cruising home that Icon wasn’t even at Sun ‘n Fun, I thought about all of the delivery positions that Icon was to begin filling, and also some of our readers who slapped down deposit money to get on the list for an A5. What’s going on at Icon?

To find out, I dialed up Icon’s Brian Manning, who told me something I already knew: In 2017, production numbers for the Icon didn’t come close to projections. Moving forward, Manning said the company now plans to deliver between six and ten aircraft per month and it completed six in April. For 2018, Icon plans to deliver 150 total. Since the beginning, the company has finished around 20 aircraft total.

“We now have a firm grasp on every element of production, including quality control, and we’re ramping back up,” Manning told me. Icon’s final production headquarters remain in Vacaville, California, while the carbon fiber fabrication for the fuselage is done in Mexico and then trucked to California for assembly. And when it comes to final assembly and customer delivery, Icon’s current delivery window has been reduced from years to only six months.

So what about Icon’s order book that was filled with thousands of positions to fill? Manning said a large percentage of those orders includes international buyers and Icon is still working through regulations to begin selling in some countries outside of the U.S., including Asia. “There have been position holders who for a variety of reasons—life circumstances, our price increase and other things—have pushed off their deliveries,” Manning said. The deposit to get on the delivery list is $2000 and there is no price premium to take delivery within six months. The base price of the 2018 A5 is currently $269,000 and fully loaded models are $389,000—the only configuration currently being produced for sale.

As for the Rotax-powered A5, it’s pretty much unchanged for 2018 although Icon has slightly tweaked it. It made changes to the nosegear strut so that it’s easier to taxi, the oil cooler has been reworked for better airflow and cooling and the instruments were improved for better visibility. Icon said some buyers are asking about ADS-B Out compliance given the approaching mandate and the company is exploring equipage options, but will be prepared with a solution when the mandate goes into effect.

Icon plans to put the A5 back in the spotlight at both aviation and non-aviation events, including AirVenture this July, plus increase its presence at a variety of other trade shows in the powersports and marine segment. Recall that Icon’s target market doesn’t really include existing pilots and when I asked how that focus has worked, Icon said that more than 50 percent of people who experienced the aircraft at its flight centers (California and Florida) were new to flying.

The company is doing beta testing on fractional ownership arrangements where an A5 would be managed by Icon, but made available to those not interested in sole ownership. Icon says it has secured financing partners willing to lend money for an A5 at single-digit interest rates.

Manning said the current business plan is to expand Icon’s presence around the country, which includes setting up training, service and sales centers for prospects and customers who don’t want to go to company headquarters in California. It’s also looking for regional flight instructors and sales staff to help support the increase in production.