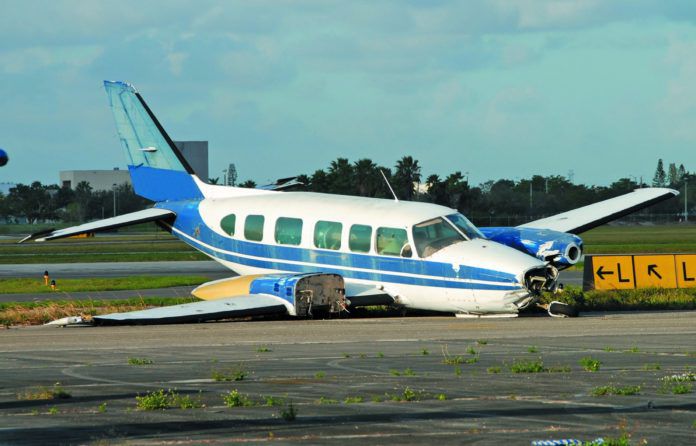 You’ve got the airplane partly configured for landing on a long final and the tower hasn’t yet cleared you to land, but says to continue at best speed. To make the airplane go faster, you retract the landing gear and clean up the flaps. Then you’re instructed to do a present-position 360 because the sequencing just isn’t working out and a Falcon is beating you to the runway. Halfway through your circle, the tower clears you to land, you tuck in on final, put in some flaps and come over the numbers kind of hot. Something definitely isn’t right in last two seconds of the flare because the tires aren’t touching. -But then the propellers do, and so does the belly. At least you’ve stopped at the first taxiway so they can get your broken piece of metal off the runway quickly so the ramp gawkers can see it hanging off the wrecker. A sickening experience, yes, and a bad ending to an otherwise good business trip with the airplane. But isn’t that what insurance is for?

As twisted as those three-blade propellers were, I somberly half-enjoy these stories on a slow day in the editorial office because well, we need field reports, and this report comes from a piston single owner who was subsequently dropped by his insurance company after that exciting day at the home airport when he geared up his airplane. When we looked at the aircraft insurance market six months ago there were signs that the 10-year run that favored buyers could be coming to an end, particularly for turbine aircraft owner-pilots. Some of those customers were being hit with premium increases of 30 percent or more. Some of the brokers I talked with are now reporting that price increases are trickling down to customers flying higher-performance single- and twin-engine aircraft. Moreover, the consensus among aviation insurance professionals is that general aviation underwriting has become generally unprofitable-a trend that actually started several years ago. Why? All of those years of rock-bottom premiums are catching up with the bottom line.

And it wasn’t just cheaper premiums for high-end aircraft. Underwriting guidelines had softened and the competitive nature of the soft market meant that some insurers would allow an owner-pilot to attend a structured refresher trainer program every other year instead of every year, as one example. Another more convenient option is letting pilots train in their own aircraft rather than going off to a simulator for the work. Even the numbers changed. As an example, some underwriters relaxed their guidelines on what limits of liability they would offer. But until recently, owners of piston aircraft have seen fewer changes in their premiums, the limits available to them and the training required to stay insured.

From what I can tell, one segment that’s getting hit the hardest when it comes to premium increases-and perhaps more likely to get dropped-is aging pilots. No fewer than four older pilots that I’ve spoken to recently (all over the age of 70) who fly their own turbine aircraft say they’ve seen substantial increases in their premiums. These are generally accident-free customers who operate everything from single-engine turboprops to light jets. Some told me the underwriter is requiring far more frequent refresher training-like every six months, compared to every year or every other year as they were accustomed. One longtime and loyal customer who flies a turboprop-converted single told me his premium wouldn’t be renewed when it expires because the company has stopped insuring that model. He’s had no wrecks, flies often and has been a loyal customer.

What might you do if you’re feeling the squeeze of a hardening market? Insurance pros all agree that flying and training more frequently make you look good on paper. Loyalty matters, too, so now is not the time to jump carriers. Insurers also look favorably upon customers who earn new ratings. Last, while it goes without saying, simply don’t break the airplane. In the good old days of a soft market you might not even see a premium increase after gearing up your twin, but in the current market you could find yourself uninsurable. Larry Anglisano