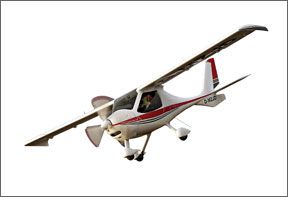 I will freely admit that I have taken cynical delight in shamelessly abusing lunchtime conversation with the tired old joke about knowing theres money in aviation because I put it there. Its mercifully fresher than the old large-to-small fortune groaner and is thus funnier because it resonates so well with anyone who owns an airplane or who has been remotely associated with anyone who has. And now

comes the latest chapter in the dumping-money-into-aviation story, the Light Sport Aircraft phenomenon.

Once again, the world of aviation is given an opportunity to sort itself into the believers and the non-believers, or at least the skeptics. True believers knew from day one that LSA would take off and flower, while the agnostics stood by-and continue to stand by-ever willing to be shown that yes, this LSA thing is real.

As Russ Niles story on page 4 of this issue reveals, LSA is real all right. More than 1000 airplanes have been sold and sales continue to be strong, something thats typical of any new market in its pre-shakeout phase. But make no mistake, the shakeout is coming and the task of the early buyer is to somehow remain on the solvent side of the line of decimation. Our crude way of doing this for now is to ask how many airplanes each company has sold and what kind of sales and support network they have in place. Or at least ask if theyve even

thought about a support network. To us, that matters far more than which engine the airplane has, whether its fabric or plastic or how much it costs.

And speaking of costs, the LSA segment still has a problem here. All tricked out, these airplanes cost $100,000 or more-some a lot more. I dont begrudge the manufacturers these numbers because I think thats what, in fact, it costs to build the airplanes. If the asking prices escalate to allow for an acceptable profit margin-always a challenge in small airplanes-so be it. But the new LSAs will be constantly competing against old Champs, Cessna 140s and 150s, Ercoupes and others costing a fraction of a hundred grand. The incremental cost/value of new versus old will be at least $70,000-a lot of money for a recreational vehicle that will be lucky to see use a few times a month.

Will they be worth it? Ill cop out on that and suggest that its an eye-of-beholder decision. There are plenty of buyers out there to whom a $100,000 airplane purchase is chump change. They dont need to over-worry the prospect of the company drying up a year or two after they take delivery on a spanking new LSA. Nonetheless, I think every buyer should put on a steely game face and ask the salesman what exactly the company is doing to fill the supply chain with parts and support from the Ukraine, Germany, Australia or some other start-up factory half a world away. If the answers dont sound convincing-or at least plausible-shop elsewhere. If I was contemplating a new LSA this year, Id wait to see what Cessnas descision to enter the market means, not because I want a Cessna LSA, but because Cessna is likely to reshape the entire segment. Even a true believer has a self-obligation to buy smart.

Have you seen those wispy one-page ads Bendix/King is running in all of the color slick magazines? No products are touted, just the phrase “the new Bendix/King is coming” tranposed over the serene blue surface of a country lake with a vague shadow resembling an airplane flying across it. Or, looking closely, is that an X or some other symbol? Maybe some sort of logo?

A friend of ours in the avionics business opines that it is indeed a logo, that of Aspen Avonics. His theory is that Bendix/King has or will be sold to Aspen, which will revitalize what has become a moribund product line. Even if thats a shot in the dark-and it probably is-any sign of life from Bendix/King is terrific news for buyers, for it brings competition to a field that badly needs it. If Bendix/King could untangle itself from the Honeywell complex, it could again focus on what it was once great at: innovative, quality avionics for small airplanes.