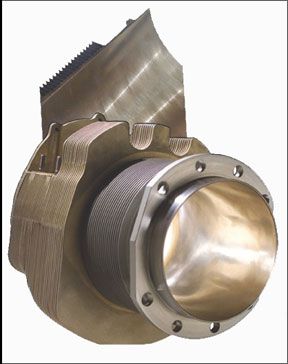 y seem utter apostasy or even a fairy tale, but there once was a time when engine cylinders and crankshafts werent considered snake-bit parts. You could reasonably expect them to make to advertised TBO and beyond. Despite the advent of gnats whisker accuracy in CNC machining and state-of-the-art metallurgy, the perception is that major engine components have devolved to being expensive bit players in a high-dollar crapshoot. Based on our e-mail and we get a

lot of it owners fret most about which cylinders to buy. And well they should, given the number of recalls, ADs, service bulletins and warranty squabbles. Common questions we hear are these: Which cylinder should I buy? Should I go with new or overhauled? Chrome, steel or nickel carbide for the barrel?

In the January 2007 issue, we addressed the issue of overhauls exhaustively, concluding that in a world of competitively priced new cylinders, overhauls still retain a toehold. Related to that is cylinder bore treatment.

In days of yore, the standard advice was that if you flew a lot, you bought steel barrels and if you flew a little, you bought channel chrome as downside protection against corrosion from underuse. Channel chrome is still available but due to environmental concerns, far fewer shops are providing it and, increasingly, many field shops have turned to nickel carbide treatments instead.

Nickel carbide has definite advantages over chrome, not the least of which is more reliable break-in. Chrome cylinders were and are notorious for glazing during break-in, causing high oil consumption that wont abate until the cylinder glaze is honed away. Nickel carbide, in contrast, appears to wear better than either chrome or steel. For about $90 to $150 a cylinder, its a modest fraction of the cost of an overhaul, even for a four-cylinder engine.

But should you consider it? Or just take your chances with steel? Here are the pros and cons.

While the automotive industry marches smartly forward with advanced engine technology, little of that progress trickles directly to light aircraft engines. Nickel carbide cylinder plating is a rare exception. Nickel carbide plating was developed by the German firm Mahle in 1967 as a means of reducing rotor-to-housing wear in rotary engines.

Marketed under the trade name Nikasil, it first appeared in piston-engine production cars from Porsche in 1973. By the 1990s, BMW, Honda and other carmakers were using Nikasil treatment, which wore well enough to allow elimination of cast iron liners in aluminum blocks, a big production plus.

Nickel carbide plating is done via conventional electrolytic plating that yields a dense, hard deposition and a surface thats relatively ductile, has excellent hardness and corrosion resistance. It also lubricates well because the surface matrix is oleophilic, providing points where oil can collect.

As with any new processes, however, Nikasil wasnt wart free. It proved unpredictably vulnerable to fuel with high sulfur content, which breaks up the plating and causes catastrophic loss of compression. This wasnt an issue in Europe, but came to light only in the U.S. and other countries where high-sulfur fuel is common.

For aviation markets, beginning in 1994, ECI adapted Mahles and others base work to plate steel cylinder barrels and trademarked the process as CermiNil. It was ECIs second foray into cylinder plating, following the demise of another process called CermiCrome, which the company also pioneered. CermiCrome impregnated ceramic material into the bore surface to improve wear and break-in performance, but owners experienced premature bore wear, which ECIs Ed Salmeron says was traced to hardness specs in piston rings that had been changed without ECIs knowledge. The harder rings simply wore away the plated surfaces faster than had been anticipated. As these problems surfaced in the early 1990s, CermiNil was under development and the company decided to drop CermiCrome.

Some 15 years and 100,000 cylinders into the program, ECI has evolved the process to what it calls Nickle+Carbide, which is applied as an option to new cylinders in its Titan line. The trade name CermiNil is still used but ECI applies it only to its overhauled cylinder line, as we reported in the January issue. Both processes are identical, however.

In the Titan line, Nickle+Carbide carries a $121 per cylinder optional premium over plain steel. In the overhauled Freedom line, the upsell price is $88. For the Titans, ECI offers a five-year warranty on the barrel surface, although not on the entire cylinder itself.

Although ECI pioneered nickel carbide in the aviation market, its no longer alone in the field. In 2000, Aircraft Cylinders of America in Tulsa, Oklahoma, began offering its own version of nickel carbide called Nikarama. Its custom work on most popular cylinders except small displacement O-200 and O-300 variants. The price is $159 per cylinder, with typical turnaround of 14 days. Theres no specific warranty but the shop says it will stand behind the work and make right any problems.

To gain a sense of nickel carbide performance in the field, we surveyed about two dozen owners through our online news service, www.avweb.com. We also talked to

engine shops selling the process to hear what customers had to say about it. Generally, we would characterize these reports as positive, with most buyers of nickel carbide-treated cylinders saying they would buy them again.

“There no question whatsoever about nickel carbide,” says Bill Middlebrook, of Penn Yan Aero, in Penn Yan, New York. “The stuff is basically bulletproof. They dont rust and they dont wear out and we have experienced no break-in issues.” Like many shops, Penn Yan stopped offering channel chrome some years ago and now sells nickel carbide as an option on new and overhauled cylinders, according to customer preference.

Almost from the moment nickel carbide appeared, RAM Aircraft, a well-respected overhaul and mod shop in Waco, Texas, has been sending new Continental cylinders to ECI for nickel plating. RAMs CEO, Chuck Butler, told us the results of been uniformly positive with zero complaints. Significantly, when many owners of freshly overhauled Continental engines with factory cylinders were complaining of premature wear and compression loss at under 500 hours total time, Butler told us RAM had absolutely no reported issues with premature wear. What we dont know and may never know is if Continental factory cylinder complaints were due to bore issues or valve guides and seats, or both. Based on RAMs reports, we could reasonably deduce that bore issues were the main problems with TCM cylinders, but the data is too sketchy to draw that conclusion.

As for individual owners, customer satisfaction with nickel carbide is somewhat mixed or more accurately, satisfaction with ECI is mixed. Our survey turned up an undercurrent of bile directed at ECI for a recent AD and service bulletin regarding new cylinders.

“If it werent for the blasted AD (2006-12-07), I would be very satisfied with these cylinders. But since I have to replace my perfectly good cylinders before 800 hours, Im very dissatisfied. Im not sure whether Im more pissed with ECI or the FAA, but a brand-new set of jugs should last longer than 800 hours,” said Greg Bloch, who bought into a Comanche with CermiNil cylinders on the airplanes Lycoming IO-540-C1B5. Interestingly, like other respondents to our survey, Blochs beef is not with the nickel carbide treatment, but with the rest of the cylinder, which must be replaced due to cracking.

Of the 24 owners who responded to our survey questions, 14 said they were satisfied or very satisfied with ECIs nickel carbide process and would buy it again. Five said they werent happy and wouldnt buy nickel carbide cylinders again, for various reasons, but it appeared to us few of these beefs had anything to do with the plating process itself.

A comment from Cessna 414 owner Eddie Zcheling was typical of the pro-nickel crowd. “I bought the cylinders in 2001 and have just over 1100 hours on 12 of then. There have been no corrosion issues and compressions have always been in the 70s. Prior to this, I had new TCM steel cylinders and they wore out at 630 hours. So far, I am very satisfied.”

As is occasionally the case, customer experiences with a product or service can vary so widely that we sometimes wonder if were talking about the same thing. But sorting through the fine grains, we think the beefs about ECIs nickel carbide are really beefs about premature cylinder cracking or unhappiness with ECIs response, not the plating process itself. The fact that shops seem to have all but universally positive experience with nickel carbide leads us to take customer complaints with a degree of skepticism. (Thats not to say were blas about ECI cylinders cracking, just that these issues dont appear to be related.)

Advanced metal coatings have been used in the auto and motorcycle industries for years, generally to good effect. Nickel carbide plating although no longer advanced by the standard used to measure the rapid-pace automotive progress strikes us as a good bet.

We think it makes sense to use it in an engine where an owner might once have picked channel chrome for cylinders and thats basically in an engine that isnt flown much and is thus susceptible to bore corrosion which, if severe enough, can trash an engine in short order. It appears to us that nickel carbide will prevent that. Were aware of no reports in which a nickel-plated cylinder rusted or pitted. We received only one report of break-in difficulties with nickel-plated jugs.

One thing that many owners probably dont consider but should is RAMs idea of sending factory new cylinders for nickel carbide treatment. This would typically add about five percent to the total cost of an overhaul chump change when you consider the benefits in both wear reduction and corrosion protection. Moreover, ECI sells a rejuvenation kit that reportedly returns the bores to like-new condition when overhaul is due. The cylinders may have other issues, but nickel carbide plating appears to be capable of taking bore wear and corrosion out of the equation.

As for ECIs Titan cylinders, in our view, the jury is out on this. In our last customer satisfaction survey of cylinder quality, ECI led the pack in perceived quality, price/value and customer service. But thats before the current cracking issues came to light, especially the 50-hour compression check service recommendation that owners are likely to find onerous.

ECI believes it has corrected the Titan lines problems, but it will take some time to see if that pans out. Meanwhile, well be listening to customer reports.