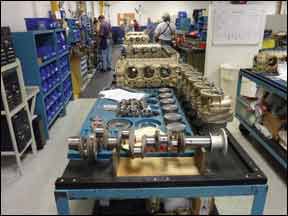 With the two engine factories fighting field overhaul shops for a piece of an ever-shrinking engine pie, it’s no surprise that the factories are pushing their rebuilt and overhauled engines.

They find enough buyers for these services such that rebuild work now constitutes a significant revenue stream for both Lycoming and Continental. Anyone shopping for an overhaul usually gives the factory options at least a cursory look.

So how are they doing? To find out, we asked our readers to tell us about their experiences with both Lycoming and Continental factory engines of various kinds. We heard from 345 readers, almost uniformly divided between Continental and Lycoming, an outcome which closely reflects the marketshare of each manufacturer.

Via our sister publication, www.avweb.com, we asked customers of each company for their overall experiences and impressions in buying factory new, rebuilt or overhauled engines. Cutting to the chase here, customers are generally satisfied with their factory engines, although we heard enough complaints to call the results mixed. We didn’t see any hate mail, nor did we receive any paens to the industrial magic at Williamsport and Mobile.

One caveat worth stating is that surveys like this tend to attract the polar extremes, with the rabid fans mixed in with customers who aren’t quite as happy. The overwhelming majority of complaints had to do with warranty issues that weren’t resolved to the buyer’s satisfaction.

Price Shopping
Our survey turned out to be strongly biased toward owners who fly a lot, which these days, is more than 100 hours a year. Some are commercial operators or owners who use their aircraft for business. The majority bought factory rebuilt engines, which both companies offer. One in five bought new engines at a considerable price premium over rebuilt engines. (See the sidebar on page 11 for an explanation of the difference between rebuilt and overhauled engines.)

The largest percentage of owners—64 percent—told us they bought the factory engine because of a combination of warranty, reputation and quality and percentage of new parts. But in our estimation, the new parts content was the strongest single driver. Scheduling was important, too.

“Since I fly 500 hours a year, I need my plane out of service as little as possible. A factory reman delivered to the shop ahead of change out works well in terms of limited time out of service,” said Lewis Young, the owner of a Piper Seneca for which he bought Continenal IO-360 engines.

Worth noting here is that most engine purchases aren’t transacted with the factory directly but through dealers and distributors, such as Air Power or engine shops that are also authorized dealers.

Although we’re not entirely sure we agree, some owners believe a factory engine adds measurably to aircraft value. “I am an aircraft dealer and stock 15 to 20 airplanes a year. Many are candidates for engine overhaul. I generally find the newer planes will yield a better return on margins if a factory engine (reman or straight overhaul) is used. Planes less complex and older are equipped with engines overhauled by Triad engines in Burlington, North Carolina, who have offered excellent, reliable, on time service,” said Bob Sutherlin of AirMart Aircraft Holdings.

The chart at right summarizes owners sentiments on various questions we asked. The factories and dealers seem to keep up with delivery expectations. In other words, an ordered engine showed up when it was supposed to, which owners deem important. But things can spin out of control.

“My response to the shipping question was ‘late but OK’ was not due to Lycoming, but to Yellow Freight, who lost track of the box and then found it after a two-day delay someplace in the upper Midwest,” said Cessna owner Linda Chism. The factories seem to maintain enough inventory of popular engines to ship on short notice.

Reliability, Performance
We also asked owners about their impressions of durability and performance of the engines they bought. Here, the two companies ran neck-and-neck, with almost identical excellent to satisfactory percentages, but also a significant percentage—20 percent—who were not happy with their engines for various reasons. Most were pleased.

“Best engine I have ever flown behind. I have had over 25 overhauls in various airplanes. This was the best,” one reader of a Cessna 180 with a Continental rebuilt O-470 told us. Although we can’t confirm the pattern, high-use owners seem to tilt more in favor of factory engines.  “We have a fleet of seven PA-31 Chieftains that put in over 14,500 hours of flight time per year at 80 percent power settings. In my seven years of flying for this company, we have not had a single major engine problem. Lycoming is the best,” wrote one respondent.

And some owners went with factory engines even though they had doubts about doing so. “I have read horror stories regarding TCM. I have no idea as to the truth of the matter. All I can say is that the factory built mine right. It has been smooth in operation with very few, minor squawks, has taken me past TBO and continues to motor on,” said John Voninski, owner of an O-470-powered Cessna 182.

“The rotating mass didn’t have any trouble, it was the carb and the mags that gave out in less than 100 hours,” said one owner of a Cessna 172.  “The mag was a simple pull and exchange, but the carb was a nightmare. The factory spent 20-plus hours with our shop between the adjustments and pulling and shipping back, then getting it back with the same problems. Finally, our mechanic got them to send a different carb. Worked great. Just lost a month of flying.”

“My Lyc factory new IO-360 was shipped with a faulty alternator that had intermittent failures in the first 10 or 20 hours of operation. A new alternator was provided under warranty with an couple hours of labor credit for my A&P to make the change,” said George Schandel. Eight hundred hours later, he got caught in one  of Lycoming’s crankshaft ADs.

Our impression from reader mail is that complaints about premature failure of Continental cylinders had abated. Yet our survey still revealed some problems. “Engine was great at installation. Very smooth, perfect in fact. Now, with only 700 hours, getting some problems with low compression. Pulled one cylinder and could not re-install it as it had a ring-step and the cylinder shop red-tagged it. I went 2000 hours on my last engine, which was a factory reman. I am hearing and believing that the cylinders just are not as well made as they used to be,” said Brian Conway, owner of  V35 Bonanza.owner.

Warranty Bugaboos
If there’s any area where the factories consistently raise the ire of their customers, it’s in warranty, both the warranty itself and its administration. We could fill a page with complaints.

“Warranty is worthless unless you fly a lot of hours every year, as in a commercial operation,” said a Cessna 185 owner with a Continental engine. “Cylinders all needed repair well before mid-time. Discouraging. Talking with factory reps, they just focused on how I operated the engine. I have a six-probe probe EGT and CHT and I’ve been flying 35-plus years and know how to run the engine. I have heard that Continental has improved their cylinders in recent years, but have not seen data, only anecdotal references.”

Added William G. Miller: “I really fretted about using Continental when I had to have my engine overhauled, but I had to comply with the AD on the crankshaft. TCM provided the shaft at no charge. I talked to TCM and they swore that all the problems with their cylinders were in the past. So I paid my $25,000. Two hundred hours later, the first two cylinders had compressions of 25 PSI. Leaking through the exhaust valve. Continental just said it was my fault. I didn’t fly the engine properly.”

Many warranty complaints relate to the factories or dealers just saying no on the simplest requests, or appearing to drag their feet on resolving customer complaints. “The customer service folks at the factory have the tools to help the customer, but in my experience, they did not use the tools,” said the owner of a Lycoming-powered Mooney.

“Went with factory reman only to get roller tappets. Engine had oil leaks and oil temperature problems from day one. Four vernatherm valves later, the oil temp problem was resolved. Lycoming sent a factory tech to replace my defective accessory case to fix the oil leaks. I wanted a replacement engine based on a lemon law ruling, but they would not do that. Engine still leaks oil and has stuck an exhaust valve twice in 900 hours,” said Monte King, a Cessna 177RG owner.

On the other hand, it’s not all doom and gloom on the warranty front. “I had a really great experience with Lycoming and would never purchase anything but a factory new or reman in the future,” said owner Claude von Plato. “The west coast technical representative, Brian Costello, is a first class act with a wealth of knowledge. I’m happy that Lycoming values employees such as he.”

What To Do
Despite what we could call warranty administration that could clearly be improved, we wouldn’t recommend against factory overhauls on that basis alone. We heard enough positive reports to say that factory engines offer value for the investment.

They’re an excellent choice for high-use operators who need an exchange engine and can’t afford the downtime waiting for an overhaul. In Lycoming’s case, one added benefit is the option of roller rockers in the new engine and a 24-month warranty that, for some operators, could cover the engine to TBO. The larger percentage of new parts content in factory engines is also a net plus, in our view. You’ll pay more for this, but new cylinders—especially Lycoming cylinders, about which we heard not a single complaint—seem more likely to deliver trouble-free service.

On the other hand, the best engine shops provide support and often meet customers halfway on problems that crop up past the formal warranty, something less likely to happen with factory warranty service.

One solution is to do what one Cirrus SR20 owner did. Work with an engine engine shop that’s also a factory distributor.

“I had problem after problem with quality issues and Continental was no help. Thank God for Penn Yan Aero! As a factory distributor, they were able to make things right for me. But not without a serious amount of work, for which I’m sure they received little compensation. When this engine is timed out, Penn Yan will overhaul it.”