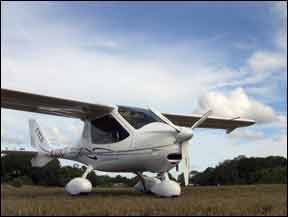 If avionics move forward at the speed of light—well, sound anyway—aircraft engine progress is rather more glacial, but it is progressing as we reported last spring with Rotax’s rollout of the new 912 iS. Although a few months late, the new engine is finally delivering in volume and we flew one in a Flight Design CTLSi, a new version from the leader in LSA sales.

To speed the uptake, Rotax intended the 912 iS to be a bolt-up option for manufacturers and it basically is that, although some minor airframe mod requirements mean it’s not exactly an afternoon swap-out project.

Just as Rotax predicted, the engine delivers better fuel economy over the 912 ULS used in many LSAs and its operation is somewhat simplified. (Not that the ULS exactly required a flight engineer.) But you’ll pay for the privilege of knocking the fuel burn down by a half a gallon. The asking price of the CTLSi is nearly $13,000 higher than the standard model with the 912 ULS Rotax. Presumably, there will be some payback in lower maintenance costs, but that’ll be for the future to prove.

Background
As we reported in the May 2012 issue of Aviation Consumer, the 912 iS ups Rotax’s game considerably, although it’s hardly what we would call a radical leap forward. It does directly address one major complaint Rotax owners have voiced: repetitive carburetor maintenance.

The 921 iS doesn’t have that problem because it doesn’t have carburetors. In place of the two altitude-compensating Bing carbs the older engines had, the 912 iS sports electronic fuel injection. It’s port type rather than direct injection, but we’re happy to take what we can get to lose the Bings.

Direct injection might have tweaked a bit more economy out of the engine, but when we visited the company’s Gunkirchen, Austria, plant last spring for the rollout, we were told that the 912’s combustion chambers and cylinders would have required redesign to accommodate direct injection and the company decided the juice wasn’t worth the squeezing. We would surmise they’ll be proven right.

The cylinders themselves have improved cooling flow and the crankcase has also been modified to improve oil flow and scavenging. Overall principal dimensions and piston/crank geometry remain the same.

At a glance, the 912 iS looks like a modern automotive engine, as well it should since the fuel injection and ignition is set up like a modern car. It even uses automotive spark plugs. A large plastic induction box dominates the top of the engine, with induction tubes running out to each cylinder.

The airbox is sensor rich, with MAP and temperature probes and EGT sensors for each cylinder. Interestingly, the engine can also be equipped with automotive-type acoustic knock sensors. They aren’t currently programmed into the ECU architecture but may be in the future. The 912 iS can operate on 100LL or automotive fuel containing up to 10 percent ethanol. (Flight Design also approves use of E10; some manufacturers do not.)

The 912 iS is, not too surprisingly, considerably more electrified than is the 912 ULS, which presents challenges for the companies installing it. Critical to the set-up are a pair of high-pressure fuel pumps (43 PSI) to charge the fuel injection system. The pumps are small and contained in a single metal housing. Manufacturers are left to their devices on where to put the pumps, and Flight Design put them in the baggage compartment, along with a small fuel header tank.

The 912 iS has a dual permanent-magnet alternator setup that provides power to operate the engine without ship’s voltage. The PMA’s magnets are on the rotating flywheel and the coils are fixed, bathed in oil for cooling. Either alternator can run the engine, but they aren’t of the same capacity. Alternator A is 16 amps and normally runs the pumps and ECU, with an amp to spare. Alternator B has 30 amps of capacity and comes online automatically when the engine reaches 3000 RPM. Load management is handled by a Rotax-supplied fusebox or load center. This box also supplies DC output for ship’s electrics and battery charging. Rotax provides provisions for a third, external alternator for additional backup and capacity, which Flight Design will offer as an option.

CTLSi
Flight Design considers the CTLSi simply an extended variant of the CTLS, not a new model. Although it’s close to a bolt-up, there are some minor changes to the airframe. The aforementioned fuel pumps are in a floorboard enclosure in the baggage compartment, where the fuel header tank—a hard, translucent plastic design—also lives.

The CTLS fuel system has two tanks totaling 34 gallons with a single on-off valve on the center console. The CTLSi keeps the two tanks, but the fuel line is routed through a left/right/off valve from the tanks to the header and the two pumps. The pumps deliver pressurized fuel to the injection system. The system requires a return line to the header tank and header venting through the main tanks. This design strategy continues something we’re seeing more of in LSAs: fuel introduced inside the cabin of the airplane. However, in the CTLSi, there’s a hard bulkhead between the baggage compartment and the occupant compartment, so this mitigates the risk. Still, in our view, fuel kept outside of the fuselage is a better design strategy.

The 912 iS adds a bit of weight to the basic airplane—about 12 pounds. This is due to additional hardware such as the pumps, the header tank and the fusebox/load center. Empty weight of the CTLSi we flew was 841 pounds. That leaves 479 pounds of useful load or, with full fuel, 275 pounds; basically a one-person airplane with generous baggage. (Allowable weight in each rear compartment is 55 pounds.)

Flight Design’s Tom Peghiny told us that the installation of pumps and header tank moves the CG aft, but doesn’t reduce loading flexibility. “If anything, I thought it makes the airplane a little easier to land, with the more rearward CG,” he said. We didn’t have both variants available for trial, so we can’t confirm that observation.

Rotax said that flying the 912 iS should be transparent to the pilot and it is that. In fact, it’s a little easier because the choke is no longer required. Start-up is car like, as Rotax intended, whether hot or cold. No engine pre-heat is required in cold weather nor priming in hot weather.

Rotax engines are peculiar for requiring a specific warm-up period and so does the iS version. The engine is supposed to slow idle until the oil temperature reaches 120 degrees F, at which point the throttle can advance to 3000 RPM and the second alternator, which remains dormant until that point, comes on line and begins charging the ship’s battery. Otherwise, the engine runs on the smaller PMA and the airplane systems draw on the battery.

While we’re on the subject of the battery, the CTLSi has a lightweight and small lithium-ion cell that occupies a mounting box on the lower firewall on the right side of the aircraft. It’s a German-made product made by Super-B. Although it’s a huge weight saver, as we reported in the August 2012 Aviation Consumer, we’re not entirely convinced lithium-ion is ready for mainstreaming in aircraft due to fire concerns. However, Super-B assures us, they’ve had no fires or explosions and the battery is equipped with cell-balancing charging protection circuitry.

The CTLSi’s ignition switch is what looks like a standard four position key switch, but closer examination reveals that rather than the traditional right and left mag labels, it has “Lane A” and “Lane B.” This reflects Rotax’s two-channel design architecture for the 912 iS’s ECU. Rotax had the ECU’s maker, Rockwell Collins, set Lane A as the default with Lane B running in parallel hot standby. Either channel will operate all of the cylinders.

On startup, the system flashes lane-labeled lamps on the right instrument panel, which signals passing self diagnosis and fault detection. If the lights go out, the ECU is happy with itself.

Theoretically, no run up is required, although the POH calls for one anyway, which we found puzzling. So did our demo pilot, Brian Boucher and Flight Design’s Peghiny. Both surmised that this step may be eliminated in future checklists.

Takeoff and flight are unremarkable. The engine has the same 100 HP as the ULS version, so it’s no surprise that its climb and cruise performance are similar—with one exception. The fuel burn is lower, although we can’t say how much lower it is without a side-by-side comparison with a 914 ULS CTLS. The CTLS POH is a bit sketchy on fuel consumption vs. speed comparisons, but Boucher told us the ULS version cruises at about 115 knots on a little over 5 GPH. Other LSAs in this class typically burn between 5 and 5.5 GPH in cruise.

On our trial flight, we trimmed the airplane up at 4000 feet and saw 115 knots on 4.5 GPH, which concurs with Boucher’s observation that it was burning about a half-gallon less than the 912 ULS for equivalent speed. Rotax said when it introduced the engine that it might have 20 percent better fuel economy. Well, it might, but we can’t swear to it yet. When we fly it head to head against a ULS engine, we’ll have better data. For now, we’re comfortable saying it’s more economical­­—we’re just not sure how much.

Conclusion
The sales pitch for the 912 iS for all of the LSA makers who will offer it—and we suspect that’s going to be all of them that now have Rotax engines—is likely to be a combination of slightly better economy, better flyability and lower maintenance. And this may be a good thing, because its payback on fuel savings for an owner flying 100 hours a year will be slow in coming, unless an owner is willing to use mogas, which Peghiny says the company will begin to promote.

Flight Design’s base price on the 912 iS version of the airplane is $152,500 versus $139,800 for a comparably equipped 912 ULS CTLS. (Both will remain available for now.) That’s a $12,700 price premium or about 9 percent. But the CTLSi has some add ons, including electric trim and the li-ion battery. At those prices, both versions get a BRS parachute system, which we think is a good idea in an LSA. Also, Flight Design is discounting early purchases by $8000, making the price difference only about $4000.

For now, we think the claim of better fuel economy is conditionally evident in the 912 iS, but we need better data to say if it’s meaningful, plus some experience with other model aircraft. The real payoff is likely to be reduced maintenance intervals, easier starting and smoother running; no more out-of-sync carburetors. On that count alone, CTLSi owners might come out ahead.