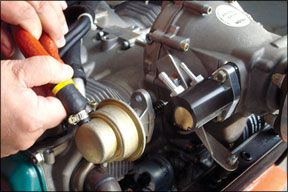 With more and more Rotax engines out in the field, it makes sense that there is a growing market of aftermarket parts and accessories. However, this is purely good news for owners of Rotax engines on experimental aircraft, including E-LSAs.

For owners of S-LSAs-factory complete LSAs not registered as experimental-the usefulness of these parts depends on what it is and which aircraft they own. S-LSAs dont use the STC process many aircraft owners know and love (or not). Instead, almost any modification can be made with a letter of authorization (LOA) from the aircraft manufacturer. These LOAs are supposed to be issued on an aircraft-by-aircraft basis. So, just because your hangar neighbor with the same LSA has an LOA for a particular change, that doesnt give you the right to do it. That said, the more organized LSA manufacturers keep common LOAs ready to go for customers who request them.

The take home from this is that a minor or common change, such as adding a pre-heat system, is likely to be approved. Getting approval to install a turbocharger that boosts engine output by over 40 percent … not so likely. The LOA must come

from the airframe manufacturer, not Rotax.

While its arguable that a Rotax isnt as susceptible to cold-start damage, pre-heating is still a good idea for both ease of start and reaching the required oil temperature before flight. In fact, weve heard that some flight schools are leaving their Tanis heating systems for Rotax plugged in all the time just to avoid burning Hobbs time in the runup area waiting for the oil to get up to minimum takeoff temperature.

The Tanis system weighs in at less than a pound, draws two amps and targets both the cylinders and oil sump. We spoke with Jamie Shimer, who installed the system on AOPAs sweepstakes Remos. He reports a kit complete with all parts, including proper-length harnesses, tiewraps and silicone sealer. Some LSAs have less than ideal access inside the cowl, so positioning the 110-volt plug may be a concern. Shimer

says Tanis was also helpful in getting the LOA from Remos.

The Tanis system can be put on 912 or 914 engines and runs $649 from Tanis or distributors such as Lockwood Aviation in the U.S. or Bully Hawk Aero Performance in Canada.

Oil heat is an issue in the air as well, and northern operators must put foil tape over part of their oil coolers during the cold season. As an alternative to this, an oil thermostat can bypass the oil cooler when the oil is cold. This also helps cut down the ground heat-up time.

Reports on the effectiveness of these devices are mixed. With some installs not seeing the temperatures still colder than they were hoping for. Some manufacturers, such as Tecnam Aircraft, wont approve the installation due to concerns about

This seems to have been largely resolved, but consensus is even the current pump isnt as robust as it could be.

During the dark days, Michael Coffey was searching for a better fuel pump and hit upon one designed for race cars that could be modifed to mate up with the Rotax 912. The result is the Billet fuel pump.

This is a piston-style pump with few wear parts and a potential output pressure of 170 PSI. The kit includes a regulator to drop the pressure to where needed for normally-aspirated 912 or turbo-charged 914 engines. As a side benefit to 914 owners, this pump can replace one of the two electric fuel pumps needed on those aircraft.

The Billet pump system is $368 for the 912 and $396 for the 914. Thats about twice what a factory pump from Rotax will cost, but its unlikely to ever fail. Billet stopped its failure testing after the pump was still performing well at 2500 hours. They will also refurbish any customers pump for $60 for the

life of the pump. The pump is distributed through CorbiAir.

Most Rotax installations use the 18-amp AC generator built into the Rotax 912/914. This is adequate for most LSA use, but can max out when several digital displays are installed-especially at low RPM.

The engine can easily spin a belt-driven alternator and this is an option from several manufacturers. Bully Hawk of Canada offers a belt-driven, internally-regulated, 40-amp alternator for those who dont have one installed.

The kit is complete with all mounting hardware and weighs 8.5 pounds. It has a 50-hour, six-month warranty. The standard price is $1035, but, as of this writing, it was marked down to $699.

Bully Hawk also offers the Soft Start Module that retards one of the two ignition systems for the Rotax during start up. The high-compression 912 and 914 engines have a bad habit of kickback if the cranking speed is too slow (due to a weak battery or long starting cables). The unit plugs into the existing wiring and is tiewrapped on top of existing engine modules. It sells for $1035.

Bully Hawk sells several other products, including a kit to turbocharge existing 912s and several tools for Rotax maintenance. They are distributed in the U.S. through Lockwood Aviation.