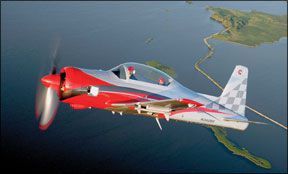 If money were no object and you could afford a hangar full of airplanes, would one of them be a warbird, say a P-51 or an F4U Corsair? Probably. Just as likely, the airplane would sit in the hangar, kept airworthy by an expert mechanic, but rarely exercised. Why is that? Its one of the natural laws of vintage aircraft ownership and also one of the reasons the airplane pictured above-the Bear 360-was designed and built.

The Bear is, as far as were able to determine, a unique animal indeed: a newly manufactured military-feel aircraft built by a foreign industrial power, formerly a Cold War enemy. Eastern bloc imports like the L-39 and the Yak trainers have

similar antecedents, but they arent new and they arent purpose-built to be high-performance fly-for-fun airplanes, which the Bear is. We stumbled upon this airplane at EAA AirVenture this year vaguely thinking we had seen it before (we had), but now the company thats marketing the airplane is taking orders for U.S. deliveries. Interestingly, as new airplanes go, its not especially expensive and as warbirds go, its a mere pittance.

At a distance, the Bear looks not unlike its namesake, the Grumman Bearcat, a late World War II Navy fighter thats a relative rarity on the warbird circuit, compared to the P-51, at least. The design springs from famed air racer and combat pilot Skip Holm, who paired with Russian designer Sergey Yakovlev to build a modern, robust military-like aircraft, but with operational costs that dont envision 60 GPH fuel burns and $100,000 engine overhauls.

Holm told us that theres a market among warbird owners or would-be owners who can afford to own vintage aircraft but dont fly them much, not so much because of the cost, but a combination of that and the considerable effort required to remain current enough in a World War II fighter to stay alive.

The project owes its roots to the thawing of the Cold War in the early 1990s, after which Holm found himself in the former Soviet Union doing aviation-related business. (He didnt tell us exactly what that was.) During that period, he met Russian designer Sergey Yakovlev, whose established design bureau developed numerous eastern bloc aircraft and which continues to be a major player in Russian aerospace.

On a lark, Holm invited Yakovlev to the Reno Air Races sometime during the 1990s

and during a pit tour, the two cooked up the idea of building a fighter look-alike aircraft, but one that would be affordable to operate without requiring edge-of-the-seat piloting skills. Were not sure if Lyle Sheltons Rare Bear was the direct inspiration, but the resemblance is unmistakable. (At the time, Holm was flying Dago Red, another well-known Reno racer.)

Holm entered into an agreement with Yakovlev to design the airplane and provide a prototype for marketing purposes and, in parallel, he took on a U.S. partner to build a sales organization. The airplane actually appeared in the U.S. some eight years ago, revealed at a low-key showing at Sun n Fun, but it then receded from view, at least partly because Holms marketing partner died, tangling up the ownership rights in a knot only recently sorted out.

At Oshkosh, Holm told us that the newly formed Bear Aircraft now owns the rights and has contracted with the Progress factory, a major Russian manufacturer, to build the airplane on a contract basis. Stuart Featherstone, Bears marketing and sales director, says that Bear owns the design and the production jigs and fixtures, but will have the aircraft built to order one at a time or in lots. The airplanes will be assembled and ground tested-but not flown-then disassembled for container shipment and completion in the U.S. or other countries.

Ostensibly, the Bear is aimed at buyers who want a warbird and who can afford one, but who want something more practical to fly. Given its price-not all that high, in our view-it could very well expand that market by a generous handful or two. We suspect there are moneyed buyers who wouldnt consider a Mustang but who might give the Bear a second look. The Bear will be sold in two versions-the Warbird Edition and the ARF, or almost-ready-to-fly version. The Warbird is priced at $285,000 and includes a Garmin GNS430, Dynon 180 EFIS with AF74 autopilot, a GTX327 transponder and an engine monitor. At $185,000, the ARF is delivered minus engine, prop, avionics, interior or paint.

But dont think of it as a fast-build kit, because the Bear is delivered under FAR 21.191 experimental-exhibition category, meaning that you cant use it exactly as you would an experimental aircraft that you built or bought. Experimental-exhibition allows flight within a 300-mile proficiency area, display and flight to airshows, air racing and photo and movie shoots. In other words, reasonable recreational/sport flying is allowed; flight for transportation-other than airshows-is not. Anywhere a Mustang or an L-39 can go, so too can a Bear.

On paper at least, a Bear should be more readily maintainable than even the most modest warbird. Although its an uncertified aircraft, Featherstone and Holm told us the Bear is built to FAR 23 standards. Thats not to say it flies and behaves like a Cirrus or a Mooney, but its no LSA, either.

Its made with conventional semi-monocoque construction with a single-piece tapered main spar and flush riveted skins over conventional ribs. The prototype we flew-and the Oshkosh showplane-has excellent build quality. Presumably, this would be duplicated in series production, although Bear will be low-volume-on the order of 300 aircraft total, depending on how the market develops.

The engine is a Vedeneyev M14P nine-cylinder radial, of which the Russians and eastern bloc countries made hundreds of thousands. Its found in the Yak trainer series and the Sukhoi SU-26, among others. Although not an everyday sight in North America, there are believed to be about 800 M14 variants flying in the U.S. In the Bear, the M14P is pressure carbureted (optional fuel injection) and

supercharged for 360 HP. The complete engine is not currently in production, but enough are flying to make parts availability realistic, if not as easy as calling Aviall.

Systems wise, the original design incorporated a Russian favorite: pneumatically operated gear and starter, with a hefty air pump on an accessory pad providing high pressure air. Western pilots arent fond of pneumatics, so the Bear will have electro-hydraulic retractable gear, electric flaps and a conventional electric starter with 35-amp engine-driven alternator. The control circuitry is push-pull torque tubes with a steerable tailwheel that also retracts and castors through 360 degrees for easy ground handling.

At a distance, its not obvious that the Bear is smaller than a Mustang or a Bearcat, but it becomes more evident up close. The Bear is 23 feet long with an equivalent wingspan, giving it a short, squat look on the ground. (A real Bearcat is 28 feet long, with a 35-foot wingspan.) The Bear has a nicely shaped bubble canopy that we suspect a real Bearcat pilot would have killed for. The cockpit is situated high and forward enough to give good visibility over the nose from the front seat; mild S-turns might be needed, but not aggressive taxiway weaves. For a nice combat aircraft touch, the canopy has a crank mechanism to close it.

For as intriguing as the Bear is, we were just as interested in this question: How do these guys plan to make a business out of selling it and does it look like it can be a business? We would put it in the same realm as any new kit or experimental offering with one significant difference: It may attract a much narrower but more moneyed niche of buyers. While this is hardly everyones accessible kit airplane, neither is it a $2 million rivet-perfect World War II restoration too precious to fly. Its exactly between the two, which is what Holm says he has in mind.

Projects such as this tend to attract investors whose expectations may be unrealistic, thus they expect higher sales and greater returns that are remotely realistic. Judging from what Holm and Featherstone told us, thats not the case here. Holm himself is the principle investor, with Featherstone as a minority partner.

Given that the production run is seen as limited-about 300 over the long term-and that the airplanes will be produced on a one-off, contract basis, this doesnt appear to be the kind of business model that will forever be waiting to turn the corner on profitability. Its success may revolve on how reliable the companys Russian partners turn out to be. Holm is placing himself on the dime for long-term support, which we see as more promising than a new start-up composed of unknown investors.