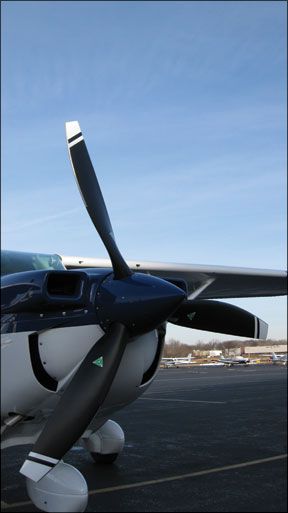 Think of it: If you had an aircraft engine that burned two to three gallons less than the competition, delivered the same horsepower, weighed more or less the same and burned fuel that isnt threatened with extinction, as 100LL is, wouldnt you sell the hell out of it? Youd think so.

But while SMA, the French daughter of aerospace giant SAFRAN, has such an engine in the SR305 aerodiesel, buying

one is at best a rarified experience. There arent many of these engines flying, so judging their merits has been largely a paper exercise.

So when the Paramus Flying Club, a long established New Jersey co-operative, invited us to examine their SMA-converted Cessna 182, we realized it represented a rare opportunity to take the measure of this engine in the wild.

The club has been operating it for nearly a year and while its too soon to declare it a walk-away success, the airplane has proven to be the most popular among the clubs 46 members, its dispatch reliability has been excellent and the engines initial operating costs look promising.

So why arent there more of these things flying in the U.S.? Its a fair question and one thats not simple to answer. In this report, well examine Paramuss experience and you can make your own assessment.

While the glamour boy of aerodiesels, the Thielert Centurion line, was making a giant splash that soon led to self-immolation, SMA has had the SR305 on a slow simmer for years. The engine first flew in 1998 and it appeared that year at the Paris Air Show, well ahead of Thielerts Centurion coming out of the ground.

Although fully certified by 2002, the SR305 has found a lukewarm conversion market in Europe, but just a trickle in the U.S. OEMs have sniffed at the project, but in the U.S., only Maule signed on to certify it in the M7/M9-230 variants, which deliver credible performance.

The 305 is a 230-HP compression-ignition engine approved to run on Jet-A. Its a four-cylinder, four-cycle design and uses a combination of air and oil cooling, compared to the Centurions (ne Thielert) water/oil cooling. Unlike the Thielert automotive adaptation, however, the 305 is a purpose-built aircraft engine that requires no reduction. It also swings a composite three-blade MT prop.

Thielerts conversion of an automotive engine had disadvantages with regard to weight, torque curves and complexity, but the automotive world brings one large advantage: the benefit of millions of Euros in research into cutting-edge diesel technology, specifically FADEC-controlled

high-pressure common rail injection. While the SMA engine has direct injection and it does have a FADEC, it doesnt have the electronically controlled pulse injection of the more sophisticated Centurion and Austro, so it exchanges efficiency for simplicity.

The Paramus club has been in existence since the 1950s so it knows a thing or two about aircraft operating economics. This was reflected in the clubs approach to analyzing the risk of converting its 1980 Cessna 182 from the stock Continental O-470 to the SMA. So what is the risk, exactly? As the club saw it-and we agree-the risk relates to SMAs seriousness of purpose.

The fact that it hasnt aggressively marketed this engine nor sold many leads to inevitable doubts. Why hasnt it sold? Whats wrong with it? Will they be there to support it?

“We actually considered that our biggest risk,” said Shane Lipson, the clubs financial officer and a checkout instructor for the airplane. “We really had to ask if we were buying into a Betamax,” he added, noting that the decision was placed before the clubs board where it didnt get a unanimous yes vote.

“The position we took is that if they go under, theres enough R and D invested in it and the technology is proven enough, that someone would support it,” Lipson told us. Worst case, the clubs investigation and projected timeline showed that a

conversion back to the O-470 would be feasible, if not necessarily desirable.

A second aspect of the risk was more knowable: Would the engine perform and how would it be supported? To flesh this out, the club contacted current North American operators, interviewed conversion shops (three are doing the work) and even buttonholed SMA management. In short, they plugged all this data into a spreadsheet that amounted to a forward-looking economic model.

The club had one additional advantage over an individual considering such a conversion and its huge: It could spread the $80,000 cost among 46 members who are ultimately equity share holders. Further, the sting of that high conversion invoice was mitigated because the O-470 was timed out and the club had set aside the money to overhaul it.

Second, due to some damage done to the engine prior to the work, the club had a small insurance payment to throw at the project. In the end, its investment was about $45,000, which it will finance through a $25-an-hour surcharge on the diesel. For the O-470 airplane, the club billed members $149 per hour, on wet tach time. Historically, it knew that this generated enough revenue to cover real operating costs, plus reserves for engine overhauls and avionics upgrades.

For its first nine months of operation, the SMAs real operating costs-also allowing for reserves-appears to be about $110 an hour. Add the $25 capital recovery surcharge, and the rate is $135 an hour, still less than O-470 engine. If the engine makes its proposed TBO of 2000 hours, the club is figuring on a seven-year payback, worst case.

But there are good indications it will do much better than that. “I really wouldnt gloss over this. Theres a significant amount of savings in routine maintenance [over the Continental engine]. That will get you an earlier payback,” Lipson says.

Further, if the engine reaches a 3000-hour TBO, which SMA proposes it eventually will, Lipson sees the economics as slam

dunk. At a 2000-hour TBO and an overhaul cost in the mid-20s for the O-470, the club uses a $15-per-hour engine reserve. SMA estimates SR305 overhaul costs in the $35,000 range, but the club is actually budgeting $45,000, worst case. Based on the same 2000 hours, thats $22.50 an hour. While thats higher than the O-470, the club finds that its easily offset by three to five gallons per hour less in fuel burn, effectively reducing the hourly reserve substantially. If the engine makes 3000 hours and SMA overhaul costs prove on target, the engine reserve falls to under $12, even ahead of fuel savings. Fac tor in the lower fuel burn and the fuel savings over the O-470 may actually more than pay for the engine.

Before we took a demo flight in the Paramus 182 with the clubs Tomoharu Nishino, we compared the weight and balance figures of the SMA against the gasoline engines. The two are almost an even swap on both payload and performance. The Continental versions empty weight was 1920 pounds and with the SMA conversion, the empty weight rose modestly to 1945 pounds. This also shifted the CG forward slightly. Useful load is about 1000 pounds.

The 182 retained its 88-gallon tanks so even though Jet-A is a pound heavier, this is easily offset by the lower fuel burn so real-world payload actually increases slightly for the equivalent fuel range loading.

In conversations with OEMs about why they havent adopted the SR305, the question of temperature limitations and performance comes up. And indeed, the airplane has some temperature issues.

chokes off the oil cooler, the operating limitation below 7500 feet is -20 degrees C.

Regardless of temperature, the airplane is hard limited to 12,500 feet. Nishino told us the ceiling limit isnt an issue for the club because members dont fly that high. A private owner or partnership might feel differently.

The morning we flew, the temperature in Caldwell, New Jersey was 24 degrees F. Although the airplane had been in a hangar overnight, it had cold soaked for more than an hour when we started it. It fired right up, but with a noticeably rough idle which smoothed after a minute or so.

Runup involves checking the FADEC warning light-its go/no go and cycling some warm oil through the prop, which is otherwise controlled entirely by the FADEC. In place of the Cessnas push/pulls, theres a T-handle throttle on a quadrant with a lever to the right for fuel control-forward is full automatic, full aft is manual override for mechanical fuel injection.

The takeoff is smooth and quiet. In cruise, we measured a sound level of 93 dB with little discernable exhaust note. Despite the frigid temperatures, the heater kept the cabin toasty. Initial climb rate was a bit over 1000 FPM, just as the POH predicted and well in line with the O-470s numbers. Although the Paramus 182 is not equipped with fuel flow instrumentation, the POH for the SMA engine says it should deliver 134 knots true on 10.6 GPH at 5000 feet compared to 136 knots on 12.3 GPH for the O-470. We couldnt confirm the precise fuel flows, but Lipson told us club records-which give good block data-indicate that the fuel Delta between the gas and diesel engines is more than the POH suggests and averages as much as three to five GPH. One reason for this is that pilots may not have been consistently leaning the O-470 and SMAs fuel estimates appear conservative.

One operational difference thats noticeable is the manifold pressure: A turbocharged diesel needs a ton of it so max boost is in the 80-inch range, with cruise at 65 inches. Another limitation comes to light on final approach. When power is reduced during approach, it must remain no lower than 45 inches until the runway is made. The 182 is draggy enough to make airspeed control workable at this high value, but Nishino said nonetheless that to land slowly, approaches have to be high-angle affairs with all the flaps out and the runway made before power is idled.

“Ive done a number of checkouts in it,” Shane Lipson told us, “Its a pleasure to fly. Speed management is a little more challenging, but were an all-Cessna club, so its not really

much of a factor.”

Despite the big dollar risk, the club is pleased with the SMA conversion and the airplane is its most popular ride. When we asked for final impressions, Lipson had two: First, its expensive. “I think to make the investment work, you have to be willing to look out five or 10 years,” he said. Second, SMA has taken an odd, low-key attitude toward selling the conversion, something that Nishino sensed as well. “Its almost as though theyre not making an attempt at marketing it in the way you expect traditional marketing to be,” Lipson told us.

Nonetheless, both club members told us that SMA has done an excellent job of supporting the engine and when Nishino experienced an alternator failure, the company stepped up with whatever information was needed to get the airplane repaired away from homebase.

For its part, SMA concedes that it hasnt sold the SR305 aggressively because it plans additional improvements that might be available by mid-2010. Patrick Canivet, who operates Fly Jet-A, an SMA conversion house in Sarasota, Florida, told us these improvements will probably include higher certified altitudes and an upgraded turbocharger.