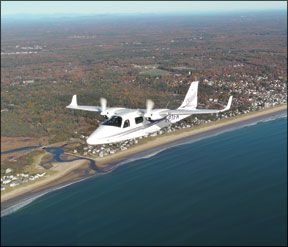 Despite being one of the bigger players in LSA market, Tecnam Aircraft isnt well known in the U.S. The company has actually been building aircraft and aircraft parts for over 60 years, and has 3000 aircraft flying worldwide. For comparison, Cirrus Aircraft and Diamond Aircraft have each delivered slightly over 4000 airplanes to date.

Tecnam is reorganizing in the U.S. with a new website (www.tecnam.net), an expanding dealer and support network and a new aircraft: the Tecnam P2006T light twin.

The P2006T (That name doesnt quite roll off the tongue, does it?) has specs more like a single than a twin. Its gross weight is only 2601-50 pounds more than a Cessna 172SP-and cruise speed is in the 140- to 150-knot range. The really novel item is that the P2006T sports two Rotax 912 S3 engines. The S3 is the certified version of the Rotax found in most LSAs. Each engine puts out about 100 HP.

When Diamond Aircraft introduced the Katana (DA20) with a Rotax engine, the market balked, but the LSA movement has both proved the reliability and improved the general acceptance of these motors. More shops know how to fix them, and the growing price of 100LL makes burning automotive gas when possible a more appealing option.

If youre an aircraft buff, youll pick out right away that the Tecnam Twin looks like a scaled-down version of the Partenavia P.68. Thats because they were both designed by Luigi Pascale. Pascale has been designing aircraft since the 1940s, and all that experience shows in the P2006T.

The P2006T sits low on the ramp. While its a high-wing aircraft, a six-foot-tall adult could stand on tip-toe and see the top of the wing. That cabin height makes getting in feel like stepping into a car rather than climbing into an airplane as were accustomed to doing.

In fact, the cabin ergonomics overall are excellent. Its 49.2 inches wide, but the rectangular fuselage means both front and

rear seats enjoy that width. Its only a foot longer than a Cessna 182, but, being a twin, much more of that length is available for legroom. Theres also a spacious baggage area rated for 176 pounds, and the rear seats come out in less than a minute for van-like capacity. The front seats are accessed through a door on the pilots side, and the rear seats from a door on the right side of the fuselage under the wing.

The developmental aircraft we flew had a somewhat cluttered panel of switches, gauges and indicators, with some items on the far right blocked by the control yoke. Wed expect to see this cleaned up a bit in the production models. Overall, there is plenty of panel space, plus an overhead for engine-related switches and fuel controls.

Startup and taxi begins to reveal the twins dual personality. The start of two engines and heavy feel of the rudder pedals in taxi feels like most twins, but the light overall weight makes the aircraft bounce over pavement cracks like a trainer. We also noticed that having the engines out on the wings removed much of the high pitch and vibration of the fast-spinning Rotax engines. The P2006T has constant-speed props, so the tachometer shows the gear-reduction prop RPM, and the throttle changes manifold pressure. Its easy to forget the engines are doing between 3000 and 5500 RPM in flight.

Pascales skill shines when the P2006T is in the air. It nails the sweet spot between responsiveness and stability, with a slight preference for stability and some feeling of weight in the controls. Stalls were benign. It holds trimmed speed tightly. We found a slight Dutch roll and slight pitch up with power

reduction, but its hard to find anything to complain about in handling.

The twin is a sprightly performer. We saw 1100 FPM climb and 151 knots true at 5000 feet at 4 degrees C. The aircraft we flew didnt have fuel flow gauges, so we have only Tecnams word that it was 10-11 GPH. One thing weve learned about the Rotax is small power changes mean big fuel flow changes at high RPM. Fuel burn could have been over 12 GPH without us knowing.

The aircraft could hold 5000 feet on one engine even when the other was windmilling at idle. The low power of the Rotax and the close mounting of the engines to the centerline meant almost brain-dead single-engine work. Rudder trim is available, but we simply didnt need it even all the way through a single-engine ILS and missed approach. On the single-engine missed, we saw a climb of 200 FPM with three people aboard and half tanks. Published numbers are 230 FPM on a single engine with a 7500-foot single-engine service ceiling.

Transitioning from a single to this twin should be no problem, even for a pilot who tries to land it like a 172, as we inadvertently did on our first attempt. Stall speed is only 49 knots with full flaps and the gear are beefy, trailing-link.

Additional nice touches were warnings on the PFD for unsecured doors and an additional escape hatch in the passenger-area roof. The G950 glass cockpit lacks the superb Garmin GFC 700 autopilot, so Tecnam offers the capable S-Tec 55X and mounted it in a prominent spot above the Garmin displays.

The Penalties of Light

To hit the weight Tecnam needs to perform acceptably with only 200 HP, it took a page from its LSA playbook in doors, seats and trim parts. These are super-light on the P2006T, and we expect theyll see the same wear-and-break rates were seeing on many LSA parts. We also wonder if consumer demand for a more-finished interior will swell the Tecnams empty weight and rapidly erode the useful load. Bumping up the gross weight would probably require going to the turbocharged, 115-HP Rotax 914, an upgrade that Tecnam has told us is in the works.

Light weight also means light wing loading of 16.3 lbs/ft2. Thats halfway between a Cessna 172 and 182, and significantly less than a Cirrus SR20 (21 lbs/ft2). The result is that the P2006T bounces around in light turbulence and gusty winds. That might be fine for flight training, but wont be as popular with private owners.

While we like the Tecnam Twins rear door in theory, we dont think it works out so well in practice. Entry must be from behind, where you duck under the wing, but the door motion is stopped by the right-engine nacelle. The right rear gear door also sticks out right at shin level. Not only might that give an unwary passenger a surprise, it could leave you AOG if it gets bent during loading. Incidentally, the gear is also quite slow to cycle: 18 seconds for full retraction or extension.

The Rotax engines offer terrific power-to-weight, but they can

be hard to get precise power adjustments when below 3000 RPM. With one engine on an LSA this is a non-issue, but with two engines it shows up on instrument approaches. We dont see this as a big issue, but we did find small power changes hard to hit precisely when at reduced power.

“Assumptions” is the watchword when trying to figure costs for this airplane. The biggest question is whether or not you can consistently burn 92-octane auto gas. Assuming $3/gal for auto gas, $5/gal for 100LL and an average of 10 GPH total (for about 150 knots), thats a delta of $20/hour in fuel. But its more involved than that.

Burning 100LL decreases the oil change interval from 50 hours to 25 hours, decreases the inspection interval for the propeller reduction clutch from 800 to 600 hours, and requires the removal of the oil reservoir every 200 hours to flush out accumulated lead. Oil changes on the 912 involve all of three quarts of motorcycle oil. But the gearbox would be 3-4 hours labor and $80 in parts. Note that “burning 100LL” means burning it more than 30 percent of the time.

Put these numbers on the whiz wheel, along with other miscellany, such as a 200-hour carb inspection thats about five hours labor per engine and $60 worth of parts, and you get $73.91/hour variable costs for the P2006T on mogas versus $101.54 for 100LL. Thats a sizable delta. But then again, roughly $100/hour variable costs for a twin is still impressive.

Insurance is just a gaping unknown. Twins are notorious for stratospheric rates, particularly in a flight training environment. Mitigating factors might be the docile single-engine handling and that a gear-up landing wouldnt require an engine teardown. Not only does the Rotax clutch protect the engine, the short props on the P2006T probably couldnt hit the ground if you tried. Tecnam North America is planning an extensive training program, and is working with insurers to

In terms of the airframe itself, Tecnam has proven itself responsive and rapid with parts for its LSAs, and much of the aircraft is conventional aluminum and standard parts, so we dont expect any surprises there. Tecnam North America is also working to build its infrastructure in the U.S.

Given the complaints that there are few new complex trainers or twin trainers, were confident the P2006T would appeal to a flight school-especially if the school can fuel it with auto gas. Were not as confident about private owners. There would have to be a longing for the large passenger/cargo area, a need for that second motor or a phobia that 100LL wont get a viable replacement for the P2006T to look better than a high-performance single.

Tecnam is pricing the twin at $410,000 with analog instruments, which puts it just north of comparable singles. We expect nearly all sales would be with the glass panel and other goodies. Fully loaded, the P2006T would run about $550,000. While neither sum is chump change, these prices are six-digit discounts compared to the other contenders in field of new twins.

We asked Ben Young, VP of Business Development and Marketing for Tecnam North America, how he felt about the current aircraft market and the twins prospects. “I dont think

the timing could be better,” he told us. “You almost feel guilty about the twin thing due to the fuel burn, but this is something much more reasonable. I also think having the twin adds credibility to our LSA models.” Young also told us that long-term plans might involve certifying Tecnams Sierra RG, which would bring a two-place, retractable-gear, Rotax-powered trainer to the U.S. As of this writing, 100 P2006Ts are on order in Europe with 12 delivered. Tecnam expects FAA certification early next year for the analog-gauge model with G950 certification by mid Q2.

If Tecnam can keep the cost and empty weight down, and if the operator can predominately use auto gas, and if insurance doesnt prove too burdensome, then Tecnam could have a hit with this very light twin. Thats a lot of ifs, but having a sweet-flying, well-designed aircraft that is hitting its performance numbers is a good start.