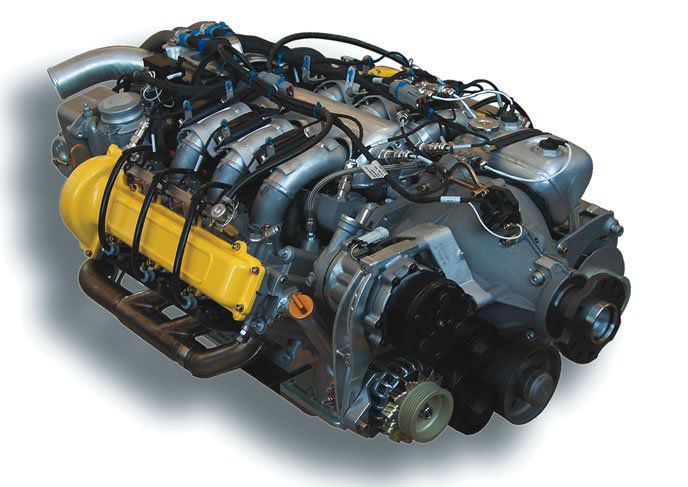 At Lycoming, executives roll their eyes when they hear “Lycosaurus” used to describe the lack of innovation in aircraft power plants. That suggests that the market hungers for engine innovation, but the reality is something different, as Rotax discovered in 2006.

With a great deal of marketing flourish, orchestrated by the Bombardier Canadian mothership, the company announced the future of aircraft engines in 2003: Two innovative V-6 designs, one at 225 HP and a second at 300 HP. True to the Rotax philosophy, these were small-displacement, high-revving, geared engines with overhead valve gear. They were watercooled and had both fuel injection and electronic ignition, just as the four-cylinders now have.

The engines attracted a lot of attention, including from us. Rotax spun off the project to a marketing entity called Aircraft Engine Services, which rebranded the product as REV, reflecting the engine’s operating envelope.

Two years into the launch, the project was clearly struggling and wasn’t supported the way we’ve seen Rotax do product launches since then. At AirVenture 2006, this was our take on the engine: “AES says it has an OEM customer for this engine, but for more than a year has steadfastly refused to say who the airframer is, claiming the company is worried about overhanging the market and losing sales. Call us skeptical. A couple of OEMs we talked to at AirVenture like the looks of the Rotax engine but wonder if it has enough benefits over a Lycoming or Continental to justify the certification costs. AES may yet prevail, but we think they have an uphill struggle.”

Within three months, the project was cancelled, the victim of both market realities and of new management who understood the company’s core focus was recreational engines, not aircraft engines. At this juncture, Bombardier had divested itself of direct ownership of Rotax, allowing the company to branch out and sell to other businesses.

During my visit to Gunskirchen last year, I was surprised to learn how far along the project actually got. The production tooling was in place, tested and ready for use. Spare parts, support and training were being arranged and at least one of the mystery OEMs was Cirrus. Alan Klapmeier told me the company was ready to move forward when Rotax pulled the plug.

Could it have succeeded? I think the odds were long, a view shared by some at Rotax. New engines have teething pains and two years after Rotax bailed, the bottom dropped out of general aviation, once again. The V-6 engines missed on a couple of marks.

They still required 100-octane fuel and were more complex than traditional air-cooled aircraft engines, a complaint the four-cylinder engines suffer yet today. They were also relatively heavy. My guess is that Rotax figured this out and did what so many failed aviation companies have not: They killed the project.