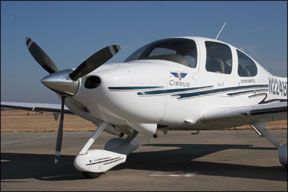 Does the world need another turbocharged Cirrus SR22? Continental thinks so, because at AirVenture Oshkosh it rolled out its long-rumored TSIO-550 demo project for the SR22. We know this project has been an on-again, off-again effort between Cirrus and Continental and now it looks like its on again, at least from TCMs point of view.

stock 310-HP IO-550-N but with the addition of two turbochargers and lots of intercooling. Unlike traditional systems from Continental, the Tornado Alley system doesnt ground boost the engine but allows it to maintain sea-level manifold pressure well into the 20s. Technically, the turbonormalized system doesnt have a critical altitude since it boosts to sea-level to the airplanes certificated ceiling of 25,000 feet.

Continental-and Lycoming-have always had a beef with turbonormalized systems because they retain the normally aspirated engines high-compression (8.5 to 1) pistons, which the factories believe reduces detonation margin below acceptable limits. Tornado Alley counters by saying that with correctly engineered intercooling and careful baffling, the high-compression engine has more than enough detonation margin. By now, there are several hundred Cirrus TNs flying and owners weve interviewed havent complained about high heat or apparent detonation. Service history for the TN airplanes appears to be favorable, according to Cirrus and owners.

So, why would Continental bother with offering an engine thats ground boosted but ostensibly the same power? Because TCM asserts that its engine provides better performance, has better detonation margin and because it would like to get back from Cirrus some of the business it lost to Tornado Alley.

One reason Cirrus went with Tornado Alley in the first place, Dale Klapmeier told us two years ago, is because Continentals turbo project didnt perform as well. It had heat problems that Cirrus didnt like and Tornado Alleys system was proven and ready to go off the shelf. Further, Klapmeier said, because it was an STC addition, the Tornado Alley system could be removed if high octane fuel availability became an issue.

Continentals plan, at this juncturet, appears to be to offer its 310-HP TSIO-550-G as a straight-up replacement for the turbonormalized engine when those engines come up for overhaul, which some likely will in the next year or two. Although no prices were quoted at Oshkosh, owners would presumably be offered sweet deals on an overhaul/STC package.

Were also quite certain that Continental would like to woo Cirrus away from Tornado Alley and to get the factory to begin installing TSIO-550s as original equipment. We dont know if Cirrus will bite or not.

In our view, theres no compelling reason to switch from a 310-HP turbonormalized engine to a 310-HP ground-boosted engine. Horsepower is horsepower and the two

would perform so similarly as to present trivial differences. We dont buy the detonation argument because Tornado Alley has proven that generous intercooling dispenses with the high-compression piston demon.

But what if the engines arent of equivalent horsepower? Heres where things get murky. When we flew with Continentals Keith Chatten in an SR22 equipped with the TSIO-550, he told us that Continentals tests with an on-airplane torque rig revealed that the Tornado Alley installation doesnt produce 310 HP, but more like 280 HP.

Why this is so, were not sure, but Tornado Alleys George Braly disputes the claim. He says the TAT engine produces full sea-level manifold pressure and horsepower-thats nominally 310-right to the airplanes certificated ceiling. He concedes that some Continental engines dont produce rated power right out of the box, so some show a little less than 310 HP. We dont know how much less.

By way of counterpunch, Braly, after reviewing the video of our test flight, told us that he believes the Continental demo engine we flew at Oshkosh was delivering more than the claimed 310 HP. Our review of the type certificate data sheets for this family of engines doesnt put this spat definitively to rest. During our flight, we saw boost in excess of 35 inches-how much in excess we dont know because the instrument was pegged with a manifold pressure warning showing on the Avidyne MFD-and at 2660 RPM.

There are five variants of the TSIO-550. The type certificate for the E-model shows 350 HP at 38.5 inches of MAP and 2700 RPM. The C-model delivers 310 HP at 2600 RPM and 35.5 inches. Continental told us the version we flew was a TSIO-550-G similar to the engine used in the Mooney Acclaim, where it is de-rated by RPM limiting to 280 HP. The G-models TCDS calls for 310 HP at 2700 RPM and 34 inches and Continental insists we flew a 310-HP engine. What about the overboosting we saw? Instrument error, said Continentals Chatten, by about an inch of MAP. Further, we noted that the Avidynes engine monitor showed 122 percent, which works out to nearly 380 HP if 100 percent is based on 310 HP.

He Said, She Said

Bottom line, we dont have enough data to know whos right and whos wrong here. Both Continental and Tornado Alley promise to provide additional test data, but the only right way to do this is verification via torque metering by an independent party. Next best is a direct flyoff.

In our view, the Continental engine was overboosting by some amount and were frankly skeptical of the instrument error claim. Whether this made a substantial difference in horsepower, we simply cant say. We do know that the airplane climbed like a scalded cat and cruised faster than the TN at low altitude. So either it was making more power than Continental claims or Tornado Alleys version is making less. Or maybe both. Well let you know if either company is forthcoming with additional data.

For now, we reserve judgment.