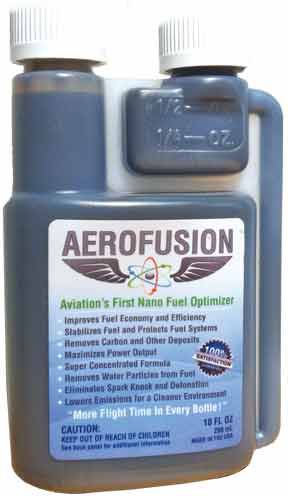 Everyone wants it to be true; let there be a long-lost secret that reverses aging, cures the flu overnight or squeezes 50 more miles out of every tank of gasoline. Trying fuel additives is rather like buying the occasional lottery ticket. You know the odds tower against you, but what if this one is a winner?

When we met Keith Lange at Oshkosh last summer, he enthusiastically offered us two bottles of AeroFusion to test and review. He did so without qualification or condition, and we got the feeling he honestly believed in his product. He sells it with a 100-percent money-back guarantee, which not something you’d do if you expected unhappy customers. We said we’d give it a try.

Power Claims
The big claim from Aerofusion is you’ll get more bang for your avgas buck. You’ll go farther on a tank of gas and climb faster. The method of activation here is tiny metal particles of primarily magnesium but also some iron. The exact compounds and rations are a company secret. Lange tells us that the power enhancement comes from magnesium salts in AeroFusion breaking down long hydrocarbon chains, making them more prone to complete combustion.

The ideal test for this would have been on a dynamometer attached to an aircraft engine. The only one we have access to already had a full dance card doing unleaded fuel testing, so we did the next best thing: We flew with AeroFusion in an aircraft equipped with a good engine monitor and downloaded the results for analysis.

Following the company’s instructions, we added it to the tank and then added the fuel to promote mixing. The amount of additive is tiny: ½ oz. per 20 gallons of fuel (a 1:256 ratio) for the first five tanks of gas and ¼ oz. per 20 gallons after that. The double dose initially is because the product claims to clean engine deposits as well as promote a better combustion event.

We saw no measurable increase in true airspeed or manifold pressure for a given fuel flow, or decrease in fuel flow for equivalent speeds and power measurements. We actually saw a lower climb rate on the Aerofusion tank, but also a slightly lower fuel flow. We think this is strictly due to limitations on how precisely we could control the two climb tests and doesn’t represent a real difference.

Sadly, this lack of support was what we expected. Unless it’s a catalyst in the tank gas, it’s hard to imagine how 600-800 ppm of any material will have any effect. But if action is catalytic, then that would require some at least mildly exothermic reaction in your fuel tanks to drive it forward. We’re not sure we like the sound of that, either.

The company says that most pilots see results right away, but with excessively dirty engines, it can take longer. When pressed, Lange told us his testers reported one- to two-percent gains in efficiency from the first flight with increases up to anywhere from 8- to 24-percent gains after several flights.

This doesn’t make logical sense to us. Brand new engines with no carbon deposits don’t typically run 7- to 22-percent more efficiently than dirty ones. Lange also told us the first place he sees the effect is in CHTs and EGTs as carbon burns off. We went back to our test data and found no differences there, either.

With only one test flight under our belt, we couldn’t assess the claims of a cleaner burn, but our discussions with Ed Kollin, an oil and fuels expert we know with substantial experience in the industry, says there’s at least a logical validity to this. The magnesium could promote the removal of carbon deposits. Similar technology to what AeroFusion uses has been used to reduce buildup in oil burners for over 80 years.

AeroFusion could also have a positive effect on emissions, as claimed on the company website. However, the chemistry on the company website shows reactions with sulfuric acid. Sulfur has been so reduced in modern fuel that this is really a minor player today. The claim of water absorption also could have legs, but this could theoretically interfere with Aerofusion’s other actions.

Lange told us he has test data from years of testing in his VariEze and from many pilots he contracted with to test the additive. But his legal counsel recommended against sharing any of that with us until his patents are complete. He pointed us to a similar patent, but in that case the product was aimed at diesel engines.

We asked to speak with some of the pilots who have testimonials on the AeroFusion website, but none were willing to talk to us. In fact, Lange told us, “They all say they do not have any specific hard data to give you except they are happy with the results Aerofusion provides. I really did not expect this, especially from pilots who love to talk.”

We planned to conduct more flights to see if the test results changed, but concerns arose in our discussions with chemists and lab tests that prompted us to stop.

Unanswered Questions
It’s likely that AeroFusion is an auto-ignition enhancer—similar formulas are used for that in diesel engines. That means, by definition, AeroFusion could reduce octane. Kollin feels the depression could be as much as five points, but can’t say that for certain without testing. We posed that question to Lange and were told this was not true, and that he would send us a reference article to prove it. We had not gotten that article, or other promised reference material, by publication time.

Our lab tests by Blackstone Labs showed the expected high levels of magnesium, as well as iron and calcium from other components in the formula Lange has developed over the past five years. We were surprised by the presence of silicon at 252 ppm. This isn’t a risk to engines in itself; the silicon would be diluted to less than one ppm and it’s presumably at the 1/100 micron nano-size like the rest of the additives, so it’s unlikely to clog or abrade anything. It’s a concern because it’s a contaminant, which raises questions of quality control where Aerofusion is made. Lange agrees the silicon should not be there and told us he will test his own samples from that batch.

AeroFusion is not approved for certified engines. The company is working toward that, but makes no direct claims that it’s FAA approved. We checked with the FAA’s Engine and Propeller Directorate and received a clear message that using it in a certified aircraft would be a violation. However, we had initially thought it was approved, partly because the majority of aircraft on the testimonial page were certified—including use in a turbine-powered King Air.

When we posed the possibility to Lange that this could be misleading, he admitted he could see why we might think that, and added that none of those aircraft owners are using the product any more. We noted before publication that the King Air testimonial, and the makes of aircraft in the other testimonials, had been removed from the website. Text had also been added to make it clear the product is for experimental aircraft use only.

Big promises, No Proof
It’s impossible to talk to Lange at any length and not feel his passion about aviation in general and AeroFusion in particular.

Passion and proof are different animals, however, and until AeroFusion can offer some quantitative evidence of its value and address the concerns about negative side effects and quality control, we’ll keep burning straight-up avgas.