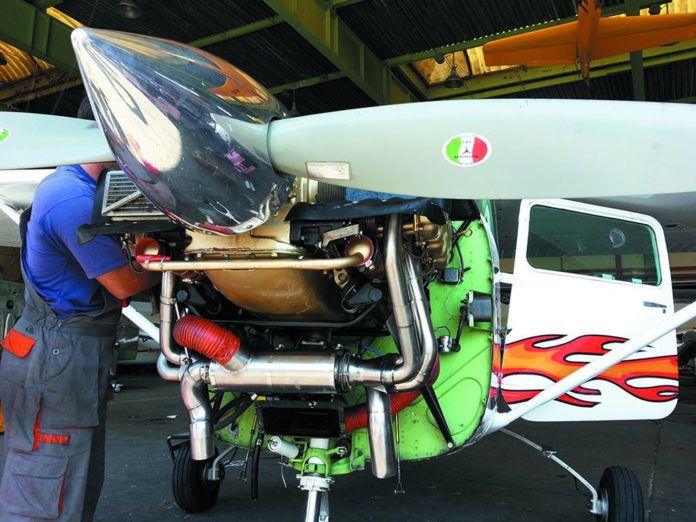 In 1995, following 10 years of running a company that performed aircraft exhaust system repairs, Dane Wagner opened Leading Edge Exhaust Systems (LEES) (www.wemakeyoufly.com), in Anchorage, Alaska. He was determined to build aircraft exhaust systems that were not only of higher quality and more robust than OEM equipment but that would allow the engine to develop more power. Having experience with the needs of the Alaska bush operators, he targeted their airplanes of choice, the Cessna 180 and 200 series and the Piper PA12, 18 and 20/22. The Cessna 182 system is shown in the inset photograph.

Prior to and during his aviation career, Wagner had been involved in automotive racing, including the Indianapolis 500 and made use of technology for exhaust system efficiencies developed in the automotive world in the design of LEES exhausts.

Wagner worked to incorporate laminar flow technology into the systems and chose not to use the stamped out and welded together half-sections common in OEM exhausts as he said they create flow turbulence and back pressure on the engine. LEES exhausts use separate, equal-length primary tubes that are mandrel bent—helping to balance the back pressure on the cylinders and create a low pressure at each exhaust port at the time it opens to facilitate scavenging of the products of combustion.

According to Wagner, the design also can enhance filling the combustion chamber with the incoming fuel/air mixture, improving volumetric efficiency and horsepower.

Leading Edge states that customers can expect to see a horsepower gain of approximately 10 percent using its pipes with a reduced brake specific fuel consumption (BFSC) and increased torque. It also states that its testing debunks the myth that removing muffler baffles increases engine horsepower—when it removed its patented baffles from its muffler, the dyno showed a loss of five HP and 10 pound feet of torque.

LEES primary exhaust tubes are made of 321 stainless steel that is 0.049 inches thick, some 40 percent thicker than most OEM systems. Leading Edge says that its beefier systems should last at least through engine TBO and offers a one-year, unlimited-hour warranty on most of systems, although for the PA-12, 180-HP short mount system, it’s 10 years or 1000 hours. For the exhaust collector for the 200-series Cessnas it offers what we consider to be an amazing warranty—20 years or 2000 hours of operation, and the warranty is transferrable. The company asserts it has customers who have put 5000 hours on its collectors.

Prices for Cessna 200-series exhaust collectors start at $2750; for complete exhaust systems for its Piper and Cessna lines, prices range from $4400 to $6500, depending on the specific system and options. According to its website, Leading Edge does not stock complete systems—yours will be built for your specific airplane once Leading Edge receives your order and deposit.