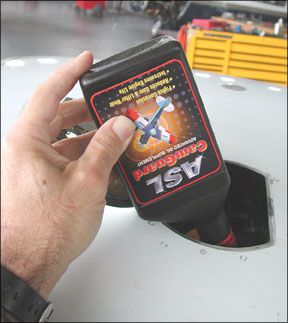 The companies that sell aviation oils tend to view their products as being like Mother Nature-and you dont mess with Mother Nature. Which is another way of saying that if they thought their oils needed a certain additive package, they would put that package into the product. It stands to reason, then, that if an oil company doesnt use a certain additive, you dont need it.

The fault in this logic is that its manufacturer-centric-it assumes that whats good enough for the oil company should be good enough for you. And if an oil maker doesnt use an additive simply because it costs too much, thats a marketing decision the customer would be ignorant of, not a technical consideration. This more than anything explains why the oil companies have been chilly toward an additive we think is promising-ASL CamGuard. Our bench tests of CamGuard have

proved promising, especially with regard to corrosion prevention, which we are increasingly inclined to believe is the more critical consideration than running wear. We recently performed an informal in-service test of CamGuard and were reporting on a more extensive test done by our AVweb colleague Mike Busch in his Cessna 310. His findings mirror our own.

In our most recent engine oil test (see Aviation Consumer May 2008) we bench tested BPs new Aviator line against the other popular brands. Part of that test included wear properties and anti-corrosion performance of CamGuard added to Phillips XC, which contains no specific anti-corrosion package.

CamGuards developer, Ed Kollin, told us his field data showed a 35 percent average reduction in wear metals but our lab tests-done by the same lab Kollin uses, by the way-didnt reveal this. We conducted two standard tests-the four-ball wear test and the Falex pin and block test. CamGuards Kollin told us the additized XC would have performed better had we conducted the test at lower pressures. (Exxon made the same claim for its Elite multi-grade.)

As a rejoinder, we conducted an in-engine test, additizing a fresh batch of XC and running it for 45 hours in a Continental IO-520. In the end, such tests are a better indicator of performance than bench tests, in our view. The engine had a total of 710 hours.

The outcome of this test proved mildly conclusive on wear metals. During the 45-hour oil run, Blackstones oil analysis revealed minor rate changes downward in aluminum, copper and nickel, metals which correspond to pistons, bearings and pins and exhaust guides, respectively. We noted a slight rise in iron-mostly from cylinders-but Blackstones Ryan Stark expressed no concern since iron tracks directly with hours of usage. We also suspect that because the airplane sits idle in a seaside environment, it may have accumulated some cylinder corrosion before the CamGuard treatment.

Would a longer test have yielded different results? Well let you know in a few months, as our tests with CamGuard continue. CamGuards Kollin told us the results we achieved on the first run of CamGuard were typical. Because the additive scours wear metals entrained in the lead sludge every aircraft engine accumulates, the first run of CamGuard typically yields an increase in wear metals, followed by a downward trend.

To test this theory, we spoke with our AVweb colleague Mike Busch about his more extensive tests in the two engines of a Cessna 310 he owns. Although he didnt conduct specific anti-corrosion bench tests, Buschs in-engine test results confirm our bench findings. (For a complete review of Buschs tests, see the November issue of the Cessna Pilots Association magazine at www.cessna.org.) )

For his test, Busch added CamGuard to the Aeroshell W100 single-grade oil he uses in each of the engines of his Cessna 310 in October of 2007. Busch changes his oil about every 40 hours, so the total test time over four oil changes was 180 hours.

In both engines, Buschs 180-hour test tended to confirm CamGuard claims in directionality if not necessarily by degree. Best case in the 310s right engine, iron dropped from about 1.1 PPM/hour to a little less than .9-a decrease of about 18 percent. Chrome, aluminum and nickel showed similar modest decreases. The 310s left engine showed a small increase in nickel wear metals, possibly due to a worn valve guide.

While these trends are desirable and certainly better than having them advancing in the opposite direction, we cant honestly say we think theyre determinative in the overall health or lifespan of a typical aircraft engine. In a properly lubricated and operated aircraft engine, wear metals trends are already low, so a modest reduction may have no meaningful effect on engine longevity. The larger issue is rust and on that count, Mike Buschs data revealed a more interesting trend.

Blackstones Ryan Stark told us when the lab sees spikes in iron wear, its usually because the airplane has been idle recently and the fact that Blackstone is seeing more iron spikes confirms what all of us know: Owners are flying less, either because of fuel costs or the economy in general.

Buschs tests plotted this directly and confirmed the notion that CamGuards largest value is its ability to prevent corrosion. Buschs oil analysis data extends over many years and he has always observed an iron spike after the airplane is idled for a few weeks for its annual inspection. After he added CamGuard to his Aeroshell W100, the same downtime didnt produce these expected iron spikes, which are caused by rust specks being swept off the cylinder walls by the pistons. This iron is then picked up by the oil. During the years we had our Mooneys Continental TSIO-360 on Blackstones oil analysis, we noticed the same trends.

Combining our own in-engine test with Mike Buschs experience in two similar engines leads us to believe our initial evaluation of CamGuard has been right all along. The additive is capable of measurably reducing engine wear metals, although perhaps not to the degree that the manufacturer claims. Shells W100 oil is basically a single-grade version of its popular 15W50 multi-grade oil and it contains an anti-wear additive plus Lycoming additive LW16702, an anti-scuffing agent. Although Shell claims superior anti-corrosion protection for its additized oils, we think that Mike Buschs in-engine tests and our bench tests reveal that CamGuard improves corrosion resistance. The modest anti-wear improvement is a plus.

What about cost? As additives go, CamGuard is not cheap, at $24.95 per pint, which treats a typical 8- to 10-quart crankcase and then some. However, if you add it to a less expensive single-grade oil such as Shells W100 or Phillips multi-grade XC, the cost is about the same as Exxons Elite or Shells 15W50. However, we think CamGuard has consistently demonstrated the best corrosion protection of any of the oils we have tested. Further, we prefer a mineral basestock oil over a synthetic blend because it has better solvent characteristics to flush the engine of lead compounds.