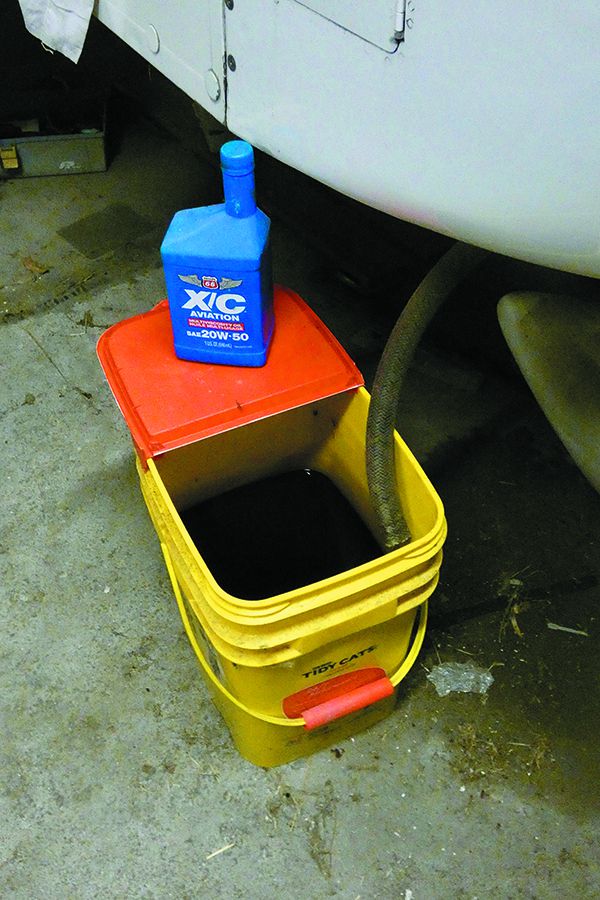 In my early days of airplane ownership, I might have been naive by today’s standard when it comes to engine oil. But it was stone simple—I flew my airplane, it needed oil, I bought some and changed it. Repeat.

Today, web forums are packed with endless threads where owners fret about filters, additives, change intervals, high use, low use, whether to dump it at 25 hours or 50 hours, whether to pour multi-viscosity or straight weight, use an additive or not, pay for a lab analysis or just visually inspect the screen or filter, use semi-synthetic or mineral and the idea of mixing viscosities. Let’s take a step back and review some basics in part one of this discussion on oil.

When I began flying and bought my first airplane back in 1974, I thought there were only straight-weight mineral and multiviscosity oils. When it was hot, I would use 100/50. When it was cold, I would use 80/40. If it was both, or I had a little extra cash, I would get multiviscosity to fly between seasons, and not worry about changing the oil when fall or spring rolled around. It was very handy. Back then, I would go from Shell straight weights to Phillips multiviscosity products without even thinking about it.

Now, Teledyne Continental claims that an owner should use the same brand oil throughout the life of the engine. Back then as a new aircraft owner, I wondered why I simply couldn’t use the much cheaper automotive oil. Why did I need that ashless stuff? When Mobile 1 automotive oil was introduced in the 1980s, a friend decided to try it in his Grumman Traveler. He changed his oil and flew from Kansas City to Atlanta and back. When he got back, he told me that his fuel consumption went down by 2.5 GPH. He loved it, until he learned that oil was leaking from every seam on his engine, coating the cowling and the belly. Not much science here. This is one guy, doing a one-time test with no numbers or controls so it is anecdotal. I understood it was the PolyAlphaOlefin (PAO) synthetic base oil that slightly shrinks seals that caused the leakage problems.

It wasn’t until about 2003 that the aviation world really began to take an intense interest in oil and additives. That’s when CamGuard was shown to the masses at Oshkosh. The company that brought it, Aircraft Specialties Lubricants (ASL), was a subsidiary of Aircraft Specialties Services Inc., the premier aircraft engine part machining shop in the country—definite street cred. In 1994, the owner, Greg Merrell, was approached by Ed Kollin, a formulation chemist who ran the Exxon research engine laboratory for the Advanced Fuels and Lubricants Group. It was working on Exxon’s “World’s Best” aviation oil.

The result of Kollin’s research working with manufacturers, overhaul facilities and machine shops led to the development of an oil that would do virtually everything an engine needed, and keep it clean, rust-free and with low wear.

However, the additives Kollin selected were state of the art and the cost was just too high. Exxon dropped the program because the marketing office decided that no one would pay the price of such an oil.

Exxon ultimately produced its Elite product, which was basically a copy of the Aeroshell 15-W50 with a couple of tweaks for marketing purposes. While many argue it was a better oil than the Aeroshell, Elite has recently been taken out of production. 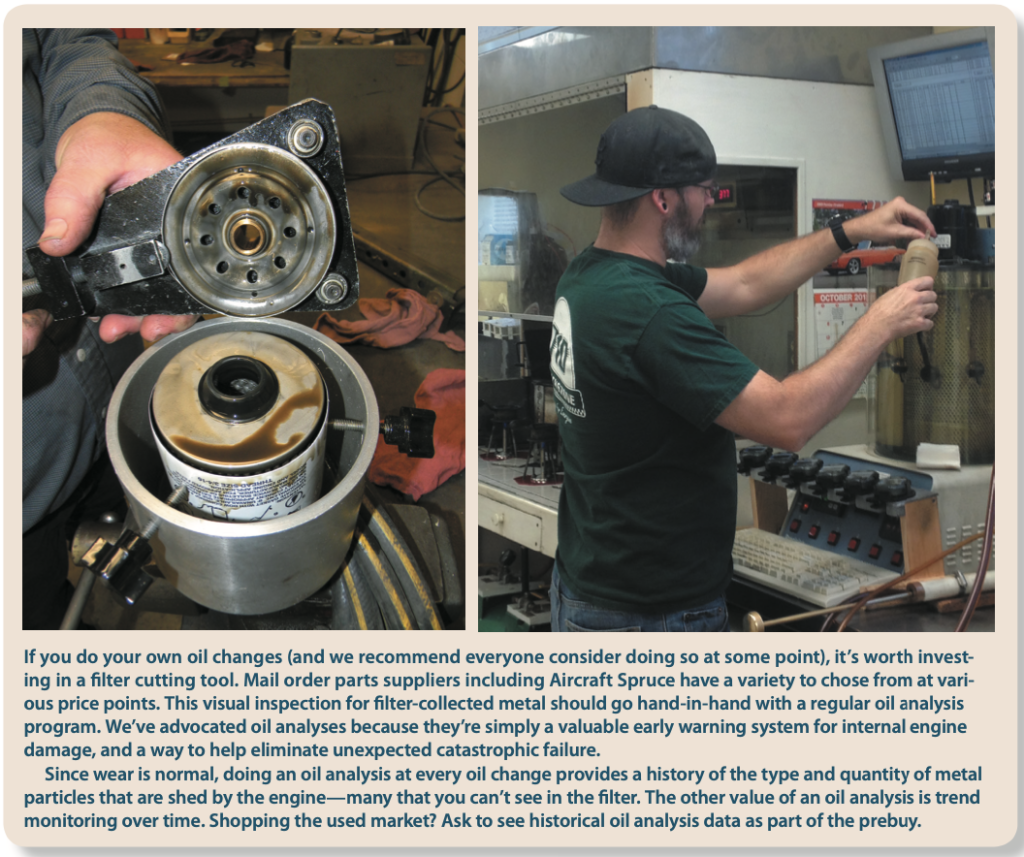 Remember that oils have to lubricate a number of different kinds of parts in the engine: Cams and lifters or gears in boundary lubrication (metal-to-metal contacts), bearings in hydrodynamic fluid films, crankshaft/bearings (parts separated by an oil film or wedge) and cylinders, which present a mixture of boundary and hydrodynamic conditions.

There are three types of aviation oil formulations on the market: mineral, synthetic and semi-synthetic, which makes up 95 to 99 percent of what pours out of the bottle, with the rest being additives. Mineral oils have been around forever. They come out of the ground and are modestly refined and distilled and refined into different viscosity (thickness) groups. Each group is composed of thousands of different types of molecules. Synthetic oil, at least the one used in aviation formulations, is built up in a chemical plant from small building blocks, and consists of just a few similar molecules with a lot of wonderful (and not so wonderful) properties. Semi-synthetic oils are mixtures of the two.

Mobil introduced a fully synthetic aviation oil that proved not to be viable in aircraft engines. Fairly quickly it resulted in sludged-up engines that suffered from sticking rings and other oil circuit plugging difficulties. Over 6000 engines had to be overhauled as a result. It’s argued that Mobil’s fully synthetic oil did not work because of poor solubility of lead salts resulting from combustion of leaded avgas.

Shell gets around this sludge problem by offering a semi-synthetic oil, blending synthetic and mineral base oils 50/50. Many can argue that there are other types of synthetic base oils that would work beautifully in aircraft, but the idea of a fully synthetic oil for aviation use is cast in doubt by the Mobil Av-One fiasco.

It should be noted that mineral oil has two distinct meanings in aviation vernacular. The first, described above, refers to the type of base oil used. The second is the use of the term “mineral oil” when referring to break-in oil and refers to the fact that the oil does not contain an ashless dispersant (AD). Uncompounded break-in mineral oils consist of mineral base oils with no ashless dispersant. Confusing, perhaps.

Aviation motor oils are available in a variety of single weights or single viscosities, W65 (SAE 30), W80 (SAE 40), W100 (SAE 50) and W120 (SAE 60), or multiweight or multiviscosity. Their selection is determined by the average ambient temperature. You can switch single-weight oils seasonally, and people do; however, it is far easier to go with a multiviscosity oil that  provides the correct viscosity for every temperature automatically, as if by magic.

Of course, it’s not magic but chemistry that allows for the production of multiweight oils. But what are they and how do they work? Multi-weight oils have viscosity ratings like 15W-50, 20W-50 and 25W-60, but what does this mean? The first number followed by a W is the low-temperature or “winter” viscosity and the second number is the high-temperature viscosity. A 20W-50 oil flows and pumps like a 20-weight oil when it is cold, but it does not thin out with increasing temperature like a single-grade 20-weight would do. Instead, the 20W-50 has the  viscosity of a single-grade 50-weight oil at high temperatures. The molecules open up like fist  into a flat hand, becoming ”fuller.” This is the essence of a multiweight oil—it does not thin out  as much as a single-grade oil. It achieves this with the use of polymer additives called, what else, viscosity index improvers. (Automotive STP is a viscosity modifier for old, loose engines.)

After leaving Exxon, Kollin reformulated the additive package to meet his performance requirements and that would eventually become the CamGuard product. This formulation was used by Merrell and his employees in all sorts of engines, and when satisfied with its performance, it was marketed to the experimental aircraft market on a limited basis where it achieved much success with a strong following. Sold as an additive package, the idea was to add CamGuard to the owner’s aviation oil of choice to create an affordable, high-performance protection package that addressed four issues of concern for all internal combustion engines: corrosion, deposits (carbon and sludge), wear and seal protection. With sales and promotion limited to a few ads and a small booth at Oshkosh and Sun ‘n Fun, the general market response was skeptically, “We hope it works—we need something!” Early on, Aviation Consumer conducted its own trials with favorable results.

Not unexpectedly, CamGuard made it into some factory engines and owners began to see the wisdom of their decision. When the product was accepted by the FAA on June 30, 2006, there was a ready market in place. The certification test engine was a normally aspirated 300-HP Lycoming IO-540 engine used in an aerobatic aircraft that flew in over 50 airshows. No other lubricant product has undergone certification testing under the rigors of aerobatic flight with routine oil temperatures of 300 degrees F and cylinder head temperatures of 450 degrees F.

This is science. The ingredients address the different temperatures or pressures in the engine, and are selected for their compatibility with the lubricants and fuels used. Our aircraft engines complicate things because of the leaded fuel used and the broad temperature ranges of an air-cooled engine. The seals in our engines are often different from those used in other motors and are adversely affected by the chemistry of certain popular additives.

My takeaway is the primary effect that CamGuard had on the community was growing awareness of oil additives. That the CamGuard product earned an “accepted” status from the FAA gave pilots some confidence that they could try CamGuard without endangering their engines. There are other additives that claim adding Teflon to the oil prevents wear, or that some materials soaked into the engine’s metal prevent wear, but in my opinion those claims are a bunch of hooey. CamGuard is an FAA-accepted, tested and validated additive package, and industry experience indicates that this is the right chemistry that could indeed work to help aircraft engines enjoy longer life spans. I suggest reading the oil blend decision-making Q&A article in the March 2020 issue of Aviation Consumer.

I scratch the surface in this article with a beginner’s-guide primer describing the simple basis of aviation oils, the base oils and two important additives—ashless dispersants and viscosity index improvers. These very useful additives have been available to us for almost half a century. There are other performance additives that have only more recently become available for aircraft engines, although they have been used in automobile oil for many decades.

Unfortunately, FAA certification and even FAA acceptance remains focused on the premise of “do no harm” as opposed to verifying that additives meet performance goals like every other engine oil product in the world. Combine this with a limited market and it is easy to understand the dearth of development of high-performance products.

Look for a follow-up article on this, with the results of a field survey on additives and specific blends, plus a roundup of the aviation oils on the current market, their chemical makeup and costs.