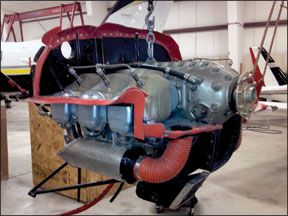 It goes from bad to worse. You sense something isn’t right with your engine, so you ask your shop to have a look. Hopefully it’s a fouled spark plug. Wishful thinking didn’t help because your shop called with news that you hoped not to hear for at least a few years: It’s time for an engine because half of the cylinders have low compression and there are valve problems, too. The shop suggests an overhaul.

With dollar signs dancing in your eyeballs, it’s decision time. Do you opt for a field overhaul or buy a factory engine? How about cylinders, hoses, engine mounts and downtime? These are major considerations.

The engine shop market is changing, so we conducted an engine shop experience survey on sister site AVweb.com to get a feel for how engine shops and the components they use are performing. We heard from 200 respondents. There were good, bad and awful experiences—here’s what we heard.

Cylinders and Parts
We conducted a cylinder survey in the April 2012 issue of Aviation Consumer, where Lycoming and Superior Air Parts (ECI) earned high marks for customer service and owner satisfaction. Based on our latest engine shop survey, Lycoming cylinders remain the most popular choice, at 34 percent, while ECI came in second at 19 percent. Continental cylinders earned high marks, also.

This trend was confirmed by shops we spoke with, who said that unless the customer requests otherwise, they often stick with factory cylinders. But the perceived best-of-the-best quality is sometimes only as good as the factory representative you speak with.

“Lycoming had the newest guy answer the phone and that lack of knowledge scared me off. I sent out my old cylinders, with a tracer on the cylinders to ensure that I got the same ones back from the shop,” said the owner of a Luscombe.

Others, like Cessna 210 owner William Miller, had bad luck with would otherwise seem like the best option—a new Continental engine.

Lycoming factory overhauls aren’t always perfect either, but could pay off in convenience when faced with a failure.

“The crankshaft oiler elbow dropped out of the crankshaft at 97 hours. Lycoming sent me another engine. While pilots on the field recommended an independent shop, I doubt the shop could have obtained a replacement engine,” said a Mooney owner of his IO-360 issues.

If you’re concerned about corrosion, ECIs Nickle+Carbide surface treatment is standard on ECI cylinder overhauls. The treatment is supposed to provide a harder, more corrosion-resistant surface than steel barrels. We’d consider it for engines that see little use. On the other hand, only 9.5 percent of the respondents reported premature corrosion problems. Speaking of corrosion, we also asked about engine preheater use, since improper use of electric preheaters might lead to condensation and corrosion inside the engine. Thirty-eight percent said that they preheat when they plan to fly the aircraft within a day or so, in cold weather. Seven percent preheat all the time in cold weather, and a surprising 55 percent reported that they don’t preheat at all. We’ll look at this topic further in a future evaluation and follow-up article.

Shop Matters
We understand that not every customer/shop relationship is a love-fest but we heard some nightmares about one popular shop, teaching a valuable lesson on the importance of customer service.

According to a Cessna 337 owner (who didn’t wish to be named, given all that he’s been through), “The engine overhaul was a total disaster. I sent it to New Firewall Forward in February 2011 and paid over $27,000 up front with a promise that I’d have the engine in two months. After two months, they quit returning my calls. After seven months, I finally had the engine—in pieces—shipped to another overhauler, where work was actually done (I had paid for new Superior cylinders, but never got them). New Firewall Forward promised a refund. I never saw a cent. In the end, it cost me over $50,000 to get my engine overhauled. I made a complaint to the Better Business Bureau and the Colorado Attorney General—neither one was able to get anything from New Firewall Forward.”

Dennis Weatherald is another unhappy Firewall customer. “After countless calls, fronting them the money for the parts on two different occasions, I finally flew in after seven months to see what was going on. I discovered that the mechanics are hard-working guys that will talk to you, but I don’t know how they stay in business,” he said.

“We are aware of previous issues customers have experienced with our shop because we read about it on the Internet,” he said. According to him, these problems date back to the 2011 time frame and have since improved.

“In order to improve our performance and guarantee customer satisfaction, we’ve made several internal policy changes and personnel adjustments. We do have many satisfied customers,” Lawson told us.

On the favorable side, shops like Zephyr Aircraft Engines in Florida continue to earn raves for outstanding service and quality.

Baron owner Gerald McCarley is one happy camper. “Zephyr has great customer service. They worked for me to get some concessions from ECI on cylinders that had an AD. I wouldn’t go anyplace else.”

“Zephyr did my first rebuild and my local mechanic and I could not be happier,” said Cherokee owner Jerry Metcalf.

“I like that I can call about anything and they will try to answer questions with real people on the phone,” said Steven Boggess, about RAM Aircraft. “This is the second time I’ve used Poplar Grove Airmotive and I would use them again. Highly recommended,” said E.M. Beck. They overhauled the Lycoming O-360 in his Cardinal, including crankcase and camshaft replacement.

Perhaps more important than the overhaul is the warranty support after the job, evident by Bill Quesnel’s experience with Ly-Con Aircraft Engines in California.

“Bad lifters from Continental resulted in damage to my cam. Ly-Con paid to have the engine removed, replaced the cam and the lifters and reinstalled my engine under warranty. I had no further issues,” he said.

You don’t necessarily have to deal with larger shops for a favorable experience.

Doug Pendleton had favorable comments about Don’s Dream Machines in Griffin, Georgia. They overhauled and upgraded the little Continental in his Aeronca for $16,000, which included new ECI cylinders, crankshaft, crankcase and camshaft.

“It was a fantastic experience. They have both expertise and quality,” he wrote.

“Powermasters in Tulsa, Oklahoma, gave me an engine that is better than new,” wrote Bonanza owner Joseph Fischetti. He spent $60,000 for his IO-550, which included crankshaft, camshaft and overhauled Millenium cylinders.

Twin Comanche owner Kris Widdison had good luck with One-Stop Aviation. They overhauled both IO-320s, replaced the camshafts and used overhauled cylinders. It cost $10,000 per engine. Too good to be true? “During my last annual, all compressions were still 78/80 and there was no metal in the oil, so the engines are holding up well,” he told us.

In-House Work
Of course, the engine rebuild is only half of the job. You still have to pick a shop to coordinate the field overhaul and accomplish the physical removal, reinstallation, ground running and paperwork. The engine doesn’t always need to be sent to a specialty engine shop.

Any certified powerplant mechanic with Inspection Authorization can perform the rebuild and sign it off in the logbooks. One IA we talked with admitted that local mechanics generally don’t have access to specialty equipment, including valve seat grinders, boring and honing machines and other overhaul tooling. This part of the overhaul is farmed out to shops that do.

This isn’t to say that we didn’t hear about good experiences on the local shop level, where the shop technicians did all of the work.

“I was given a tour of the shop, met all of the people that performed the overhaul and I was very comfortable with the shop before they accomplished the overhaul,“ said Trinidad owner Fran Ladd. Signature charged $29,000 total for the overhaul of his Lycoming IO-540, which included new Lycoming cylinders. From our survey, this price point is average for a basic field overhaul on a common engine with a good case.

Survey Says Drawing definitive conclusions from smaller surveys is difficult because a disgruntled customer could sink a shop’s ratings if happy customers didn’t respond. On the other hand, it was easy for us to spot the shops that nail customer service and win in overall customer satisfaction, even if some of their engines had issues.

Shops like Zephyr Aircraft Engines and Penn Yan Aero, for example, consistently earn top ratings in our surveys, which makes it easier for us—and clients—to recommend them.

It also proves that you don’t have to buy a factory engine to get a healthy combination of quality, customer service and warranty support.