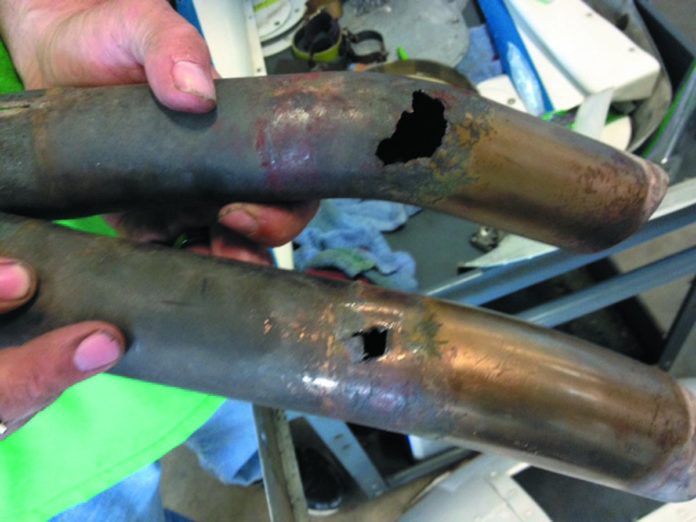 For most owners, the exhaust system is an out-of-sight, out-of-mind portion of the airplane. It’s certainly not a sexy part of any aircraft—even the FAA’s description of the exhaust system in its Airframe and Powerplant Mechanics Powerplant Handbook is a little off-putting: “…a scavenging system that collects and disposes of the high-temperature, noxious gases as they are discharged by the engine.” Nevertheless, all exhaust systems deserve a great deal of respect and your attention and consideration because they live in a horrible environment of intense heat, flame, corrosive gases and vibration. Plus, if any component fails, the risks are nothing short of serious: carbon monoxide poisoning of the aircraft occupants, partial or total engine power loss and fire.

Despite being made of materials designed to withstand the nasty process of ducting the products of combustion overboard, exhaust systems will eventually wear out and need to be repaired, overhauled or replaced. When that time comes, what are your options and what is it going to cost? We’ll go through a brief discussion of the makeup of exhaust systems, how they are inspected, what’s most likely to go wrong and what is available when your exhaust system has done its job and is ready for retirement.

The good news is that there are reputable specialty repair facilities and aftermarket suppliers of new and overhauled exhaust systems for virtually all general aviation airplanes and there are two companies that offer exhaust systems for some airplanes that claim—honestly, we think—to increase engine power output and aircraft performance.

According to shops and owners we spoke with, a new exhaust system may or may not make it to the engine’s TBO. As Scott Utz, principal of Arapahoe Aero on Denver’s Centennial Airport, told us, “The system not only has to withstand all that heat and vibration, it has to be light enough to fly.” Normally made of stainless steel or the nickel-chromium alloy, Inconel, an exhaust system wears from the inside out, which makes an evaluation of its condition challenging until signs of wear show up in the form of cracks, holes bulges or ripples.

Mike Busch, proprietor of Savvy Aircraft Maintenance Management, which manages a large number of turbocharged general aviation airplanes, told us that his company most often sees exhaust systems first develop problems on the outside radius of bends in the system—something that isn’t surprising when you think of what’s involved in getting 1600-degree gases to change direction. Busch told us that every system tends to have a component that shows wear faster than the rest of the system and a shop that is knowledgeable about that type of airplane will inspect accordingly.

What Can Go Wrong

As exhaust systems wear, the components become thinner and become susceptible to cracking from vibration, or bulging—and blowing out—from the pressure. If an internal component in, for example, the muffler, cracks and breaks off, there’s a chance it can lodge where it restricts the flow of the gases through the exhaust. That increases exhaust back pressure on the engine, so each cylinder cannot scavenge the combustion by-products out through the exhaust valve as effectively—reducing the power output. The power loss may be so significant that the airplane cannot hold altitude or that the engine will not continue to run.

An opening in the exhaust system in the heat exchanger for cabin heating means that exhaust gases are going to be introduced into the cabin. Pilot incapacitation due to CO poisoning is the cause of a few accidents every year.

If an exhaust system component breaks off or opens up, that means the blow torch of exhaust gases is being released inside the cowling. There’s not a lot of empty space inside the cowling, so the odds are good that the blow torch is going to be pointed at something important—perhaps a fuel or oil line or an engine mount. It doesn’t take long for that blow torch to open up a flammable fluid line and start a fire.

We strongly recommend that if your mechanic tells you that there is an issue with the exhaust system, that you take it seriously and have it repaired before your next flight. In more than one of its publications, the FAA states unequivocally, “You should regard any exhaust system component failure as a severe hazard.” We agree.

One of the common symptoms of wear in an exhaust system is the seizing up of slip joints. Slip joints are as they sound—one bit of exhaust duct slips inside another so that they can slide back and forth as needed to compensate for expansion and contraction as well as for movement of the engine on its mounts. Over time, those joints wear out and seize. Once the joint will no longer move, loads are passed to others areas of the exhaust system and cracks develop, usually adjacent to a weld.

Okay, your mechanic just said that components on your exhaust system have problems, notably a crack on one and a bulge on another. What are your options?

It is possible to replace one or more components of your exhaust system, although putting a new or overhauled part into an older system often means challenges with alignment of the system—and may cause other parts to crack.

When systems show signs of distress, shops tell us that their practice is to pull the system and send it out to a specialized shop asking the shop to “evaluate and advise.” The major players in the exhaust system repair/replacement field are Knisley Welding, Inc., Aerospace Welding Minneapolis (AWI), Heliarc Welding Service, Inc. (turbocharged Cessnas) and Acorn Welding (Canada)—the shops we spoke with recommended all of them. All of the specialty houses can do repairs and most offer new or overhauled components and systems. Overhauled means that some portion of the original component was reused. In some cases, the specialty houses have developed and received approval for modifications to original equipment systems that increase life or reduce heat on engine accessories by rerouting the system.

Because the system wears from the inside, the specialized shops have the equipment to measure the thickness of components and can give recommendations on whether they can be repaired or must be replaced.

Because turnaround time can matter, we recommend calling the specialty shops before sending out an exhaust system to assure that the one you use has replacement parts on hand in the event your system can’t be repaired.

Cost of replacement systems vary depending on whether new or overhauled parts are used and the size and complexity of the system. As reference, we were told to figure on $6000 for a new replacement system for a Piper Cherokee 180, installed.

Will a replacement exhaust system boost my engine performance? In general, no. While a new system should mean less back pressure on the engine than one that is slightly clogged with deposits built up over the years, the difference is probably not going to be noticeable. However, there are two companies, Power Flow Systems and Leading Edge Exhaust Systems (see sidebars), that have specifically developed and received approval for new exhaust systems that are designed to increase engine horsepower by reducing back pressure. The companies use techniques long in use in auto racing and, because the original aircraft manufacturers were generally just interested in safely finding a way to get the exhaust outside the airplane within the confines of the cowling, we are not surprised that the Power Flow and Leading Edge mods do work.

Aircraft exhaust systems balance the demands of weight versus longevity in an environment of horrendous heat and nasty vibration while generally being ignored by the aircraft owner. We strongly recommend that you eyeball the visible portions of your exhaust system for cracks and areas of gray soot on each preflight and make sure it is inspected carefully at each annual—and that you take seriously any signs of distress.

The good news is that no matter what you fly, there is probably a company that specializes in repair and replacement of the exhaust system on your airplane. And, if it’s time for replacement—for about the same price as replacing the system you now have—you may be able to buy a system that will increase power output and aircraft performance.