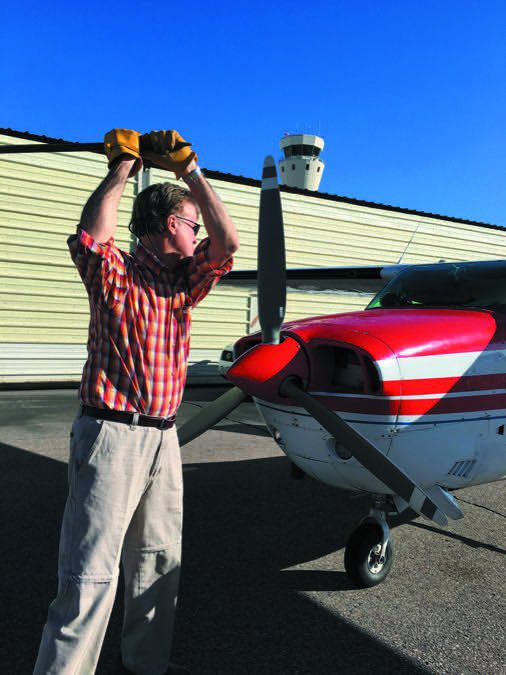 It’s long been recognized that an effective way of staring a fight in a bar catering to pilots is to innocently ask about procedures for hot starting big-bore Lycoming or Continental engines and then step back. The chairs will start flying.

That’s about what happened when we started the research for this piece. We heard it all. Being either foolish or fearless, we immersed ourselves in the subject to see if we could come up with information as to why hot starting is a problem, find recommendations for maintenance and operating technique that can minimize the problem and see if there are aftermarket devices that can help. We did, we did and there are.

Hot starting difficulties for piston-engine general aviation airplanes tend to be limited to fuel-injected engines that do not have some sort of computer-controlled ignition and/or fuel injection system. That means almost all higher-horsepower engines.

The classic “it won’t run” situation occurs on a warm or hot day, some 15-45 minutes after landing. The pilot tries to start the engine. It will catch, run briefly and then quit. Further attempts may or may not result in the engine firing at all. If it does, it will usually only run a few seconds before reciprocation ceases.

The underlying reason is that the fuel lines downstream of the fuel control unit through the distributor valve and to the individual cylinders are positioned so that they absorb the heat after engine shutdown. The fuel in the lines vaporizes—so liquid fuel is not getting to the fuel injector nozzles and the cylinder doesn’t get the appropriate fuel mixture for ignition. The problem is made worse by unresolved maintenance issues in the ignition system.

Hot start issues boil down to two: inadequately robust spark from the ignition system and fuel vapor that prevents liquid fuel from reaching the injector nozzles.

According to Mike Busch, founder of Savvy Aircraft Maintenance Management, during a hot start, the mags, impulse coupling(s), ignition wiring harness and spark plugs have to be in good condition to generate adequate spark because the fuel mixture in the cylinders may be less than ideal.

Busch told us that while the magneto manufacturers’ recommended 500-hour interval for inspection and replacement of components as needed (IRAN) is not required for a Part 91 operator, he strongly recommends it. We agree. In our May 2016 issue, we looked at magnetos in detail and found that within 500 hours of operation it’s not unusual for plastic components to wear or fail and for carbon tracking to induce arcing, throwing off mag timing and/or internal E-gap timing, leading to hard starting issues.

As would be expected, dirty or improperly gapped spark plugs will cause hard starting in general.

Another cause of weak spark is high resistance in the spark plugs. Each plug has a resistor that reduces the voltage from the magneto to an appropriate value for the spark that ignites the fuel/air mixture. Normal resistance for a new plug is 1000 to 2000 ohms. Plug manufacturers state that resistance may climb in service. The question is how much is too much. Tempest publishes guidelines recommending replacement once resistance exceeds 5000 ohms. Our research did not elicit consistent recommendations on the subject. Nevertheless, it’s our opinion that if you’re having starting issues, check plug resistance and replace any that are showing a level above 5000 ohms.

We have gotten good feedback from users on Champion’s SlickStart, an aftermarket ignition enhancer that can be thought of as a computerized approach to the shower of sparks concept. The $829 box was designed for Slick magnetos, but versions are available for some Bendix mags. It creates a long, powerful voltage for low-speed starting, increasing the length of the starter sequence and increasing the electrical energy to the plugs by up to 340 times that of an impulse-coupled spark.

The more common cause of hot starting woes is that following shutdown the heat of the engine rises and is trapped right where the fuel lines to the cylinders live. The fuel vaporizes, blocking the flow of liquid fuel to the injector nozzles. The sour spot for a hot start attempt is 15 to 45 minutes after engine shutdown. George Braly and his team at General Aviation Modifications Inc. (GAMI) instrumented some airplanes with big-bore, fuel-injected Continental engines to track post-shutdown temperatures in the cowling. What they found was that in addition to vaporizing the fuel in the lines above the engine itself, much of the residual heat was concentrated in the engine-driven fuel pump. The fuel vaporizes in it and the pump won’t pump.

During a starting attempt, the pilot runs the boost (primer) pump to prime the engine and then hits the starter. The engine starts on the fuel from the primer, uses it up and quits because all the cylinders then receive nothing but vapor.

There are a number of prophylactic steps that can be taken, including heat shielding the fuel lines, which—according to Mike Busch—pays big dividends. In addition, on airplanes with an oil access door on top of the cowling, opening it after shutdown allows much of the heat that would be trapped above the engine to escape. If the airplane has cowl flaps, parking it facing downwind, with the cowl flaps open, helps drive the heat out of the front of the cowling.

The solution for fuel-vapor induced hot starting problems is to get rid of the vapor in the engine-driven fuel pump and the fuel lines above the engine. Our research indicated this can be accomplished by following what is in most POHs for the airplanes, that Lycomings hot start more easily than Continentals—their fuel injection systems are not the same—and that there is an aftermarket product that looks promising.

iStart (www.istartair.com) is a computerized priming assist system with a secondary fuel injection system that samples the engine temperature and injects the appropriate amount of fuel for priming, cranking and starting. The additional plumbing is independent of portions of the engine’s fuel system. It’s only used for starting (not in flight) and cannot operate when the engine is running.

During start, the mixture control is left at idle cutoff while iStart adjusts the fuel delivery through its fuel lines. Once the engine is running, you advance the mixture control and set the throttle for 1000 RPM. Once 10 seconds have elapsed and RPM has stabilized, iStart shuts down.

The price is $995 plus specific fuel lines and fittings for the type aircraft (it’s STC’d on Beech singles and the Bellanca Viking thus far)—installation is estimated at a day. iStart has proven popular on experimental aircraft over the past six years. STCs are expected for Cessna singles followed by Piper and Diamond aircraft.

We think we’ve heard every hot starting technique known to pilots including “go to McDonald’s, get a burger and by the time you get back it’ll start right up.”

We do not recommend the technique of intentionally flooding the engine by running the boost pump with the throttle wide open and the mixture rich and then attempting a start with the mixture at idle cutoff while moving the throttle slowly until the correct mixture is reached, and enrichening the mixture when the engine fires.

Intentionally flooding the engine means running fuel onto the ground under the engine—creating a very real fire risk. When the engine is overprimed, it’s not unusual to get a long gout of flame out of the exhaust stack when the engine fires. It usually, but not always, wraps upwards around the cowling and happens so fast that the pilot doesn’t notice it during daylight hours. That can—and has—ignited a puddle of fuel under the engine.

We recommend following the aircraft manufacturer’s technique in the POH. For most Continental engines it involves what Mike Busch refers to as a forced purge. That starts with pulling the mixture to idle cutoff, advancing the throttle to the stop and running the boost pump on high for a minimum of 45 seconds. With the mixture at idle cutoff, no fuel will get past the fuel control unit—unless it is improperly adjusted, a problem in its own right. Relatively cool fuel from the wing tank is circulated through the lines, to the FCU, driving the hot fuel back to the fuel tank and cooling down the fuel lines upstream of the FCU. The only hot fuel is between it and the cylinders.

Once the boost pump is shut off, the mixture is set at full rich, the throttle for slightly over 1200 RPM and the boost pump used briefly to prime the engine. Immediately engage the starter. The engine may turn several blades before firing. Be ready with the boost pump when it fires as the engine is likely to quit once the small amount of vapor in the lines between the FCU and cylinders gets to the injector nozzles. If the engine stumbles or quits, turn the boost pump to high until it starts running again. It may be necessary to do that a second or third time. Once the RPM settles down—it may take 30 seconds—slowly reduce power to the desired idle RPM.

In researching this article we heard from an Aerostar owner who said he’d solved his hot start problems by replacing the slow-turning factory starters on his engines with much faster turning Sky-Tec starters.

Of course, that got our attention, so we followed up and learned that while a faster turn rate is beneficial because there is prop momentum carrying the crankshaft through uneven cylinder firing, there is a point of diminishing returns. Magneto impulse couplings disengage at an RPM as low as 180 and Sky-Tec’s starters will turn up at about 120-140 RPM—so there’s not a lot of room for improvement. A faster turning starter may help, but it’s not a panacea.

We also learned that one of the unsung victims of difficult hot starting is starters. Virtually every aircraft starter has a cranking limitation and cool down requirement. The rule of thumb is that for every 30 seconds of cranking, the starter must cool down for 90 seconds.

Hot starting challenges can be minimized by assuring that all components of the ignition system are in good operating order and following a starting technique that recognizes and deals with fuel vapor in the fuel lines above the engine. We also like the available aftermarket products SlickStart for spark enhancement and iStart to meter the fuel appropriately during the start sequence.

We also urge pilots to remember that if a hot start attempt is not going well, they may be frying an expensive starter. Maybe it is time to go to McDonald’s and let things cool off.