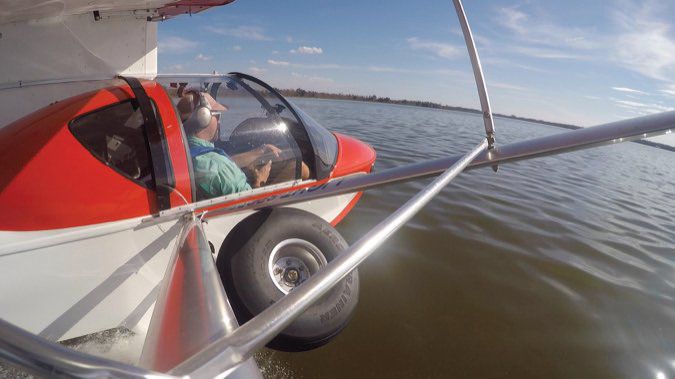 Aviation writers love to heap undiluted praise on the sheer fun of flying seaplanes. OK, I get it already. Float and boat flying is a ton of fun and you haven’t lived until you’ve done it. The question is, how to do it without spending a fortune and what to do with it after you’ve got it.

A rating course I recently completed, to be blunt, sheds light on neither, but it did serve to illuminate a poorly understood fact about the sport pilot rule: It has a gap in it that allows an easier path to getting your sea legs without the commitment of lots of training and an FAA checkride.

Over a couple of days, you can buzz around the lakes and rivers and then at the end of that, decide whether you want a formal FAA single-engine sea rating or a light sport seaplane endorsement. I went for the latter, although the training is identical. I did the couple of days with Jones Brothers Air and Seaplane Adventures on Lake Dora at Tavares, Florida. I flew a Searey Elite rented from Progressive Aerodyne, one lake over.

When the push-pull Cessna 337 appeared in 1962, the old-school FAA thought it was sufficiently different to require its own limited rating, the centerline thrust multi-engine ticket. Oddly, it makes no such distinction between floatplanes and flying boats, although the two are quite different. Earn a rating in either, and you can fly the other.

It’s best to think of a float rating as an extensive checkout. While the Airman Certification Standards for the private pilot rating has a section on water and seaplane operations, there’s no dedicated ACS. It’s just a class add- on or, in the unique case of the sport pilot rule, an endorsement similar to the tailwheel or high-performance endorsement. But there’s one odd twist.

Those endorsements don’t require a checkride nor does the FAA issue a new certificate. You get a one-time logbook endorsement from an instructor and you’re good to go. But when adding seaplane privileges, there’s a bifurcation. If you want the class add-on—airplane, single-engine sea—you complete the training and take a checkride with a designated examiner. Both the training and ride can be done in a light sport floatplane or flying boat such as the Searey. A few weeks hence, you get a new plastic certificate that confers both the class rating and, by extension, seaplane privileges in light sport aircraft.

Alternatively, you can opt for sport pilot seaplane privileges, in which case you ride not with a DPE, but with another instructor who signs an endorsement. What’s different about the endorsement, however, is that you do submit the standard FAA Form 8700-1 and, in a few weeks hence, you get a new plastic certificate. Since the training is the same, the primary difference between the SES and sport pilot add-on is the price of the checkride. This varies with operator, but at Jones Brothers, the sport pilot CFI proficiency check costs $300, the FAA checkride as much as $600, variable with examiner.

Like other companies plying the training biz, Jones Brothers offers tiered package deals on ratings with costs varying by aircraft type. A full package—aircraft rental, hotel right on the lake and lunch—costs $2495 at Jones Brothers. For $1295 (plus the checkride fee), you can do the rating in the company’s Cessna 140 on floats. In the Searey, Jones charges $1795 for the full program, plus the ride with the choice of SES or the sport pilot endorsement.

Jones’ owner Rob Galloway advises customers to plan for three days of flying. “It can be done in two days, but we like to have people plan a third day in case there are weather issues,” he says. And the weather is likely to be wind, which can stir up even

An inland lake like Dora with waves beyond the Searey’s one-foot limit. A stiff breeze also complicates docking and ramping, as I would find out when trying to ramp the Searey with a strong quartering tailwind.

It’s little exaggeration to say that seaplane training—at least amphibious seaplane training—rightly concentrates on not turning the airplane into a submarine. The training is necessarily obsessive about remembering to have the gear up for water landings and down for pavement landings. Galloway uses GIFFT as a mnemonic, for gear, instrument check, fuel, flaps and trim.

The principle skills are learning to read the water for wind direction, judging flyable sea conditions and the ever-challenging glassy water operations. The area around Lake Dora is appropriately called the Lake District and during my training with Galloway, we hopped from one to the next searching for and once actually finding glassy water.

Landing on glass is challenging because if the surface is truly glassy, it will reflect the color and shades of a cloudy or blue sky so perfectly as to give the appearance of flying into a featureless, horizonless bowl.

With no visual reference for depth perception, the glassy water technique for both float and boat airplanes is to set the airplane up in the landing attitude and then find a power setting that allows it to settle at about 100 FPM. That part is easy. Developing the excruciating patience to await contact with the water isn’t. It may take a mile or more to ease into a satisfactory touchdown.

We practiced the technique repeatedly over two days and five hours of flying. Ironically, when there’s wind—and at times, we had a lot of wind—the technique is difficult to master because the stirred up water offers good depth perception and even a light breeze spoils that perfect descent rate, requiring deft but tense throttle work.

Forlandlubber pilots, seaplanes involve learning an intriguing combination of sailing and flying, for once on the water, a floatplane or flying boat’s handling characteristics are disorientingly unfamiliar. Jones Brothers teaches in both types and although Galloway told me he doesn’t see much difference between floatplanes and flying boats, my view is that a floatplane, especially a big one, has more windage than a low-lying boat like the Searey. Floatplanes also have water rudders, which boats don’t. Further, you can dock a high-wing floatplane at a pier or a float intended for the purpose, but an amphib boat will generally have to be ramped or moored, requiring skill more related to sailing than flying.

On our second training day, a weak cold front pushed through, stirring up a nearly 18-knot breeze and whitecaps on the lakes. Naturally, this was a quartering tailwind when ramping and I learned how difficult it is to keep the airplane aligned with the ramp in such conditions.

Like a taildragger, once it departs, it weathervanes off heading with a will and the hapless pilot who fails to catch it might snag a wing or float on the dock or ramp. Paddling in isn’t always an option, although the well-prepared float pilot always has one at hand.

Is there any point in adding this rating if you’re not going to own a floatplane? That depends. Although Jones Brothers has a club arrangement to provide access to its aircraft, renting seaplanes otherwise is, for insurance reasons, a fantasy.

My rationale was more practical. I needed a flight review and since stooging around in a 172 for one of those cost close to $350 the last time I did it, adding a new rating offered more flying time and, ultimately, more proficiency. I’m not one to pretend that learning to fly a seaplane makes you a better pilot, it just makes you a seaplane pilot. And that makes it worth the bucks.

For more information, contact Jones Brothers at www.jonesairandsea.com and for more on seaplane ratings, see the March 2016 issue of The Aviation Consumer.

Click here to watch a video of the float rating course.