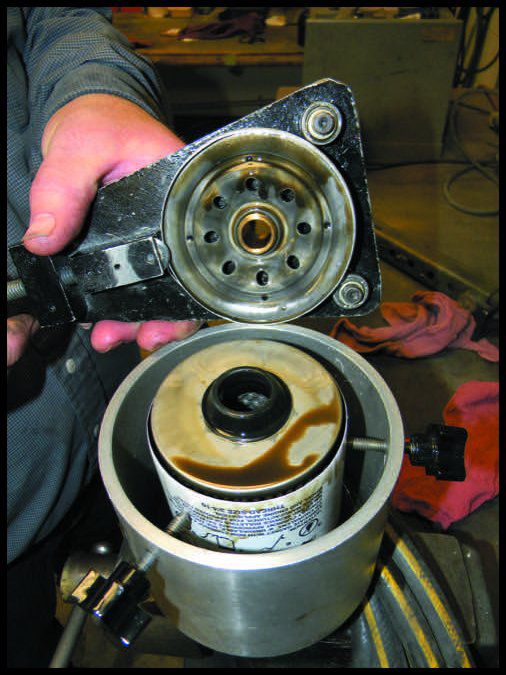 In addition to oil lab analysis, we’ve always recommended cutting open the spin-on filter for physical analysis. If the engine is shedding certain metals, you could spot them in the filter, especially ones that have trap magnets.

Curtail the troubleshooting effort and cost by tracing the metal fragments to the right part of the engine. Here’s a rough rundown of metals that end up in the filter, and their identifiable characteristics.

The most common metal that shows up in the filter is aluminum and that makes sense because a large portion of the engine—the crankcase, piston and cylinder heads to name a few—is aluminum. When a piston ring or valve guide breaks you’ll likely see aluminum. If there’s any good news, aluminum is an easy metal to identify. It’s silver and shiny, non-magnetic and hard. Try and crush it with your fingernail and it won’t deform.

A possible problem for Lycoming engines is a failed piston pin plug. You might find a bunch of thin aluminum flakes in the filter. Some engine pros refer to it as ivory snowflakes of death.

If you find very fine aluminum filings, you may be looking at a broken piston ring that’s chewing away at the ring land. If you’re finding aluminum filings that are coarse and salt-like, the failure is likely creating a grinding—maybe a loose valve guide in the head or a broken valve spring is rubbing against the guide well. If you find large chunks of aluminum that flow out with the oil, retrieve them from the catch bucket and bring them to a trusted shop for identification. Then hang on to them—they make interesting conversation at house parties.

These are perhaps the second most common metals in the engine. Get out your magnet because that’s the stone-simple way to distinguish them from aluminum. But the simple part ends there.

If traces of iron show up in an oil lab analysis report there might not be a problem. Consider how long the engine has been sitting. Rusty cylinder walls might spike the iron count, but visible evidence of iron and steel is another matter and needs to be looked at immediately. If it were ours, the engine would be grounded.

It’s possible that iron bits trapped in the filter is cam related. Grab the magnet—iron filings from the cam or cam followers are generally dark in color and latch on to the end of the magnet. A failed cam might shed fine steel that’s almost undetectable in the filter.

That’s why we like the ring magnet in the Tempest oil filter, made by Aero Accessories. The magnet is there to possibly catch fine particles of steel that might pass through the 40-micron filtering paper.

In the beginning stages of cam failure, though, the cam might shed fine iron filings that are nearly impossible to notice. This symptom is more prominent in Lycoming engines, we’re told. In a Continental you might find fine ground-up steel (it’s extremely shiny), mixed in with some bronze. This is from the rocker shaft grinding on the rocker bushing. It does a real number—once off the engine, the rocker shaft looks like someone hit it with 50 grit sandpaper.

Broken piston rings may show up as small, dull-colored iron bits. But, you’ll also find bits of aluminum because the trashed ring is also damaging the ring land by scouring it.

Engine been sitting a bit too long? Ground-up steel in the filter could be from cylinder rust. When the engine finally runs, the surface rust comes off and gets flushed with the oil. This should be a one-shot deal, until the next time it sits too long.

Gold flakes in the filter may be from any of the many bronze bushings throughout the engine. You generally don’t find bronze shavings. But if you do, checking the oil suction screen is essential. On Continental engines, you may find some long (up to two inches in some cases) bronze hair-like metal trapped in the filter or screen. It’s a good bet this is from the starter adapter spring rubbing on the gear. If you access the oil suction screen and find larger semicircular bits of bronze, it could be from connecting rod bushings that have worked out of the rod end and are breaking off in chunks.

In Lycomings, bronze nuggets could be the tach drive bushing on the back end of the cam. The tach’s T-shaped drive pin is supposed to ride in a groove in the bushing, but that groove can wear over time as the lube dries up. Initially, it may make tiny bronze flakes that increase in size and number.

Best to drop the sump and check the suction screen. If there is no other obvious source, it’s time to pull the accessory case and inspect the tach drive bushing.

The trouble with tin is it’s easy to confuse with aluminum. In a lab report, high levels of tin (and lead) might be from the babbitt on the connecting rod bearings, which is the primary place lead and tin is used in the engine.

If one side of the metal flake is copper in color and the other side is silver, you’re looking at a hunk of babbitt, or bearing metal. This is the inlay of the bearing itself and is a sign of major distress. Pinch it—unlike aluminum, it’s soft and pliable.

Tin that shows up in an oil analysis is one of those things that may mean nothing or everything, depending on engine age. With a new engine you may get a high reading for a short while, but watch out if it happens with an engine that’s well past break-in. If the bearing journals start to get wiped, catastrophic failure is almost a sure thing.

Chrome in the filter is rare and usually easily isolated to the engine’s top end. Still, it might not be easily distinguishable from aluminum. Both are non-magnetic and can appear as a whitish color in the filter. But chrome is always flat and flaky.

One test is to drop it in diluted sodium hydroxide, or drain cleaner. The pieces will dissolve if they’re aluminum. Possible sources of chrome are piston rings (the outer edges being chrome plated), exhaust valve stems (on Continentals) or cylinder barrels, when the cylinders are chromed.

Magnesium is more likely to appear in an oil analysis and probably not in the filter because so little is used. Magnesium particles look much like aluminum, but are flammable and won’t react to sodium hydroxide.

We’ve heard there’s a correlation between Bendix 1200 series magneto bearing failure and magnesium presence. That’s because a failed mag bearing may scrape the mag case enough to make particles large enough to end up in the filter. Some Lycoming engines had magnesium oil sumps.

You might find two or more different metals in the filter because one failed part may take out another—or several. You might even find non-metals in there. Carbon deposits look like coffee grounds and are usually caused by excessive blow-by.

Intended as a general guide and as a point of reference before committing to a major teardown inspection, we didn’t list all possible failure points here. That’s nearly impossible.

Last, we think creating an oil lab analysis trend spreadsheet is a good supplement and backstop to visually inspecting the filter. We’ll look at ways to create one in an upcoming report.