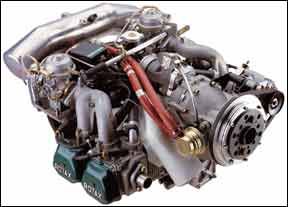 When Diamond introduced the two-seat Katana to North America in 1995, it might as well have been powered by alien technology. The 81-HP Rotax 912F3 was about as familiar to aircraft mechanics as brain surgery is to a plumber.

But all that has changed. Rotax has made serious market inroads and with the advent of light sport aircraft, it has become more familiar to maintenance shops and an overhaul infrastructure has sprouted.

In North America, there are two sources for full overhauls. Rotech Research in British Columbia owns the North American territory and in Sebring, Florida, Lockwood Aviation Supply is a Rotech dealer for overhauls. Both serve the U.S. market. There are other U.S. service centers, but none have the capability of splitting cases, although they can do heavy repairs up to building up a short block. For this report, we visited Lockwood and spoke to Rotech.

The Basics
Although the Rotax 900-series got a chilly reception in the 1990s because of its weirdness, it’s really not that weird. It’s just that it has more in common with a water-cooled motorcycle engine than a traditional air-cooled aircraft engine.

The 912 engines are four-cylinder powerplants now available in 80- and 100-HP versions, with the turbocharged 914 producing 115 HP. They have air-cooled cylinders with watercooled heads and a pair of Bing constant velocity carburetors mounted in downdraft manifold configuration do the fueling. The Rotax is remarkable for its high power output at light weight, with typical installations weighing about 125 to 150 pounds.

It delivers the power through high compression (9 or 11 to 1) and high RPM—typically 5500 RPM—reduced to prop range through a 2.27:1 gearbox. For ignition, the Rotax engines eschew traditional mags in favor of a dual capacitive discharge design that’s operated by a rotor/stator arrangement behind the flywheel. No ship’s power is required to run it. It’s not a closed loop system, but it does have electronic advance. The most recent 912s have 2000-hour TBOs, but earlier models, with improved crankcases, are limited to 1500 hours.

Overhaul Choices
Just as the Rotax engines are fundamentally different than traditional air-cooled engines, so are the overhaul and replacement choices. In reality, the decision tree for a Rotax owner seeking a replacement engine is simpler than it is for a Continental or Lycoming owner. The choices are essentially two and will be guided by price, in most circumstances. Technically, a third option is heavy repair, but we’re focusing on overhauls here.

The top money choice is a factory-new engine with everything new: cases, crank and camshaft, gearbox, cylinders, ignition system and carburetors. What the customer pays for this depends on the condition of the core submitted for credit, says Rotech’s Mark Paskevich. That much of the equation is similar to a Lycoming or Continental.

What constitutes a “good” core will vary, but Paskevich says at the top end, a core is worth about $3500 or a little more, but at the bottom end, it may be worth nothing. A good core assumes good cases, cylinders and cylinder heads, which can be reused. Crankshafts aren’t reused in new engines or overhauls. At Lockwood, Phil Lockwood told us cores are typically worth $2000.

In addition, the removal and reinstallation will typically take a day or a little more—call it another $800. To that, add any costs for overhauling or replacing the prop. This price doesn’t include any prop work, which may or may not be necessary.

Overhauls
Given the price sensitivity of the experimental and LSA markets, most buyers seem to tilt toward overhauls, which are typically priced at $12,000 to $14,000, depending on what parts are needed. If your core is worth a couple of grand, a factory-new engine will cost about $17,500, a $4000 or 23 percent upcharge against the overhaul. Compared to Lycoming and Continental, the price Delta between overhauled and factory new on a Rotax is much less.

For instance, even a modest engine such as Lycoming’s  O-320 costs nearly 70 percent more to buy new than to overhaul. Exchanges, says Paskevich and Lockwood, are good choices for owners or businesses who don’t want the downtime of an overhaul—at least a week—and who can afford the upcharge. And unlike traditional engine overhauls, where there is some latitude in what constitutes an overhauled engine, Rotax seems to keep a shorter leash on its field overhauls.

Are any options of what an owner can pick and choose? “There really aren’t,” says Lockwood. Each overhaul starts with a kit that includes a new crankshaft, valves, rings and all the seals and gaskets. The camshaft is replaced on condition, as are other parts, including the ignition components and gearbox parts. The two Bing carburetors are overhauled.

When Lockwood’s Dean Vogel heaved an old crankcase up on the overhaul bench, we could easily see why it’s spec’d for new only. Two of the counterweight cheeks were visibly misaligned, probably the result of detonation from low-octane fuel. “It’s not likely to break,” Vogel said, “but it will twist. We see this from time to time.”

What about cylinders? Can they be bored or reconditioned? Nope, says Paskevich, the Nikasil coating precludes that, but it wears so well that cylinder replacement is a rarity. Both shops report seeing cylinders routinely make TBO and some are on their second go around. We examined one set of used cylinder whose bores were smooth, with no sign of stepping.

The same can’t necessarily be said of cylinder heads, although replacement of them is relatively rare for engines that haven’t been abused.

Upgrading the case halves to the 2000-hour design is an option, but isn’t always economical. Paskevich says it’s done on a case-by-case basis (pardon the pun), but a new engine may make more sense.

“A lot of customers seem to figure the 1500-hour cases will get them through the rest of their flying career, “ says Paskevich, “so they don’t bother with the upgrade.”

Each overhaul kits comes with replacement exhaust valves; the intakes are changed on condition. The same is true of pistons. They are not considered standard replacement items, although the rings are. For as impressive as the Rotax’s overall durability is, one particular component impressed us more than any other: the gearbox. Given all the grief suffered by Thielert in trying to make a durable gearbox for its diesels, we expected similar problems with the Rotax gears. But, says Paskevich, these are routinely cleaned up, inspected and put back into service in a freshly overhauled engine.

One potential wear item is the discs in the overload clutch, which protect the gearbox and prop against damage from a prop strike. If an engine is run on 100LL without frequent oil changes, these discs can become lead-fouled and will need replacement.

This system is essentially a captive, fixed motorcycle-type clutch that remains engaged in normal service. If the prop encounters an obstacle, it slips and prevents the torque from damaging the crank or at least avoiding the need for an expensive teardown, a big plus for owners.

Although neither the Rotech mothership nor Lockwood are doing high-volume overhaul trade, the number of Rotax engines in service continues to increase at a steady pace, so we suspect neither business will suffice for customers.

Paskevich points out that shipping engines around the country and cross border is not a problem; they take care of cross-border paperwork.  Rotech also maintains a stock of used parts to give owners more options.

Finally, Rotax appears to have done what it didn’t do when the engine appeared on the original Katana in 1995: built out a service network that actually works. And with periodic training classes for owners and mechanics, Rotax familiarity continues to improve.