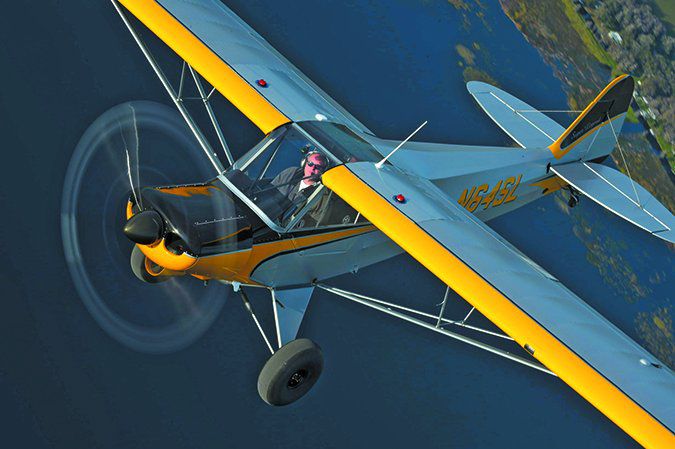 A decade ago, when the FAA and ASTM were dickering over what became the light sport aircraft rule, limitations on weight and performance—but not power—bubbled to the top of the discussion. The airplanes were supposed to be less expensive, light and simple, but the rule didn’t say they couldn’t have neck-snapping power-to-weight ratios and thus the era of the 180-HP LSA is upon us.

The latest is the Super Legend HP, which is essentially the Super Legend airframe fitted with Continental’s increasingly popular 180-HP X340 Titan engine, a stroked version of the Lycoming-style O-320 that has proven a mainstay powerplant for 60 years. This engine has found wide acceptance in the experimental market and when CubCrafters jollied it through the ASTM approval process, it became the first such engine of its type to find practical application in LSAs.

That buyers are choosing this engine in what passes for droves these days proves what aircraft manufacturers and salesmen have known all along: When writing a low six-figure check for a new airplane, owners want all the options and, no disrespect to ASTM, they don’t want pokey, underpowered airframes. Just because a would-be LSA driver will never need tundra tires and a 50-foot takeoff roll for a Saturday morning toot around the county doesn’t mean they’re not willing to pay for such things.

With its Cub-type airframes, American Legend has attracted a small but loyal customer base, plying the same market as CubCrafters, Aerotrek, Rans and Kitfox—the taildragging rag-and-tube crowd.

The airframe construction is conventional, with Ceconite 102 fabric and Poly-Tone coating over a welded 4130 fuselage cage. When the Super Legend first appeared, the company increased the size of the horizontal stab/elevator to provide about 18 percent more surface area. That’s not too noticeable just looking at the airplanes side-by-side, but it does provide some increased pitch authority. Unique to the Legend design are doors on both sides of the cabin, a welcome feature for hot-day ground ops and transformational for float work, sometimes saving the need to dance across a walk wire when docking.

With the Titan’s higher power comes higher weight and that chews into the airplane’s useful load. Hart told us the original O-200 weighs about 199 pounds and the Lycoming O-233 used in the Super Legend adds 15 pounds to that. The Titan tips in at 248 pounds, which means the airplane went on a serious diet to stay inside the 1320-pound LSA weight limit.

The heavier weight up front does shift the CG forward slightly, but it still stays within 3 inches of the forward limit when the airplane is occupied by two pilots. (The pilot weight is concentrated on or aft of the CG datum point. )

The original Legend has about a 500-pound useful load on an empty weight of 825 pounds, but the Titan-equipped HP is 80 pounds heavier than that, with an empty weight of about 905 pounds. In fact, it pushes the limit on LSA empty-weight requirements.

Realistically, with fuel aboard for more than an hour of flight, it’s a single-person airplane, albeit one with good endurance. With 30 gallons of useful fuel aboard, the airplane can steam along on reduced power at 5 GPH and cruise for five hours comfortably at about 92 to 95 MPH.

And this gets us to the dirty little secret of light sport aircraft. The arbitrarily low gross weight is the most oft-ignored rule in aviation. The blunt truth is that the experimental version of the Super Legend has a gross-weight limit of 1750 pounds. With full fuel and two 200-pounders aboard, the EAB version would still be 260 pounds under that limit. Make your own moral judgment on the advisability of doing this or not, but the airplane can be flown safely at that higher loading.

Aerodynamics being what it is, stuffing this much power into a light airframe doesn’t do much for cruise speed. Legend gives the maximum cruise speed of the HP as 104 MPH or about 5 to 7 MPH faster than the Super Legend. For cross-country flying, think of it as an 80- to 90-MPH airplane and plan accordingly.

But takeoffs, well, they’re something else entirely. The company claims a minimum takeoff roll of 35 feet, followed by a maximum climb rate of up to 2000 FPM.

That takeoff performance may be achievable with the proper technique, but it requires a bit of nerve, using power to jack the tail up—against the brakes if you’re sporty—and hauling the airplane off the runway with an abrupt tug. We might have used 100 feet of runway without trying very hard.

Similarly, with two aboard, we climbed at 1500 FPM with no heroics required. But that also means you get to pattern altitude by the turn from crosswind to downwind and better grab a handful of throttle reduction to keep from overrunning the altitude.

Although the Cub airframe wouldn’t be confused with something sleek, it actually takes determination to slow it down on final approach. With a full-flap stall speed of 28 MPH, the airplane can be flown at 50 MPH or even slower on short final. Getting there takes effort, however, because until the airframe is dirtied up and slowed up, all it wants to do is glide.

A max-performance short-field landing with full flaps and power on can get the airplane into a postage-stamp runway. With its surplus power, there’s little worry about getting unrecoverably behind the power curve.

The demo airplane we flew was equipped with Desser’s 28-inch tundra tires and these may or may not absorb bounces on landings. They’re mounted on 8-inch rims from Grove. Frankly, we’re not fans of these big tires unless they’re necessary for operating over rough or soft terrain. They make the airplane more difficult to ingress and egress and, in our view, seem to move the center of mass higher, making the airplane feel less planted during ground handling.

The Grove brakes are powerful and require deft footwork because they’re more than capable of putting the airplane on its nose. And indeed, that happened on another press demo flight, although it wasn’t clear if it related to brake application. The airplanes can be fitted with either toe or heel brakes.

From the front seat, we found the heel brakes a little tricky to apply because of the distance from the rudder pedals to the brake pedals. That’s probably a good thing to avoid the aforementioned nose prangs, but toe brakes have the advantage of being easier to get to and apply gently for a pilot used to them.

Cabin appointments in the Legend HP are comfortable, if not luxurious. The seats are the same weight-saving bungee designs Legend introduced in the Super Legend. The windows open in flight, held fast by a new clip that’s easier to use than the previous design. Visibility in flight and on the ground is excellent from the front seat. There’s no need for S-turns. One thing we would like to see improved is the hinge point for the flap handle. It’s almost aligned with the pilot’s shoulder axis and we found it awkward to manipulate for that last notch of flap. A forward bend in the handle might help.

With the higher-performance airplane comes a higher price, of course. The base price for the Legend with the classic Cub cowl is $136,900, while the Super Legend base is $154,900. The Super Legend HP starts at $164,900 and the version we flew—with Garmin avionics, Trig ADS-B Out, AeroLED landing lights and a leather interior—spec’d out at $195,000. For more information, contact American Legend.

Stroking More Power From the O-320

Stroking an engine is the classic hot rodder’s technique of coaxing more power out of an engine by modifying it. But tinkering with the basic geometry of crankshafts, connecting rods and pistons requires manipulating a complex set of variables.

When ECI—now a Continental unit—went at it, they decided to keep it simple by increasing the stroke of the O-320 marginally solely by machining the crankshaft journals to a different size and thus was born the X340 experimental engine. According to ECI’s Bob Looper, the company originally had in mind a high-performance mod for the Cessna 172’s O-320. When the engine was at overhaul, the crank could be replaced with the stroked version, increasing displacement and horsepower without requiring a 360 upgrade.

That project still hasn’t sifted through certification, but in the meantime, the X340 has become the most popular engine in the company’s Titan line and has spawned a stroked version of the O-360 called the X370. For homebuilders, these are highly customizable engines. Continental offers choices in crankshafts and cases, accessory cases, electronic or magneto ignition systems, constant-speed props and several fuel injection systems. Although engines offered for the LSA market are similar, there’s less variation in accessories.

For its version of the 340 strokers, CubCrafters joined then-ECI to lighten the engine and guide it through ASTM approval. Working together, the companies lightened the 340 with a lighter accessory case and a smaller, lighter sump that has less oil capacity to save weight. That engine became the X340CC, which is unique to the Carbon Cub. The X340s used in other LSAs, including the Super Legend HP, are slightly different and are a bit heavier, lacking the CubCrafters’ proprietary lightened sump.

On a power-to-weight ratio, the benefit of stroking is obvious. The dry weight of the X340, at 180 HP, is 245 pounds, according to Continental’s data. A stock Lycoming O-320, at 150 HP, weighs between 244 and 255 pounds, depending on model and configuration. The power-to-weight Delta isn’t huge, but it goes in the right direction, making the X340 the torque equivalent of an O-360.

Continental’s Looper told us that other than increased torque, the X340 is identical to the O-320 in all respects, including RPM and operating temperatures. In addition to two stroked models, the Titan line includes three conventional configurations of popular Lycoming displacements, the O-320, O-360 and O-540.