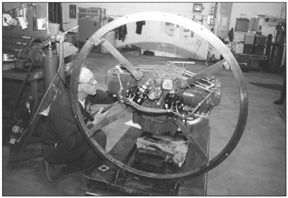 When Illinois flight school and maintenance shop owner Brian Olofsson ordered a factory overhauled Lycoming engine from Air Power Inc. earlier this year for a customer, he said he was told it was business as usual. As Air Power proclaims from ads in most major aviation publications, you send in your old core for exchange and get the off-the-shelf new engine for $300 over invoice, plus taxes and shipping.

Yes, the customer or someone from his staff signed a document saying they were aware of Lycomings core exchange policy and that there could be a charge back if there were any unserviceable parts. But nobody had ever heard of Lycoming assessing a core charge, even when obviously damaged cranks and cases were returned. For years, everyone has known Lycoming looked the other way.

Old Policy, New Light
As Olofsson and his customer discovered, Lycoming has changed the way it does business on rebuilt and overhauled engines. It decided last January to dust off the core policy and begin strictly enforcing it. Now, if you dont go into an exchange deal with your eyes open, you could be surprised by a bill for thousands of dollars above the basic cost of the engine.

If we had known this policy had taken effect, we might have considered other options for the engine, said Olofsson. As it turned out, on September 1, more than three months after the order was placed and long after the new engine was installed and flying, the customer was notified that the crankcase of the exchange engine had a crack in the deck web of the #5 cylinder.According to Lycoming standards, a crack in that, or any other stressed section of the crankcase, cant be welded. In Lycomings eyes, that made the case scrap metal. The customer was sent a bill for $4000, which added more than 25 percent to the original cost of the engine.

Olofsson hit the roof. He had his lawyers lined up ready to defend his client against what he considered a deceptive practice on the part of Air Power and Lycoming. But his customer didnt want the hassle. He paid the bill and left Olofsson fuming on the sidelines of a fight he wasnt prepared to let go. He complained to both Air Power and Lycoming. Hes apparently not the only one whos been surprised by the core charge but he said Lycoming wouldnt tell him how many people have received invoices.

For its part, Lycoming makes no apologies about the policy change.Spokeswoman Karla Sexton explained that the company has always reserved the right to levy the core charges but she also agreed that, for whatever reason, the policy was rarely enforced. Last January, however, Lycoming brass decided it had had enough of the revenue leakage from unserviceable exchange parts and the core policy has been enforced since then.

Its important for us to get the best possible value for our shareholders, said Sexton. The world has gotten to be more competitive.Lycoming notified its distributors of the changes but its possible that they werent taken all that seriously. After all, nobody could ever remember a core charge being assessed. But if they didnt believe it then, they believe it now and its clear that both Lycoming and distributors have been hearing from customers infuriated at receiving hefty charge back invoices.

Explain This
Some Lycoming customers have requested a more detailed explanation of exchange core serviceability requirements and additional information regarding charge backs for inspection failures and late core return, Todd Stoner, Lycomings VP of sales and marketing wrote in an October letter to distributors. He told the distributors that as of January 5th, Lycoming will not accept exchange engines from any of its distributors without a declaration signed by the customer that he or she has read, understood and accepted the core policy and the possibility that there will be charge backs.Air Power isnt waiting until then. Its already run off copies of the declaration and will require them as of December 1st.

Lycoming Decides
The policy itself has some eyebrow-raising clauses. For instance, all of the acceptance standards are set by Lycoming and it categorically rejects many types of field repaired parts and other parts that meet FAA standards. In fact, it will reject any part with another companys identification mark (such as any of a number of FAA-approved overhaul and repair shops), regardless of the condition of the part. The rationale is that some field repairs done by shops that Lycoming considers unacceptable might not be detectable and its unwilling to take the chance.

Perhaps the most controversial aspect of the policy is that Lycoming will scrap, without consultation with the original owner, parts it considers to be obviously unairworthy. Lycoming alone gets to make that call. If it finds parts that dont meet its own quality control standards (say welded cases) but arent obviously unairworthy-again, in Lycomings judgment-the customer, through the distributor, can get the parts back within 21 days of the distributor being notified. Dont try to sneak the same parts back at a later date, though. All the numbers are recorded.

In his letter, Stoner says Lycoming wont compromise its own standards or what it perceives to be the expectations of its customers under any circumstances. We realize that FAA-approved repair stations are permitted to accept as airworthy some field-repaired parts and some parts that would not meet Lycoming tolerances, Stoner wrote. Lycoming, however, does not compromise the integrity of engines we warrant or the safety of those who depend on them by permitting the reuse of any part that fails to meet our own strict manufacturing specifications and standards. So whats the bottom line if the engine you send for exchange doesnt meet Lycoming standards? On four-cylinder engines, a rejected crankshaft will result in a $3500 charge back and an unserviceable crankcase will cost you $3000. On the sixes, a bad crank is worth $4500 and a faulty case $4000. Eight-cylinder cranks and cases each cost $12,500.

And dont be late getting the core to Lycoming. The company allows 60 days from the invoice date to receive the exchange engine. If its a month or less late, the core credit will be reduced $500. If its six months late, it will cost you $5000 and if its more than six months late, theyll simply ship it back to you collect.

Air Power Inc. (a subsidiary of Van Bortel Aircraft, of Arlington, Texas) claims to be the worlds largest distributor of Lycoming factory rebuilt engines and spokesman Howard Van Bortel says that, overall, Lycomings new stance on the core policy is good for the industry. He maintains that enforcement of the core policy is an expression of Lycomings aggressive commitment to improving its quality standards. He noted that when hundreds of crankshafts in high-horsepower 540-series engines had to be recalled a couple of years ago, the company swallowed a $40 million bill to fix the engines and provide alternative transportation for aircraft owners suddenly grounded.

At the same time, Van Bortel concedes that Lycoming could have done a better job of selling the policy shift to its customers, illuminating its quality control standards and the reasons it wont accept damaged or repaired cores. When you realize what youre getting, its still such a deal, he said. But while Van Bortel, for obvious reasons, defends Lycomings position, others are free to speculate on the impact of Lycomings policy shift.

Like you, were hearing horror stories, said Allen Weiss, of Certified Engines, a field shop in Opa Locka, Florida. He said theres lots of talk about the policy within the industry and although numbers are hard to nail down, many buyers are getting dinged with surprise core charges. Weiss said an obvious potential result is that FAA-approved overhaul shops will see an increase in their business. Were assuming its going to be a big boon to the overhaul shops, he said. Its good for the engine overhaul business but, its a shame, I dont think its good for the industry.

But Van Bortel said the overhaul shops routinely reject unserviceable components as part of the rebuilding process; replacements or repairs just become part of the final bill, rather than a separate charge. He said the industry needs a strong factory component to the engine overhaul business and hed hate to see a major shift to the independent shops that threatens the factory overhaul sector.

Lycoming is, of course, perfectly justified in assessing core charges, in our view. However, buyers should know that enforcement of the policy is at Lycomings whim. Where a field shop might dicker on repair or replacement of an expensive major component, Lycoming wont.

Thus, buyers of Lycoming overhauls and remans should realize they retain little control of the process and the factorys definition of quality could add a third to a half again as much to the overall invoice. Caveat emptor.