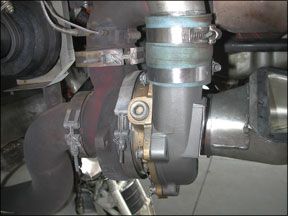 Pity the poor turbocharger: It sits in your engines exhaust stream, subject to extreme heat and corrosive gases, spinning at up to 120,000 RPM, boosting manifold pressure. Pity also the turbocharged aircraft operator, since he or she gets to pay for maintaining and overhauling the turbo, its controller and its wastegate.

Although turbos often last as long as the engine itself before needing overhaul, they also can need attention well before scheduled TBO. And, even if the engine doesnt need work before an overhaul, you might want to consider overhauling the turbo halfway to the engines TBO anyway. Its sort of like paying it forward. In some cases, problems with the engine can mean turbo issues, too, since they share the same lubricating oil; what gets into your engines oil also can get into your turbo. Whether your turbo is sent out for overhaul with the engine or removed before TBO after a routine inspection uncovered a problem, there are few things you need to know and decide before giving the shop a go-ahead for work.

For new turbos and parts, theres only one manufacturer: Kelly Aerospace, which over the years acquired both Rajay turbos and the Garrett Aviation turbocharger .line, tthe latter of which also carried the AIResearch label. Both product lines went through many hands over the years before winding up with Kelly.

Another area where your choices are limited is in picking an overhaul shop. Where there are many engine rebuilders and overhaulers, including boutique and factory shops, scattered around the country, we found only three organizations doing turbo overhauls. When the shop sends out your turbo for work, it likely will be shipped to one of these overhaulers. Thats the bad news.

The good news is the turbochargers used in general aviation aircraft are relatively simple. Theres not that much to go wrong with them in operation or to change out during an overhaul. Unless you overheat your turbo, an oil line gives up or it suffers foreign-object damage (FOD) from the engine puking something into the exhaust, its not likely to fail outright. Over time, however, it can lose efficiency as heat and corrosive exhaust gases ,take their toll on the turbine side. Poor inlet air filtration erodes the compressor side.

Simple or not, turbos can fail and that usually means a bad day for everyone aboard. Consequently, Kelly Aerospaces Randy Knuteson strongly advocates regular inspections, between annuals and during the TBO run. “We hold to the opinion that IAs and mechanics should carefully evaluate the condition of these systems at 50-hour, 100-hour and annual intervals in accordance with industry accepted inspection standards. Surprisingly, even some daily preflights require a visual inspection of the mounting brackets and hardware that secure the turbocharger to the engine or airframe and a search for any indication of oil, air, or exhaust leakage.

The bottom line, he added, is that “if a turbocharger component is nearing TBO, it is wise to err on the conservative side and overhaul the unit instead of simply repairing a part. An ounce of prevention is much better than a pound of cure, right?”

But that doesnt mean just anyone can open up a turbo and overhaul it. Knuteson tells us anyone working on one of his companys turbos should have Kelly overhaul manuals and not be afraid to use them. Those publications “clearly require the replacement of specific parts,” Knuteson said. “These parts must be replaced with new, in order to truly qualify as an overhaul and not merely a repair. If the mandated parts are not replaced 100 percent, the 8130 return-to-service document must state that the component was repaired and not overhauled,” he concludes.

One real question, though, is whether to overhaul a turbo when it goes to the shop, or just do an inspect and repair as necessary (IRAN) job on it. Another question is when to send it out–at the engines overhaul or more frequently. Lets tackle the first one first.

One answer to the overhaul vs. IRAN question depends on when was the last time the turbo saw a shop. According to Knuteson, Kelly Aerospaces overhaul manuals specify “the time between overhaul…shall coincide but not exceed the TBO (in hours time in service) published by the engine manufacturer for the specific engine using the turbocharger.” In other words, the manufacturer recommends overhauling a turbo-and its associated components-no less frequently than you would the engine itself.

Another answer comes from Ovette Mitchell, chief inspector for Quality Aircraft Accessories, a turbocharger overhaul shop. “Some companies will do an IRAN, but its not something we like to do. Once its apart, we might as well do everything,” he adds.

Kellys Randy Knuteson concurs, saying, “In the case of a low-time turbocharger, a repair may be made and the unit returned to service under an 8130 stating that the unit was repaired.” But, Knuteson stresses such work, whether called an IRAN or not, should not be considered for a high-time turbo, one coming in off an engine being overhauled: “In no case would we allow the return to service of repaired turbocharger components on a freshly overhauled engine,” he says.One expert with whom we spoke suggested pulling and overhauling the turbo and related components at the engines TBO midpoint. “We have often suggested to our customers its a good idea to change out turbo components at 1000 hours,” he told us, adding that its always better to be safe than sorry. Too, he says, turbo overhauls arent expensive when considering an otherwise healthy unit.

Quality Aircraft Accessories Mitchell didnt disagree, but simply told us a turbo should last to the engine TBO. Variables working against a turbo making it to TBO are familiar ones: how its operated, the environment and the engines oil change frequency.

For example, if the pilot is relatively ham-fisted, quickly running the throttle from near-idle power to full and back again several times each flight, the turbo likely will need work sooner instead of later. Same for operating it in dusty or extremely hot conditions. And, if you like to stretch out the time between oil changes, perhaps in the belief that needing to add a quart every 10 hours or so makes the engine oil “self-changing,” you probably should budget for a turbo overhaul more often (not to mention boning up on your engine-out skills).

No question about it: If youre overhauling your engine, make sure the turbo and its related components go out for an overhaul, also. All things considered, theres not that much money involved-the most-expensive new-manufacture turbo in Kellys current list price is $5500 and overhauling it will be a lot less, presuming its in good condition. Considering those prices, and the possible outcome of a turbo failure at high altitude, its cheap insurance.

In our view, an IRAN on a turbo at or near its TBO isnt worth the time and effort. For not much more money, doing the full turbo overhaul likely means you wont have to do any other work on it until your next engine.

And youll save the R&R expenses, plus another possible mid-TBO overhaul or IRAN in the bargain. It just makes more sense, once the unit is out of the airplane, to do the full deed.

The thornier question involves a top overhaul or having the exhaust system apart for other reasons. In our view it makes more sense to only do the R&R work once, wrench everything back together and fly off with the peace of mind youve done all you can do to ensure the engines reliability the rest of the way to TBO.

The only time an IRAN makes sense to us is if the turbo has a problem, and youre only a couple hundred hours from the engines TBO. Or, if youre planning to sell the airplane, in which case it becomes someone elses problem.