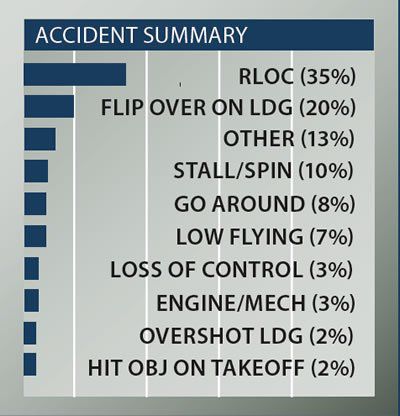 Now the bad news—some 65 wrecks were on landing (10 of those involving floatplanes on water). While we expect 40 to 50 percent of accidents for tailwheel airplanes to involve landing problems, there’s something about the Husky that leads pilots to grief at a surprisingly high rate on landing.

We can’t help but wonder if landing gear geometry plays a role as 20 landing accidents involved pilots flipping their airplanes over on rollout—a significantly higher rate than we’ve observed on any other tailwheel machine. One pilot even managed to flip his Husky on takeoff. Almost all of the events involved flipping the airplane inverted, rather than just up on the nose, and most were done with the brakes.

One of the flip-over accidents involved the airplane hitting something (a hole) on the runway. Two flip-over adventures occurred when pilots landed in snow that was deeper than they thought.

We also have to attribute a percentage of the landing accidents to testosterone poisoning. That may draw some pilots to the Husky in the first place. One pilot had set the parking brake so he could make a number of “water ski” passes—touching the main gear to the surface of a lake. You got it—he forgot to release the parking brake.

A number of landing accidents took place in remote areas where the terrain turned out to be less inviting on rollout than it had appeared from the air. Three pilots who landed on roads couldn’t keep their airplanes on them—a 12-knot quartering tailwind didn’t help at all in one loss of control accident.

There were only seven low flying crashes—we think the low stall speed and power-to-weight ratio of the Husky kept that number from being higher. Nevertheless, pilots were able to demand even more performance from their Huskies than was built in. One pilot regularly did a hammerhead turn shortly after takeoff until the time he didn’t have quite enough altitude to recover. Another pilot took his passenger with him across the Styx after buzzing a lake and people on shore for 15 minutes, doing some water skiing and then stalling and spinning into the lake after one of his steep pull ups.

Three pilots crashed, and survived, while practicing flight just above the ground in rugged areas. Two hit downdrafts crossing ridgelines and couldn’t recover before impacting terrain and one stalled into the ground while doing turns in a canyon. There are benefits to a low stall speed and good restraint system.

The peril of glassy water was a factor in most of the floatplane accidents. In one, the airplane hit so hard the floats were ripped off.

A pilot trying to shoot a coyote from his Husky said his shotgun jammed. He lost just enough altitude in the subsequent steep, repositioning 360 to hit his own wake turbulence. He hit the ground before he could get another shot off.