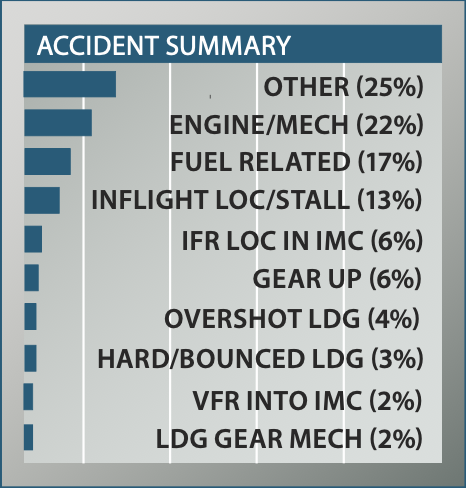 In looking at the 100 most recent Beech A36 Bonanza accidents we came away impressed by the low. number of runway loss of control (RLOC) events – two; landing gear mechanical issues – two; and general landing-related mishaps – six.  The good manners of the long Bonanza around a runway meant we didn’t see any of the things we’re used to seeing with other airplanes such as botched landings where the pilot go sideways, went around and hit something or stuck a wing in the ground trying to deal with a crosswind.

On the bad news side of the equation, while the engine/mechanical count of 22 was not out of line, at least a quarter of the events involved maintenance malpractice.  Not torquing through-bolts correctly after cylinder replacement destroyed three engines and reusing what turned out to be a corroded exhaust valve spring from a cylinder that was lying around led to a fatigue failure of the spring and an airplane sliding to a stop in the dirt.

We think that the rate of fuel-related engine stoppages – 17- is high and that there may be an issue with pilots understanding the fuel system.  Fewer than half of the power losses were due to fuel exhaustion; the rest were pilots running a tank dry and not getting a restart after changing tanks.

In at least some of those accidents, it appeared to us that the pilot “riched out” the engine by turning on the aux fuel pump.  That may have been because the pilot didn’t get a good checkout n the specifics of the Bonanza fuel system and how its two fuel pumps work.  If the engine-driven fuel pump is working and the pilot turns on the aux pump, the engine isn’t going to run unless the pilot either leans the mixture or shuts off the aux pump.

An A36 is a slippery, high-performance machine, yet there were fewer than 10 spiral-dive type inflight loss of control accidents, a rate consistent with good handling and good pilot checkouts, we think.  Nevertheless, two pilots new to the type and the avionics suite, with checkouts in VFR, lost control in their first IFR flights in IMC.

Of the 13 VFR loss of control accidents, nine involved the pilot stalling the airplane,  Two were on approach while dealing with a problem such as an open door.  The rest were on climbout shortly after takeoff due to such things as short fields, downwind, heavy and/or into thunderstorm.

Two pilots died inotherwise survivable accidents because of head injuries.  One didn’t wear his shoulder harness; the other hadn’t replaced a bably worn shoulder harness and it broke.

An A36 flies just fine with the cabin door or emergency exit window open.  Not all pilots are aware of that fact.  Some get in trouble trying to deal with the side issue rather than flying the airplane.  A pilot who used paper towels to stuff a gap under his emergency exit window had the window pop open after takeoff.  Thinking the autopilot was on as he wrestled with the window, he noticed his mistake when he saw a windshield full of ground.  He pulled out successfully but then realized that he was about to hit power lines.  Closing the throttle, he put the airplane into a field under them.  He survived.