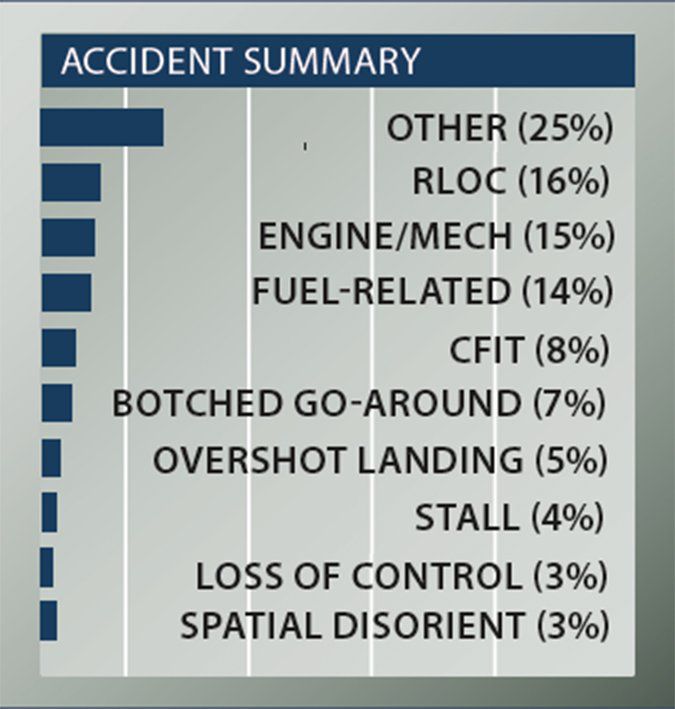 When we looked at the 100 most recent accidents for the Archer/Cherokee 180 series—50 for each model—we saw some crunch causes we expected and a few we didn’t.

First, in an airplane often used as a trainer, we expected to see a significant number of landing-related accidents. We did. Thirty percent of the airplanes came to grief due to either runway loss of control (RLOC), hard landing, runway overshoot or a botched go around. We didn’t expect to see that of the 15 RLOC accidents; only two were in Cherokee 180s, the rest were Archers. As the airplanes have essentially the same landing gear, we are puzzled as to how the only major difference between the machines—the wing—could have anything to do with the proclivity of Archer pilots versus Cherokee 180 pilots to lose control on rollout.

We are fans of the 180-HP Lycoming engines that power the 180/Archer line, so we didn’t expect to see 15 percent of the accidents due to a problem with the engine. A closer look at each event caused us a sigh of relief. One accident was due to the prop flinging half a blade after a long-progressing fatigue crack let go. Lack of maintenance was the culprit. Poor or no maintenance was the cause of the majority of engine stoppages—an oil filter wasn’t tightened in one case; in several either the engine overhaul was done improperly or a new cylinder wasn’t installed correctly. Reading some of those reports reminded us of the need to be cautious on the first flight after maintenance.

Twelve pilots ran their airplanes completely out of fuel, a few times after amazingly optimistic flight planning. Two pilots were flying low enough that when they ran a tank dry, there wasn’t enough time to switch tanks and let fuel in the good tank replace the air in the fuel lines before ground contact. The fuel selector on one airplane had deteriorated so badly—an AD on it had been ignored—that the pilot couldn’t find a detent and positioned it to cut off fuel flow to the engine.

That there were eight CFIT crashes got our attention. Four were at night, the pilots flew into the ground in areas of few lights. One instructor and student decided to fly below the rim of a canyon, upstream, despite having carefully plotted their route prior to the flight and noting ground elevations. Eventually they couldn’t hit rising terrain. Trying to scud run claimed two pilots. Each had ignored an IMC forecast. One hit trees while trying to make a 180.

There may be something deceptive about the wings on Archers. In five cases, pilots hit other airplanes, a pole or a hangar while taxiing.

Density altitude brought two Archers to grief. Even though they were loaded below gross weight, they could not climb after takeoff and were facing rising terrain. In one case the DA was over 10,000 feet. The pilot said he didn’t think he leaned the mixture correctly.

We were impressed with the determination of one pilot. He aborted a series of takeoffs because he didn’t think the engine was making power. On the fourth try he got off the ground before deciding the power wasn’t right and aborted. You can see the conclusion coming—he tore up the airplane when he ran into obstructions off the end of the runway.