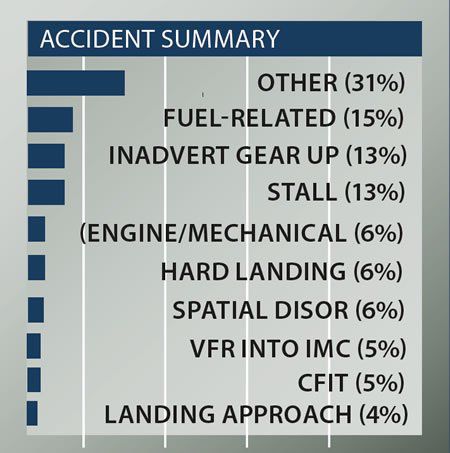 The NTSB reports of the 100 most recent B55 Baron crashes turned up some unexpected results: there were only three runway loss of control (RLOC) events, far fewer than we expect for tricycle-gear airplanes; for an airplane with a fuel system that has a reputation as simple, the majority of the 15 fuel-related accidents involved mismanaging the system and fuel selectors and over half of the pilot-induced gear-up events involved retracting the gear on rollout.

We have long been impressed with the landing gear design on the Baron—it doesn’t take a rocket surgeon to maintain. Only two of the Baron accidents involved a system failure in which the pilot could not get the Firestones down and locked.

We’re less impressed with the design of the landing gear handle/pilot interface. It has allowed pilots to retract the gear while on the ground at a rate higher than any other airplane we’ve reviewed—probably thinking they were raising the flaps. While inadvertant gear retraction carries virtually no risk of injury, it causes expensive damage. We think Baron pilots should be aware of the situation and make an extra effort to not touch the flap switch until off of the runway on landing and seriously consider not doing touch and goes.

Six Baron pilots ran their airplanes out of fuel, including one who couldn’t figure out how to shoot an LDA approach and elected to divert to another airport even though he didn’t have enough fuel on board to make it. Nine pilots either tried to take off with the aux tanks selected—they’re for level cruise only—or ran tanks dry and then didn’t select tanks that had fuel in them.

Improper maintenance of the fuel system led to two explosions and one fire when the pilot went to start an engine and wasn’t aware of a maintenance-induced fuel leak.

Four pilots shot approaches to well below published minimums in awful weather. Three flew into the ground or water. One missed the approach after the controller gave a low altitude alert, but succumbed to spatial disorientation and a diving spiral during the miss.

A Baron is no slouch in the cruising speed department, yet no fewer than five pilots tried to scud run in their aerial hotrods. As might have been predicted, their attempts at VFR into IMC did not succeed.

There were six engine power losses for unexplained reasons, fewer than we expected to see. Nevertheless, in a few of those events, as well as in some of the fuel-related engine stoppages, the pilot did not feather the prop on the silent engine, contributing to a return to earth other than on a runway.

The unconventional (for general aviation) arrangement of the prop controls and throttles caused one pilot to inadvertantly shut down both engines while dealing with an open cabin door. He thought he’d pulled the throttles to idle, but had instead feathered both props, stopping the engines. Lacking unfeathering accumulators, he could not restore the props to a blade angle that allowed generation of thrust and had to glide to a landing.

Nine pilots inadvertantly stalled their Barons in flight and entered spins from which they could not recover, including one pilot who was distracted trying to troubleshoot a landing gear indicator malfunction.