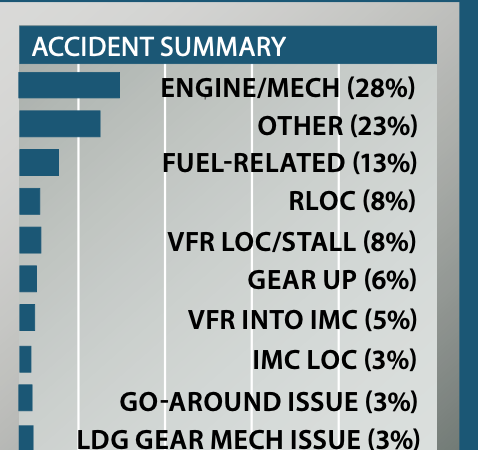 The things that struck us as we reviewed the 100 most recent Cardinal RG accidents were what we didn’t see – there were almost no bounced landing events (one) and for all the hand-wringing over the reliability of the landing fear on single-engine Cessna retracs, only three resulted from a mechanial problem that prevented gear extension.

The fixed-gear Cardinal series has a history of bounced/porpoised landings leading to firewall damage.  That simply isn’t the cse with the RG model.  Our working hypothesis is the different landing gear geometry.  No matter what it is, we were impressed by the adsence of touchdown problems with the RG.  We can’t recall another aircraft we’ve reviewed with such low numbers.  Also, we only saw two landing overshoots – and one was a student pilot on a 1500-foot strip- an unusually low number.

The good news regarding landings in the 177RG continued in a low rate of runway loss of control (RLOC) accidents, only 8 percent.  We’ve always liked the Cardinal RG’s crosswind capability – the low RLOC number seems consistnet with that opinion.

While six inadvertent gear-up slides to a stop is about average for retractable-gear airplanes, we have to go back to the near absence of landing gear mechanical issues.  That’s a solid indication of good system reliability rather than especially good maintenance.   We think that’s true because we saw strong evidence that Cardinal RGs, overall, haven’t been subect to outstanding maintenance.  It shows in the rate of engine/mechanical-related accidents.

Engine stoppages led to 28 forced landings with airframe damage.  Of those, the majority were because of maintenance that was performed improperly.  Maintenance guru Mike Busch has written about the risks of cylinder replacement.  He might have been referring to the Cardinal RG.  Ten catastrophic engine failures were caused by imporper cylinder installation – usually failure to correctly torque belts.

The single-drive magneto on the RG’s Lycoming engine has come in for criticism.  We saw three magneto failures, but only one was of the drive.

At 13, the fuel-related accident rate seemed high.  There were no reports of pilots running a tank dry and not getting a restart.  (Early RG’s had an off/on fuel system; later ones had left/right/both selections.). All but two of the accidents involved pilots running out of gas- we can’t help but wonder if poor fuel quantity indicators played a role.  There were two water contamination accidents.

One pilot reported that he had to keep “increasing the mixture” on a hot day to keep engine temps down.  He increased the mixture until he ran out of fuel.

Of the eight VFR LOC/stall accidents, most were on takeoff and often at high altitude and/or over gross weight.

The drag of the gear is low, so there’s no hurry to retract it.  Two pilots discovered that reality. One had the engine quit soon after lift-off.  He didn’t have time to put the gear back down before landing on the remaining runway.  The other caught some wind shear after gear retraction and hit the left tip of the stabilator on the runway.