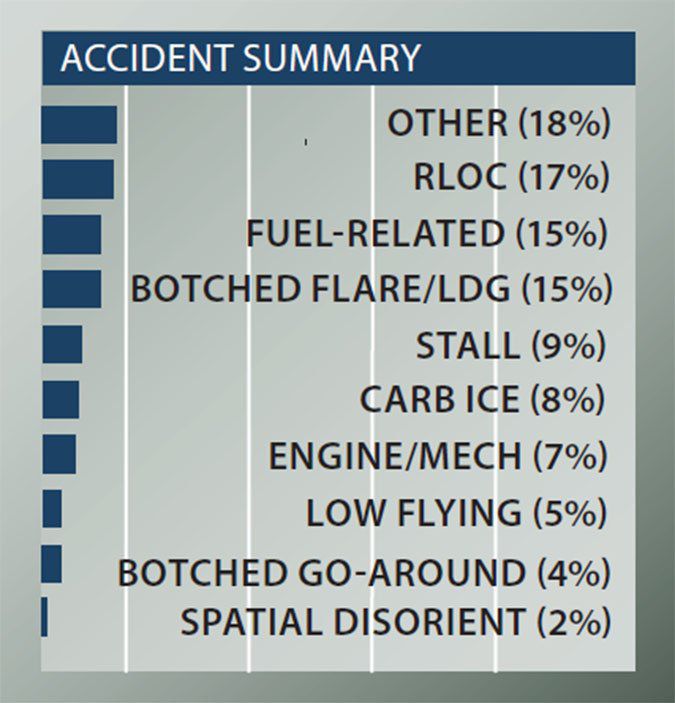 As would be expected in an airplane widely used as a trainer, our review of the 100 most recent accidents involving the Cessna 150/152 series found that 38 were landing-related. A breakdown of those numbers revealed some interesting details: There were two pilots who couldn’t get stopped on the available runway—quite a feat for an airplane with massive flaps and a slow approach speed.

There were 17 runway loss of control (RLOC) accidents—a number we think is low for a trainer. To us, that indicates excellent control authority and ground handling in crosswinds. We note that at least three of those accidents were in tailwheel-converted machines. We’ve observed that the handling qualities of the various conversions (and how well they are carried out) can vary widely.

Four pilots cracked up on a go-around, another number we consider to be low, as go-arounds are a staple of student training. The low number indicates to us that the airplane handles the maneuver well despite its modest power.

We raised our eyebrows at the 15 accidents in the botched flare/landing category. All of those involved a bounced landing and then PIO or porpoising and, usually, breaking off the nose gear—13 of them were in 152s. Because the airframes of the 150 and 152 are nearly identical, we’re curious about this data point.

There were surprisingly few engine/mechanical events. Of the seven, one pilot got distracted while doing his own oil change and forgot to put in any oil. His next flight was fairly short. Oil exhaustion brought down a 152, although the pilots swore up and down they’d checked the oil prior to flight. Two engines quit not long after maintenance because the mechanics did something wrong. The cause of the other three stoppages could not be determined.

The 150 and to a slightly lesser extent, the 152, have a reputation for issues with carburetor ice. It was credited for eight forced landings, with damage, and may have been behind the three unexplained power losses in the engine/mechanical category. Having had a forced landing due to carb ice in a Cessna 150 ourselves, without damage, we can’t help but suspect the eight events are not all of the times 150s and 152s have landed other than where desired due to carb ice. We caution attention to the matter.

Fifteen accidents were fuel-related, with four due to water or debris in the fuel. The remainder involved pilots who simply ran the fuel system dry—many after taking off with partial fuel and trying to travel a considerable distance. A few of them had landed and chose not to refuel before launching again and running out short of their destinations.

New technology was a factor in the night crash of two friends flying VFR in a 150 while taking flash-stills of themselves with their cell phone cameras. While maneuvering at low altitude in IMC and destroying their night vision with flash photography, the pilot became spatially disoriented, stalled the airplane and spun in.