You know the routine—every month we review the NTSB reports of the 100 most recent accidents of the type of airplane featured in the Used Aircraft Guide. We then pigeonhole them by cause, looking for areas of concern for buyers and users of those airplanes. Not surprisingly, having a reasonably large number of accidents to review has allowed us to identify troublesome components or systems that increase accident risk such as fuel-related engine stoppage crashes in airplanes with multiple fuel tanks.

Then we got to the Diamond DA40. Over a production run of nearly 20 years, more than 2000 DA40s have been built and, from what we can tell, well over 1000 are in the U.S. However, when we pulled up all of the NTSB reports of DA40 accidents, we found 51. That number included such events as a pilot who improperly set the parking brake and coasted slowly into the side of a hangar while he was looking down, thinking the airplane was parked, and damage to one brake when a DA40 hit a coyote on a night landing. Those were two of several reports on events that involved so little damage that they didn’t meet the threshold to be called an accident under the NTSB regs.

We’ve noted the low accident rate of the DA40 series in the past. Our most recent sojourn through the NTSB reports confirmed that the notable thing about DA40 series accidents is their relative absence.

Not having a 100-accident statistical universe for the DA40, we’ll nevertheless look at areas where we have expressed concern with other airplanes and see how the Diamond fared.

Runway loss of control (RLOC) is, in our opinion, a powerful indicator of the quality of the aircraft’s ground handling, which is why we see a RLOC rate of tailwheel airplanes that is usually two to three times that of nosewheel machines. For the DA40 we found 11 RLOC events; all involved a crosswind and a majority also involved student pilots. That 22% of the total accidents is average for a nosewheel airplane, although our experience in the DA40 indicates that it handles crosswinds slightly better than its peers.

There were three DA40 crashes where the pilot aborted a landing and then either stalled the airplane on the go-around or stuck the wing into an obstruction. What was significant to us was the absence of serious injuries to those involved.

We think highly of the crashworthiness of the DA40 design. It was confirmed in the reports we reviewed. One involved an optimist with three passengers tracking elk in the mountains of Utah. You guessed it. He flew into a canyon too tight to make a 180. He climbed for all the airplane was worth and flew into trees on rising terrain at just above stall speed. Two occupants received minor injuries; the other two were uninjured.

A VFR pilot stuck on top dove his DA40 into a hole between clouds. Emerging at the bottom he had an up-close-and-personal view of the ground. Giving his all, he pulled up and almost made it. He hit tree-tops and came to a stop. No one in the airplane received more than minor injuries.

A pilot who was not current at night tried to land on an unlit runway. He hit a tree with a wing and spun into the ground. Again, no more than minor injuries.

Impressively, we found no fuel-related accidents and only two engine stoppage in flight events.

Sadly, a good aircraft design does not insulate it from stupid pilot tricks. One pilot, with a passenger, repeatedly buzzed a friend’s boat. The passes, complete with steep pull ups, continued until the pilot hit the water at high speed and the airplane broke up. 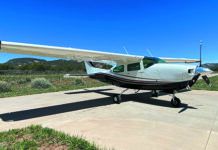