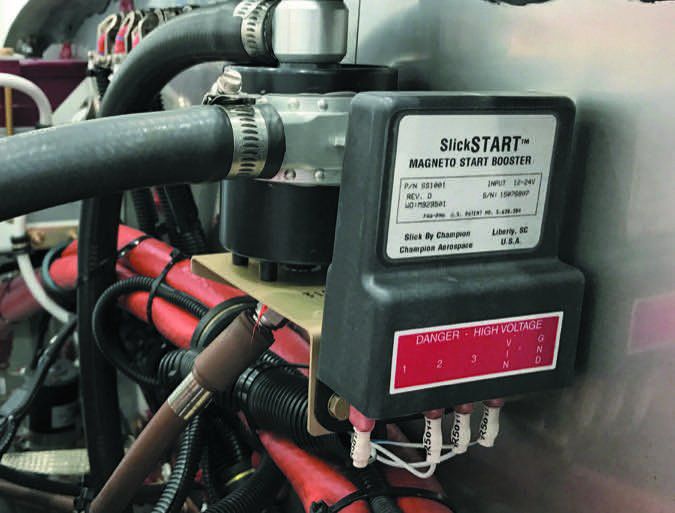 Cold starts, hot starts and over-enthusiastic priming are just some of the scenarios that can lead to an airplane sitting on the ground because the engine refuses to fire.

The best way to ensure a quick engine start is to boost the energy to the spark plugs because with enough spark, the fuel and air mixture will certainly burn. Champion Aerospace’s SlickStart magneto booster promises to do just that. Here’s how it works, plus an overview of aircraft piston engine ignition theory.

Before looking at the ignition booster concept, a review of the ignition process is in order. Because the typical piston aircraft engines are designed to turn slowly, designers had to develop a way to get the cylinders firing. This can be a real trick because a slow-turning crankshaft is not conducive to starting due to the relative effect of the spark duration. Using magnetos (which are not dependent upon the electrical system to create a spark for firing the plugs), engineers needed a way to increase the initial voltage to the spark plug.

A magneto will create a spark if there is enough rotation. The magnets move around a coil (the basis for electricity), but normal turning sometimes doesn’t produce enough spark. Back in aviation’s infancy, inertial starters and shotgun shell-like cartridges were the best way to start an engine. Eventually, impulse coupling made things a lot easier.

An impulse coupler is a spring-loaded mechanism that is usually installed on the left magneto and does two things. It delays the firing of the magneto to more of a top dead center position and when the catch lets go, the built-up energy in the spring speeds up the rotation of the magneto. Both create a much hotter spark that fires at a more optimal time in the combustion process. This is controlled at the key starter or the mag switch, opening or closing the P-lead circuit as necessary—left mag on, right mag off—to avoid the possibility of a backfire or engine kickback.

Kickback is when the piston is not quite up to the top dead center of the crank’s rotation and a premature firing of the fuel/air mixture will drive the piston backward, potentially causing many bad things to happen. When the engine begins to run, the impulse is disconnected. You can tell which mag has the impulse because of a spacer between the mag body and the harness cap. Consider that hand propping an engine could only be possible with impulse coupling.

The shower of sparks, or SOS method for starting, was originally used on the Ford Model T and later on some aircraft engines. Shower of spark systems consist of two magnetos, but the left mag has two sets of points—one in the normal advance position, and the other in a retarded position. A vibrator switch (think of an old doorbell buzzer that creates a rapid firing sequence of sparks to the coil) is usually mounted on the firewall, taking the advance points out of the loop, while activating the retarded points. Rather than one spark from an impulse coupling, there are nine to 12 sparks per sequence, providing much more opportunity for the spark to fire. These systems were on a number of Beechcraft and earlier Mooney models and are still in service.

The SlickStart was actually developed in 1997 by Unison Industries and is now owned by Champion Aerospace. Champion’s Joe Logie reinforced the variety of factors that can cause an engine to be difficult to start. Improper priming (either too much or too little fuel), frosted spark plugs, fouled spark plugs and sometimes simply the nature of the engine can make starting a chore.

Now that you understand how the shower of sparks works, think of the SlickStart device as a more modern, computerized approach to the SOS concept. By creating a long, powerful voltage for low-speed starting, SlickStart increases the length of the starter sequence while also increasing the electrical energy that gets to the spark plug by up to 340 times that of an impulse-coupled spark.

Moreover, there is inherent drag in any engine—the larger and more powerful often being the most difficult to start. This drag presents inertia that needs to be overcome in order to get things turning. Cold temps, fuel problems and cold oil are all common problems. But if there is fuel and air, then all that is needed is heat, or in this case a spark, to create fire. Getting enough of a highly charged spark to the spark plug is the trick. That’s where the SlickStart system comes in.

The SlickStart is a single module that attaches to the aircraft firewall, measuring roughly 5 inches tall and 3.5 inches wide. The device generates a shower of sparks electronically by using a capacitive discharge to store energy and shoot it to the magneto when the starter is engaged. Champion calls it a firestorm of electricity and indeed it is, as the intensity of the spark is measured in kilojoules.

The SlickStart is designed to replace the older Bendix/TCM vibrators when used with Champion’s Slick mags. It draws 5 amps of current and operates on both 12- and 24-volt electrical systems. If ordering the system on your own, be sure to check compatibility. The system comes in different versions, depending on the magnetos.

Other options include hooking it up to single and dual impulse coupled mags and single or dual retard breaker mags. For twins, one SlickStart module is required for each engine.

If you have an electronic tachometer, its lead needs to be moved to the right magneto, if compatible. One wire from the device connects with the starter solenoid so that it is only engaged when the starter is working. There are also ground and P-lead connections to the left mag, and a connection if there is a retard breaker magneto.

In our research, we found that a competent tech might install a single system in a half day. The unit doesn’t come with all hardware required for installation, including mounting bolts and other pieces.

We’ve all felt the reassurance when an engine starts quickly and smoothly, and many of us have also lost the battle by flattening batteries and toasting starters when trying to light finicky engines.

Assuming the engine is in good health, including magnetos, plugs and the ignition system as a whole, we think the Champion SlickStart can contribute to quicker starts, based on the Lycoming and Continental engines we’ve operated with it installed. Others are pleased.

Real-world feedback collected during our research was favorable and we think the $829 street price is fair, plus installation is straightforward.

Its design theory is easy to support. Regardless of the reason it won’t start, your engine is much more likely to get online if you can pour massive amounts of spark to the plug, which is what the SlickStart does.

Of course, we still wait for a modern electronic ignition system and while Champion supports the Lasar ignition, we’ve heard rumors of a replacement product in the works. There’s also Electroair, and SureFly is close to earning an STC for its SIM electronic ignition. We’ll watch this market and report on it in future issues of Aviation Consumer.

Fly an aircraft with a fuel-injected engine and chances are you’ll eventually deal with stubborn hot starts, with battery voltage and starter life hanging in the balance. Texas-based iStart has a solution with its secondary fuel injection control system, a digitally controlled priming assist system that is designed to take the guesswork out of hot-start engine priming by computerizing the start sequence.

In a nutshell, the self-contained digitally controlled iStart has a secondary fuel injection source that’s piggybacked to the engine’s normal fuel delivery system. The iStart computer samples the engine temperature, starts the fuel boost pump and injects the precise amount of fuel for engine priming, cranking and idling.

The iStart doesn’t replace the existing fuel distribution system and the plumbing is independent of the engine’s main fuel injection metering unit. Its dedicated fuel delivery lines connect to the existing fuel injector spider (distributor) after passing through a computer-controlled secondary injector, allowing fuel from both the primary and iStart system to reach the cylinders. It’s considered a failsafe system because it is only used for starting and it can’t operate when the engine is running. The computer is also connected to one of the engine’s magnetos, shutting down if it senses 100 RPM or higher. When using the iStart, the throttle is cracked, the mixture control is always in idle cutoff and the system has to be energized with a panel-mounted master switch. No, you can’t use the system for emergency engine starts in flight.

When the system is on (verified with a flashing status annunciator on the instrument panel), the iStart computer is constantly monitoring engine temperature and RPM while the engine is cranking and firing and adjusts the fuel delivery throughout the start sequence. Once the engine is running, you advance the mixture control from the idle cutoff position and set the throttle for 1000 RPM. After 10 seconds and when the engine RPM stabilizes, the status annunciator flashes and the iStart system automatically shuts down.

Once running, the engine is being fed by the engine’s primary fuel delivery system and the iStart is completely disabled.

The iStart sells for $995 and doesn’t include fuel line or fittings because not all installations are identical, as far as component mounting locations are concerned.

The iStart system has been proven on a variety of experimental aircraft over the past six years and the company has recently earned STC approval for the single-engine Beechcraft line (normally aspirated models)and also for the Bellanca Viking series. Company founder Damon Berry (who once managed Plane Power and now partners SureFly) said STC approval for Cessna singles is expected in the immediate future, with Piper, Diamond and other aircraft approvals to follow shortly thereafter. Contact www.istartair.com, 817-219-0007.

Click here to see a video on the iStart System.