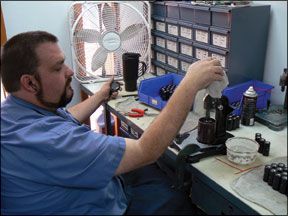 Owners buying engine overhauls have more or less adjusted to the idea that cylinders, cams and crankshafts have become a crap shoot. But valve lifters, too? These got added to the list of problem parts last fall when TCM announced that a massive batch of faulty lifters made it into the supply chain. Some

showed failure wear in as little as five hours of operation.

Although only engines built after June 19th, 2009, appear affected, the sudden demand has disrupted the supply chain for lifters to the extent that the industry-and the FAA-are relenting on the standard recommendation that lifters be replaced. Further, the market for overhauled lifters has become red hot and, at least well into 2010, they may be hard to come by. Only owners who had engines built after the June date need be concerned about bad lifters and not all of them may be affected. The problem centers on tappet bodies with part numbers of 657913, 657915 or 657916, whether purchased individually or in a parts kit. (See special airworthiness information bulletin NE-10-09 and Airworthiness Directive 2009-24-52.) Engines affected are TCM O-360, O-470, O-520 and O-550 models. An estimated 600 aircraft are currently grounded. If these engines were overhauled or had the tappet bodies replaced since the June date, the airplane is grounded until the parts are replaced.

Fallout from this AD is being felt throughout the industry. In a nutshell, TCM has no means of providing replacement parts for a few months, at least, although it shipped some emergency overhauled lifter bodies obtained from Aircraft Specialties Services, Inc., in Tulsa. TCM negotiated a waiver from the FAA to use “reclaimed” lifters as replacements in new and rebuilt engines.

Aircraft Specialties has been overhauling lifters in general since 1990 and TCM lifters since 2002. ASSI is considered the leading “steel” shop in the country and has worked closely with TCM in the past. Nevertheless, TCM spent a couple of days inspecting ASSIs process and performing an accelerated engine test run to assure themselves that overhauled lifters are quality parts.

The lifter problem will affect both factory new engines and aftermarket sales well into 2010. At press time, the only lifters available are rebuilt and these will be used as replacements for recently overhauled engines affected by the AD.

The initial reaction to this situation by shops was a degree of shock. Service Bulletin SB-97-6A, issued in 1997, calls for removing and discarding hydraulic valve lifters. Shops have been tossing the used parts into the trash for years. That the FAA would endorse reusing the old parts underscores the seriousness of the situation. Industry professionals know that parts integrity is a non-issue, since overhauled parts must meet stringent requirements.

At press time in early January, the actual reason for the problem has not been revealed. Tappet bodies are outsourced by TCM through Eaton, Inc., a company that does contract work for a number of industries. The parts had been manufactured in Brazil until late 2009, when production was moved back to the U.S.

The consensus is that the problem lies either in the metallurgy technique or the personnel who cast the blanks. The tappets are made of cast iron, using a chilled cast technology. This gives them hardness thats compatible with the hardened camshaft lobes upon which they ride. One problem with cast parts are voids just below the hardened surface which, if breached, can cause degradation of the hardened surface.

With this in mind, its logical to assume that if reclaimed tappet bodies have made it through one TBO run without unusual wear or distortion, theyre candidates for reuse. And thats exactly what ASSI does.

A major concern is a steady supply of cores for the rebuilding process. Theres a good supply of comparable parts built by Superior Aircraft Parts, but TCM will only rebuild and certify original TCM parts. Aircraft Specialties confirmed that they have an inventory of recerted Superior parts for customers who request them.

Further, regardless of the original manufacturer, ASSI has rebuilt over 40,000 lifters for TCM engines in seven years, with no warranty claims. With that in mind, we see no downside to using the overhauled lifters. Until TCM sorts this out, theres not much of a choice to do otherwise.